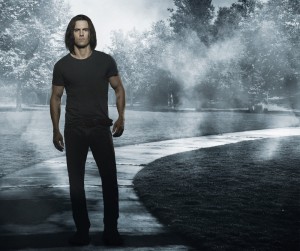 In ABC’s THE WHISPERS, Monday nights at 10 PM, someone or something called Drill is making friends with young children and talking them into playing “games” that are murderous.

At the same time, a mysterious, amnesiac John Doe, played by Milo Ventimiglia, is admitted to a hospital with no idea of who he is, where he’s been or why there are tattoos all over his body. We have a pretty good notion that he’s really Sean Bennigan, a military pilot whose plane crashed in Africa and whose wife Claire (Lily Rabe) is looking into the incidents of the children who interact with Drill. Meanwhile, the Bennigans’ young son Henry, played by Kyle Harrison Breitkopf, has begun chatting with Drill himself.

Ventimiglia has previously starred in a number of films and series, including HEROES, ROCKY BALBOA, MOB CITY, TELL and the Crackle Web series CHOSEN, which he also executive-produces. The actor, originally from Anaheim, California, takes some time to reveal a few things concerning his enigmatic WHISPERS character.

ASSIGNMENT X: Does John Doe/Sean Bennigan react to things that the audience does not see and hear, the way the kids in the story react to Drill?

MILO VENTIMIGLIA: John Doe is a mystery in the beginning. There is an internal fire that is pushing him and driving him, and a motor that is setting him in a motion, be it one that he wants to be on or doesn’t know that he’s on, it’s his journey to figure out. But there is something not necessarily of his own will that is moving him in a direction to act the way he’s acting.

AX: Without getting too spoilery, do you get into playing the experience of being a father?

VENTIMIGLIA: I’ll just say in the thirteen episodes of working and hanging out with Kyle, first of all, what a professional and a talent and just a kind, kind soul. I think we were just lucky with all those kids – all those kids were so special and we were so blessed to have them and given the opportunity to perform with them, and they definitely showed us moments of living that I think you don’t quite get all the time from your adult costars.

AX: Is it fun or challenging or something new to play this kind of a character?

VENTIMIGLIA: It’s always a challenge. Every role that I do is a challenge to me and I try and make it challenging. But to step in the shoes of John Doe/Sean Bennigan, I kind of create this guy who doesn’t know who he is or possibly learns who he is or learns information about himself when he’s only told that he has an experience. It was terribly confusing, but that confusion lets you latch onto that frustration that he’s going through and helped me shape the character.

AX: How is it dealing with all of the tattoos? Are they prosthetics or just paint?

VENTIMIGLIA: The tattoos are fancy, expensive temporary tattoos. You know how they put those on, wet the back, peel it off. There’s a little more of a process to it. We had a great makeup artist on the pilot; into the series, [it is] a gal named Natalie Cosco, and we had a very talented team building these and conceiving them and making sure that they all had meaning. Like when I did the pilot, Soo [Hugh], our creator [who based the series on Ray Bradbury’s short story THE ZERO HOUR], actually built a bible, a journey, a road map of why John Doe has all these tattoos, where they come from, what they mean. So it wasn’t just looking down at any spot on my body and seeing something random – it all means something.

AX: And are you still one of the executive producers on the Crackle Web series CHOSEN, which is going into its fourth season?

VENTIMIGLIA: Yeah. Actually, it’s funny. I saw Chad [Michael Murray, who plays Jacob Orr in CHOSEN] for the first time looking cleaned up in a nice 1940s haircut [which Murray has for his role on AGENT CARTER], and I told him to get ready, because the fourth-season outline for CHOSEN is pretty incredible, and the world gets much more connected in a global sense. So I’m very excited. We’re sorting out details, but there will be a fourth season of CHOSEN. And it’s big and I think there are a lot of unexpected surprises. You can’t count on anybody being dead.

AX: Even your character?

VENTIMIGLIA: Even Ian Mitchell. Where Ian left off, he and his wife Laura have been shot, both presumed dead, by Chad Murray’s character.

AX: What are the challenges of making a new season of CHOSEN?

AX: And what would you most like people to know about WHISPERS going forward?

VENTIMIGLIA: Just stick with us and get ready for a ride.

This interview was conducted at ABC’s party for the Television Critics Association at the Langham-Huntington Hotel in Pasadena, California.