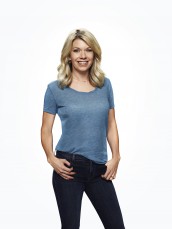 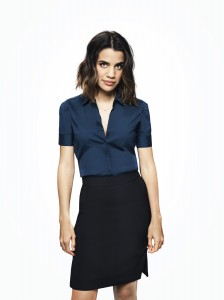 In Fox Network’s new half-hour comedy THE GRINDER, Tuesdays at 8:30 PM, Rob Lowe stars as Dean Sanderson, a successful actor who’s just spent nine years playing a maverick lawyer on a TV drama. Dean decides to go home to the small town where he grew up – and then decides he’s played a lawyer for so long that he’s qualified to practice in the courtroom. This horrifies Dean’s brother Stewart (Fred Savage), an actual lawyer who loves his sibling but resents being overshadowed by Dean’s celebrity and legal grandstanding.

Mary Elizabeth Ellis plays Stewart’s loyal wife Debbie, who keeps him more or less sane, and Natalie Morales plays Claire, an attorney who strikes sparks of both conflict and romance with Dean.

Morales starred in the cult favorite fantasy series THE MIDDLEMAN. She’s also been a regular and/or had arcs on WHITE COLLAR, the 90210 reboot, TROPHY WIFE, GIRLS and PARKS AND RECREATION. Ellis is known for her work in PERFECT COUPLES, GEORGIA, NEW GIRL and IT’S ALWAYS SUNNY IN PHILADELPHIA.

In a conversation with Ellis and Morales, it turns out that the two women have known each other off-screen for years.

NATALIE MORALES: I knew Mary Elizabeth because I’d worked with [Ellis’ husband, actor] Charlie Day briefly, so I was friends with her a little bit.

MARY ELIZABETH ELLIS: Yes. GOING THE DISTANCE is how we first met.

MORALES: We [Ellis and Morales] didn’t work together on that.

ELLIS: Yeah, but Charlie did.

MORALES: I did BOLDLY GOING NOWHERE with Charlie first and that’s how we met.

AX: Do the two of you have scenes together in THE GRINDER?

ELLIS: We haven’t yet, but I hope we do.

AX: Claire gets to be something of a wise-cracker.  Debbi is the sort of the difficult straight-person-to-the-straight-person role.

ELLIS: Yeah, I when I met with [GRINDER creators/exec producers] Jarrad ]Paul] and Andy [Mogel], I said, “I’m not going to play a wife on TV that’s just always going, ‘Guys …,’ rolling my eyes and looking up.” They promised me that this is not what this part is going to be. And even though I think every scene of mine is in the bedroom [laughs] or in the background of the courtroom in the pilot, it’s the pilot, so I’m looking forward to seeing what they come up with.

AX: Were you familiar with Rob Lowe from his earlier work?

MORALES: My Rob Lowe first impression was THE WEST WING.

AX: Do you have any sort of cognitive dissonance of, “There’s the Rob Lowe I saw on THE WEST WING …”?

MORALES: Totally. I totally know what you’re saying, and yes, I did, but Rob is such a nice guy and so personable, and just from knowing him from PARKS AND REC, I got to work with him a little bit on PARKS AND REC and we just hit it off there, and working here is a breeze. So yes, there’s a part of my brain that goes, “That’s Rob Lowe, and I’m supposed to be his love interest?” And there’s the other part of me that’s like, “Oh, this is really easy and we really click.” And it works really well.

AX: The audience has an awareness that they’ve seen Rob Lowe and Fred Savage before – in Rob Lowe’s case, playing a lot of lawyers. Do you ever feel like there are degrees of meta at play in THE GRINDER?

ELLIS: I feel like the show does a good job of not going too far of making a reference to THE WONDER YEARS and then looking into the camera, which I’m so over television doing. So I’m excited to see how it ends up playing out. I don’t know how many times we’ll see an episode of [the show-within-the-show] THE GRINDER during the show, but I just listened to Rob’s audio book STORIES I TELL ALL MY FRIENDS – it’s so good.

AX: Did you have to learn any legal jargon to play a lawyer, so that you can rattle it off easily?

MORALES: I would say that, working on THE MIDDLEMAN, having that be my first big job, was good training for big words, said in a very quick manner. [MIDDLEMAN creator] Javier Grillo-Marxuach prepared me for life with THE MIDDLEMAN. I’m very good at the quick big words now because of him.

No, I have not done any legal training, although I did want to be a lawyer when I grew up. So I switched that to acting when I figured out I would have to go to a lot less school. But yeah, we’ll see what happens on this season [laughs].

AX: Speaking of THE MIDDLEMAN, there are reports of a table-read of a MIDDLEMAN script not that long ago …

MORALES: We had a table-read for the [most recent MIDDLEMAN] comic book, another graphic novel, that we all read. It was crowd-funded, and we had the whole band back together, and Matt Keeslar, who I think he lives in Seattle. It was great. We invited a bunch of people who helped crowd-fund it and we read it in front of an audience. It was fun.

AX: You’ve done both hour format and half-hour format. Do you have a preference for one over the other?

MORALES: Yeah. Hour-longs are longer hours. But it depends on what you’re working on. MIDDLEMAN was an hour and it was fun [as] hell, so it just depends on the project.

AX: Is there any character you’ve played who’s comparable to Claire in THE GRINDER?

MORALES: A smart-ass who gives somebody sh**? [laughs] That’s pretty much every character – I’m kind of typecast that way. No, I guess not.

AX: What would you most like people to know about THE GRINDER?

MORALES: There is a gay hookup app called Grindr, but this is not the same [laughs]. I think that’s a good, very important thing to know. GRINDER is funny. You’re going to laugh.

This interview was conducted during Fox Network’s portion of the Television Critics Association summer press tour at the Beverly Hilton Hotel.