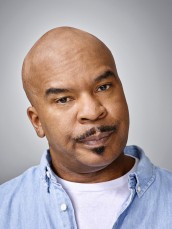 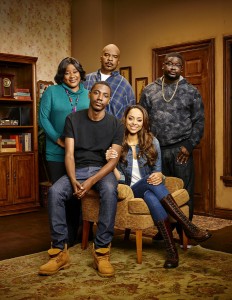 David Alan Grier has had a wide-ranging career. The Detroit-born performer has done standup, Broadway (where he won three Tony nominations), lots of feature films, both comedy (including I’M GONNA GIT YOU SUCKA and PEEPLES) and drama (including A SOLDIER’S STORY and THE WOODSMAN), and huge amounts of television, including IN LIVING COLOR. NBC recently announced that Grier will play the Cowardly Lion in the network’s musical THE WIZ LIVE!

Following a Q&A session for the series during NBC’s spring press event, Grier talked about both THE CARMICHAEL SHOW and his life overall.

ASSIGNMENT X: When your career started, did you think, “Someday, I shall play the dad on a half-hour comedy”?

DAVID ALAN GRIER: No. I met Loretta in 1982. I’d done THE FIRST, which was my first professional job [on Broadway]. I auditioned for DREAMGIRLS to take over for [the role of] James “Thunder” Early. That’s where we met. So actually, when I went to the audition for this, I saw Loretta coming out, and then I got really excited. I was like, “Oh, great!” Because we’ve known each other so long, and you really can’t fake that familiarity. We’ve been friends, I love working with her as a performer, and we just are comfortable with each other. So once I saw her, I was like, “Yes!” So we talked briefly before I went in, but I didn’t know who got it yet. Listen, I’m fifty-eight years old, and I’m ready – I’m ready for the old-guy roles.

AX: Were you in AMAZON WOMEN ON THE MOON singing “Tie a Yellow Ribbon”?

GRIER: I was. O.J. Simpson auditioned for that part. When I came into Paramount, he was there. I was like, “Good luck. I know he’ll get it.”

AX: Your character Joe is a little older than you are. Did you do any research for that?

GRIER: It’s experiential. I mean, I know those guys, I talk to them, and there was a great character study – my driver who drove me around when I was on the road was probably in his mid-sixties. This was a classic old-guy thing. He said, “Sir, do you mind if my girlfriend rides in the car with me when I pick you up tonight?” And I said, “Not at all.” So she was like mid-sixties, he was mid-sixties, and they had a tape recorder playing Earth, Wind & Fire. So they were grooving out to that. But not the stereo on the car – on a tape recorder. That’s how they had it, which is so old school, old people. And I wanted to crack up so hard. And she was like, when we started talking, she’d go, plink, stop the tape. So that’s very old guy.

AX: Jerrod Carmichael has said he wants to do a certain type of humor on THE CARMICHAEL SHOW.  Can you elaborate on that?

GRIER: There’s a fear about going home – especially bringing a friend or a loved one, your new girlfriend, home to see your family, because your family knows you. They know all the soft spots, and they take great joy, depending on the level of sanity of your family, in pushing all those buttons, especially performing for whoever is in the vicinity. And that’s very much my character. So he’s going to go, and he loves bringing up all that – the bad nickname, the time you pooped your pants, you went to school with two different sneakers on – all of that stuff that families revel in embarrassing you.

GRIER: I think that it’s the familial conversation. I remember when I called my dad, I was like, “Dad …” I was all in tears when Barack Obama first was [elected President] – I was like, “Oh, my God, can you believe it?” My father didn’t say anything. I was like, “Dad?” He goes, “I wish he’d tell all these white people to kiss his ass.” And I go, “Okay, he wouldn’t be President [if he said that].” But that’s a family conversation. Like, “Are you nuts? You should be more excited than me.” But it’s that thing of, “You don’t know. I know this [other] guy’s a jerk. [President Obama] should go in there, tell everybody eff off.” “The President can’t do that, Dad.” That, I think, in a nutshell, establishes a lot of our [father and son within the series] relationship, that pushing that button and also enjoying – because my son is more grown now, I can talk to him as a grownup and push those buttons that I couldn’t. I have a seven-year-old daughter [in real life], so I can’t really go in like I want to, because she’s a little kid, but Jerrod, I can.

AX: There’s a scene in the show where Jerrod sounds like he’s contemplating voting Republican …

GRIER: I know that one time I said, “Mom,” to my mother, who’s ninety-three, I said, “Mom, you know, I was listening to George …” I couldn’t even get “Bush” out – when he was in office. She dropped her plate and said, “Are you voting Republican?” in a voice like she was having a seizure. That is the relationship we have. For [Jerrod’s character] to even broach – and I am in no way a Republican – but to even utter the name that should not be uttered –

GRIER: Exactly. That is like, “Are you saying that you would even entertain this dogma?” And that’s where we’re at. But also my mom – when President Obama was first running, I was talking to her about Obama and she was very Hillary. Because, “He’s young, untested …”

And she goes, “I don’t know, I haven’t read a lot. I really think Hillary – she’s established, the Clintons,” she raised money for the Clintons, and then two weeks later, she was like, “I’m voting for this Barack Obama.” [laughs] “I’m really convinced.” I was like, “Okay.” Yeah. It’s just that, the generational shift, very slow to go, “What is this new thing?” I don’t know if that answers your question.

AX: You’ve said you blog when you’re not acting …

GRIER: You know, I have a cooking blog, “The Chocolate Glutton.” But I’m really serious about it. I’m very into it. I love food – I have to stop eating, because I do want to live longer, but

AX: When did you get into blogging?

GRIER: When I was doing RACE on Broadway, I just had to. I started cooking, I’m such a nerd about it, and I discovered, it’s there. It’s what we’ve been talking about a lot. Everybody has a voice, so I called my Web person, and she told me where to go on WordPress so I could start blogging, and you’re just there, just getting your nerd on, so I could really go nerd. It’s not like “My Funny Chicken Wings” – it’s really the most complicated, three-day recipes for ramen. I’m in, that’s what I’m about. It’s just me in all my nerd-dom. I would love to do a [cooking] show – I would love to do some format and talk to people that are really into it. But I’m more into really talking to other food nerds.

GRIER: This is first priority. I do live dates – always looking for plays, musicals, stuff like that. But I’m really theoretically trying to stay around. My daughter’s seven. I did two shows almost back to back from 2009 to 2012, so I need to stay closer to her.

AX: And what would you most like people to know about THE CARMICHAEL SHOW?

GRIER: That it is funny. When we did the pilot – I’ve done so much, you know the level where you’re at and the level that you’re functioning at – when the crew members, the maintenance guys, pull me to the side and go, “This is funny,” that’s the best comment. Because they’re there in the corner and they watch everything. It’s like when you do a comedy club and the waitresses give you a compliment, that’s a real compliment, because they watch everybody, they’ve seen all of it.