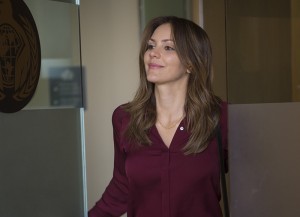 On SCORPION, now in its second season Mondays on CBS, Walter O’Brien (Elyes Gabel) and his team of unconventional geniuses continue to help the government solve baffling crimes and emergencies in an entertaining manner. The one member of Walter’s Scorpion group who is not a genius is erstwhile waitress Paige Dineen, played by Katharine McPhee. Paige is the designated go-between for the blunt, math-focused Walter and the rest of the world, though an undeniable attraction is brewing between these two opposites.

Los Angeles native McPhee first rose to fame as a first-place runner-up on Season 5 of AMERICAN IDOL. Since then, she has recorded four albums, most recently this year’s HYSTERIA. McPhee also previously was one of the stars of the NBC musical drama SMASH, which utilized her singing talents in her role as an aspiring actress breaking onto the Broadway stage scene. Prior to SMASH, McPhee took some smaller TV and film roles to hone her craft, something she discusses in this interview, which was conducted at a CBS press event.

KATHARINE McPHEE: Oh. I never saw it, so I hope I can answer your question.

AX: It was fun for what it was. Did you do that with the idea of, “Well, let me just do a movie that’s not very high-profile, so that I can learn about working on a film without a lot of scrunity”?

McPHEE: Honestly, yeah. I mean, to answer your question, you kind of nailed it on your head. I thought that I was a natural actor, but I didn’t have very much experience. So that was my instinct about myself. I’ve always been a realist, and I thought, “Okay, I’m natural at this, it feels natural to me, but I don’t have that kind of experience, and I’m getting close to getting parts, but I’m not quite getting there, I’m not quite landing that role.” I think sometimes, when you’re at a certain point in your career, and I think a lot of actors have had that – it wasn’t a money gig by any means, it was an independent film. It was the biggest independent film of that year, but still, that being said, I didn’t take it for money, I took it for experience, so that I could have that experience of being on set with the camera and the lights. I think if I were to do anything over again, I would have never gone to school, never would have gone to college. I only went for three semesters, I didn’t go very long, but I would have tried to get into the business much earlier, only because I feel like that’s where you learn the most, is by experience.

AX: Were you at school to learn performance?

McPHEE: Yeah. And you learn, but it’s not the same thing as being in a professional working environment. It’s not the same. You learn so much more [while working].

AX: Did you have to unlearn anything that you learned in school?

McPHEE: I wouldn’t have known what I was un-learning, but sure, there are things that I have to unlearn. There’s a lot of uncomfortable body language stuff. I mean, I think it’s also being young, eighteen-, nineteen-something, even twenty-something, you’re trying to learn how to get out of the uncomfortable insecurity of your body and just trying to be loose and stuff like that.

AX: On SCORPION, How are you enjoying playing the token “normal” person in the group? Do you think to yourself, “Thank you Lord, that I don’t have the weird tech dialogue”?

AX: “If the integer is at a ninety-five-degree angle …”

McPHEE: They’ve given me versions of that, very seldom. I have to say, it’s difficult. I’m not feeling pity on myself, but I’ll say, it’s almost worse sometimes when you don’t have it all the time and every once in while they give it to you, because it makes you very nervous. Elyes, for instance, is constantly having to spew out that kind of dialogue, [so he’s] almost become a pro at it, so that it doesn’t faze you, whereas they give it to me every once in awhile, and I’m like, “Aggh! Aggh!” The pressure feels so much bigger.

AX: In addition to being Team Scorpion’s liaison with the outer world, Paige is also the mother of a young genius son, played by Riley B. Smith. How is it playing a mom?

McPHEE: I like it. I’m not a mom, I’ve never been a mother, but I’ve always been really good with kids, and I’m around a lot of moms, and I hear about a lot of talk about what you’re supposed to do and what you’re not supposed to do. I honestly feel like, when the time is right, when I have a kid, I won’t read obsessively every book on how to raise a child, because I feel like I’m a natural mother. I don’t mean that egotistically, I just feel like that. I feel like I’ll learn as I go. But I’ve kind of felt like a natural mother, so it feels natural to play a mother on TV.

AX: Do you like the softer moments on the show?

AX: Paige is often involved in the action in a lot of episodes …

AX: Do you having a good time with the on-camera action?

McPHEE: Yeah, I like the action stuff. I like anything that moves that has rhythm and pace and that kind of thing.

AX: It’s too early to ask about Season 2, but do you have any favorite episodes, scenes, moments of Season 1 of SCORPION?

McPHEE: Yeah, I do. I really loved the episode where I got to pull my son out of the incinerator, and the moment I pulled him out, I said, “What the hell were you thinking?” And the stuff with Walter. The thing that’s hard with TV is that they have to cut things so quickly, so sometimes, I wish, “Oh, I wish they could have cut that not as fast,” but you still get the essence of what it was that we were doing on set as actors, creating that moment.

AX: You also have a new album out, HYSTERIA …

McPHEE: I do. After so many years, my fans have been so patient, but also relentless in encouraging me to put something out. I made a music video of my single on my hiatus. My plan is to hopefully have enough content out that, while I’m shooting [SCORPION], I can spend my weekends traveling and doing live shows and things like that. So that’s my intention.

AX: And what would you most like people to know about SCORPION going forward?

McPHEE: Oh, gosh. I think we have room to just continue to grow what people love. There are really incredible actors on our show, and I think that the people who watch it – we have a lot of viewers – I think more people will start to see that, too.