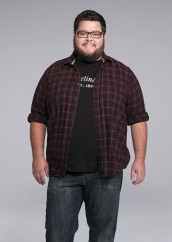 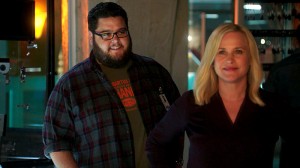 CSI: CYBER, now in its second season, is the the most recent installment in CBS’s phenomenally successful CSI franchise. Patricia Arquette stars as FBI cyber expert and psychologist Dr. Avery Ryan, who investigates Internet crime across the country and around the world, from terrorists to kidnappers who hack into baby monitors to spy on families.

Charley Koontz plays FBI Special Agent Daniel Krumitz, a young “white hat” hacker and computer analyst who is part of Avery’s team. This is Koontz’s first series regular gig; he recurred as Fat Neil on COMMUNITY and appeared in the horror film RUBBER. Earlier this year, Koontz returned to his CONTRACTED role as Zain in CONTRACTED: PHASE II, now available on DVD and VOD.

At a Q&A session hosted by CBS for CSI: CYBER and the Television Critics Association, Koontz admits that working on the series has made him somewhat wary of his own computer in real life. “I just use it less. I mean, I feel like a jilted lover with my computer. We had such a good thing going, and then I found out all this stuff that it knows how to do. So you start to scale back, and you start to be more aware of what you’re putting out, or not even putting out, the stuff that you’re having in private conversations with people. I saw Chris Hardwick on REAL TIME WITH BILL MAHER, and he said something really great – ‘Don’t email or text or anything that you wouldn’t say directly to somebody’s face.’

“But I think with the tech stuff, and the great team that we get to work with, they’ve done all the research. By the time the scripts get to us, they are so thought-out and so paced-out and so proficient that we have a whole team of people that let us know what to do. And then we can actually act. They tell us what the technical aspect of it is, and also, we get to build why it’s important to us and why it’s terrifying.

“You know, when you read code or you read about a backdoor Trojan [virus] or you read about all this kind of stuff in the script, you go, ‘Okay, that doesn’t mean a whole lot.’ But then you have people explain it to you, ‘This is why this is so incredibly terrifying, is that it looks like numbers, but it’s not just numbers. This is the number that’s getting in and sharing all of your personal stuff and putting you in danger.’ So that’s when the really great character stuff gets to come out of it, because it’s not just tech talk. It’s all the ways that it really affects almost every single aspect of your life. So my computer and I have broken up – I hope he’s dealing with it better than I am.”

Even though what they deal with is scary, Koontz adds, “The characters that we play don’t hate technology. They love technology. It’s their life. They love it so desperately. My character loves it a little more desperately than the others, but that’s a version of this world that we live in. There’s so little regulation to the Internet, which is so fantastic, which is exactly how it should be. But you also want a little bit of personal responsibility and personal awareness of it. So the show is celebrating technology, it’s amazing, and all the things we can do with it. They can be horrifying, like anything. Peanut butter is fantastic, but if you eat a giant bucket of it, it’s not going to go that great.”

The focus of CSI: CYBER allows for new kinds of plots, Koontz observes. “One thing that’s also really interesting about cybercrimes is that, a lot of times in procedurals before, it was revenge or a cheating wife or a murderer, or really visceral one to one connections in why these crimes happen and crimes of passion, things like that. One of the things that’s so horrifying about all of this [cybercrime] is that ninety percent of the time, it’s totally random. It has nothing to do with you. There’s nothing you can do. It’s somebody who wants to park outside your house and hack onto your wi-fi and steal all your stuff and really put you in a precarious situation. That’s what I found to be the most crazy about all these scripts, is that you have to solve a crime where two people aren’t linked. There’s no hilted lover and there’s no bully at school. It can be different schools in cyber-bullying. You don’t always have to know the person, which really just makes me anxious.”

Later, at a party thrown by CBS for the Television Critics Association, Koontz spends some time talking one on one about both CSI: CYBER and the CONTRACTED films.

ASSIGNMENT X: Now that you’re in Season 2 of CSI: CYBER, have you gotten any more comfortable with the tech jargon dialogue?

CHARLEY KOONTZ: Absolutely. At the beginning, it was difficult, because it is difficult. It’s a lot of big concepts that are somewhat abstract. By the end of the first season, we got really comfortable. So it was a little bit of a learning curve, but we’re doing a lot more character stuff this year as well.

AX: In Season 1, Peter MacNicol was part of your regular cast. He’s gone, but now you’ve got Ted Danson, who’s moved his D.B. Russell character from the CSI mothership to CYBER. Are you excited about working with Ted Danson, sorry to say goodbye to Peter MacNicol …?

KOONTZ: Tremendously sorry to say goodbye to Peter MacNicol. He has the biggest heart, and he has all of our hearts, just an amazing, amazing human being. Very excited, though, about Ted Danson. He’s bringing back a little bit of the original CSI in terms of the bio-forensics, [with] an experimental division called the Next Gen Cyber Division. It’s linking forensics digital and biological.

AX: And what is CONTRACTED: PHASE II?

KOONTZ: It’s a sequel to a film called CONTRACTED, directed by Eric England, from 2013, that I was in. In the original CONTRACTED, a young girl gets roofied at a party and contracts and STD that sort of ravages her body over a few days, and then she turns out to be Patient Zero of the zombie virus. So CONTRACTED: PHASE II deals with one of the people that she slept with and his continuation and it turning into more of a global virus is sort of what’s going on.

AX: If it’s sexually transmitted, do the people who get sick bite other people, or what happens there?

AX: Are there any new twists in the second film?

KOONTZ: Well, the second one is much more of an adventure story than the first. So it’s a bigger scale and it’s just what it means to watch a virus spread, I guess.

KOONTZ: I play Zain. My character is a provider of things. Whatever somebody needs, somebody gets. In the first film, [Zain is] a drug dealer who gave the roofies to the person in question who would perpetrate the act. And then I return for the second one, and to do more tomfoolery. I’m a nefarious human being who’s only out for himself.

AX: Does Zain start avoiding having sex as a result of all this?

KOONTZ: Well, not a problem Zain has to start with. He’s safe [laughs].

KOONTZ: Much more gory than the first one.

AX: And what would you most like people to know about Season 2 of CSI: CYBER?

KOONTZ: It’s a lot more about the characters and a lot more about having a job that takes eighteen hours to crack one code makes it somewhat difficult to have a family life and/or relationships that are interpersonal i any kind of way.