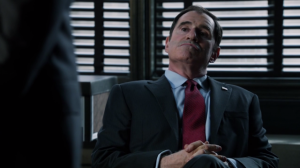 Kind, born in New Jersey, has a nonstop career in TV, film and theatre. He was a regular on SPIN CITY and can currently be seen as traumatized Mayor Aubrey James on GOTHAM and heard as Bing Bong, the imaginary pink elephant/cat friend of a little girl in the animated hit INSIDE OUT.

ASSIGNMENT X: Is there any similarity between actually being a father in real life and the father you play in RED OAKS?

RICHARD KIND: There are times when I recall how I talk to my son, when I talk to Craig [as] David, when I think of [Kind’s real-life children] Max or Sky or Sammy, but I also see my dad. I’m very similar to my dad in this role. I see things that, when I do them, and I see my mannerisms or what I’ve chosen to do, or how I’ve said it, that’s what I see. But yes, having children of course helps.

AX: When you were working in the Eighties, because your RED OAKS cast mates Jennifer Grey and Paul Reiser were visible even then, did you have any thoughts of, “Gee, I’d like to work with them,” and what working with them might be like?

KIND: Let me tell you something. I worked with Jennifer Grey before, because we were waiters at the same restaurant in the early Eighties. That was before she achieved fame. So yes, I did know that I would work with Jennifer Grey, because I did. I never thought that she would be playing my wife, and she makes me very handsome. Because if somebody who looks like Jennifer Grey marries me, then I’m better-looking. Paul Reiser, no, never thought I’d work with him. [laughs] I’m kidding.

AX: When you first read the INSIDE OUT script and saw the character Bing Bong, what was your initial reaction?

KIND: Boy. First of all, you always put your trust in Pixar. They know more than we do. The more that we did it, I kept worrying, “Will people understand the story that you’re trying to tell? This is weird, this is memory orbs and it’s stuff that is not high concept. It’s weird concept.” And then I saw what we see in the first six minutes. They introduce the whole world. That’s pretty amazing. It’s like playing Monopoly and you learn the rules in three minutes. It’s a whole different thing. And so when I saw that, I went, “Oh, my God, they are going to get it.” Because I got it. But I got to read the script. I got to know. They were explaining it to me as we were doing it. They would go, “Okay, they’re going up to the brain, there are these memories …” I’m understanding it because they’re explaining it to me. That you can do it in three, four, five minutes before the credits, that’s astounding to me.

KIND: I wish I did, but I did not. My daughter claims to have had one, and I sort of remember that, but it wasn’t so strong.

AX: Do children who see the movie recognize you when they hear your voice, which is very distinct?

KIND: Oh, I’ve seen kids and I go – it was late at night, and the mother was walking her two kids, and I heard them talking about Bing Bong. I overheard them. And I stopped them. I would never do this, but I stopped them. And I go, “Did you like INSIDE OUT? And did you like Bing Bong?” And they go, “Yeah.” And I go, “I’m Bing Bong.” Well, one of the kids couldn’t compute it. And the other kid was old enough to know, but couldn’t believe it. And then the phones came out and they took pictures, but they don’t know. They have no idea. They’re not going to go, “Wait, he was on SPIN CITY.”

AX: Seriously, won’t they know you’re Bing Bong when they see the extra features on the DVDs and Blu-rays?

AX: Well, maybe children who are going to grow up to become critics?

KIND: Listen, when those children become TV executives, that’s when I want them to know who I am [laughs]. If they grow up and be that.

AX: Do you hear from a lot of adults that Bing Bong made them cry?

KIND: When I was a kid, [when the telefilm BRIAN’S SONG aired], you remember going to high school and everybody going, “I cried. I swear, I cried. It made me cry. The football player – it made me cry.” I get those messages – “It made me cry.” But who knew? I always say, I’m riding the coattails of a genius. [INSIDE OUT director/co-writer] Pete Docter, I’m very lucky to be associated with him.

AX: Do you know if you’re doing more episodes of GOTHAM?

KIND: I did like eight of the first ten and then all of a sudden it stopped. And now this year, they’re calling me back, they want me, and they go in so many different directions.

AX: Does the schedule on that as a recurring cast member give you time to do theatre?

KIND: Well, the theatre that I go do in the summer I couldn’t do because of RED OAKS, because we shot in the summer. With GOTHAM, I’m a character actor. And you give me different parts to play. So here I am a father, there I am an imaginary friend, there I am the mayor of Gotham City. What do they have in common? Nothing. And I have to pull out of my ass, “What will it be that will make me different for each part?” And that’s a challenge. It’s a good role on a great show. I’m so proud to do it. I’d probably be more famous if I thought in those terms – “How can I elevate my fame?” But I don’t. If they offer me a great role, I’m going to do a great role, or they’ll offer me a role and [I’ll] try and make it great, let’s put it that way.

AX: Do you enjoy being a character actor?

KIND: I’m a lucky guy, in that they don’t hire me because I’ve got a pretty face. You’ve got smarter people making better products, and then they’ll hire me. I’m sort of one of those guys who’s under the radar. You walk down the street, I live in New York, [people think] do they know me, do I owe them money, did I go to college with them, high school, am I related to him? So it’s always been sort of like that. I’m ridiculously proud of what I’ve been able to do, and that includes things like plays, which I have been able to do. That’s where my love is, and only three hundred people, or nine hundred people, see that a night, but I was in a Tony-nominated play [DIRTY ROTTEN SCOUNDRELS], I was nominated for a Tony [for Featured Performer in the 2013 production of THE BIG KNIFE] – these are things I’ve been able to do. So it’s been great. I’ve been a very lucky man with my career.

AX: What would you most like people to know about RED OAKS?