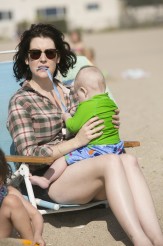 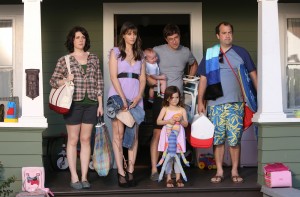 The cast of the HBO series TOGETHERNESS | © 2015 Jaimie Trueblood/HBO

In HBO’s new half-hour TOGETHERNESS, Sundays at 9:30 PM, Melanie Lynskey plays Michelle Pierson. Michelle is a mother of two who starts to examine her marriage when her sister (Amanda Peet) and her husband’s best friend (Steve Zissis) move in with the family. The naturalistic tone of TOGETHERNESS, created by independent feature filmmakers/brothers Jay Duplass and Mark Duplass (who plays Michelle’s husband Brett) is distinctly different from the raucous high style of CBS’ TWO AND A HALF MEN, which Lynskey has recurred on for over a decade as Rose, devoted stalker and possibly murderer of Charlie Sheen’s character Charlie.

Lynskey, a native New Zealander who does a flawless American accent, began her screen career at age sixteen, starring alongside Kate Winslet in Peter Jackson’s drama HEAVENLY CREATURES. Some other credits include EVER AFTER: A CINDERELLA STORY, COYOTE UGLY, FLAGS OF OUR FATHERS, UP IN THE AIR, a multitude of independent features and television roles.

Lynskey talks with a small group of reporters about TOGETHERNESS, as well as TWO AND A HALF MEN, which has its one-hour series finale Thursday, February 19.

AX: How do you imagine Michelle and Brett met and fell in love and got married?

MELANIE LYNSKEY: Oh, gosh, we talked about that. I think they met in college. Michelle went off and had some adventures for a time and then she came back, they got married. I think they got together pretty early. A lot of changes happen in your twenties. You sort of become a different person and it can be hard to in your thirties stay in the same relationship you were in when you were in your early twenties.

LYNSKEY: Well, it’s interesting. I feel like I do so many little independent films that ten or fifteen people see [laughs], so I do tend to play a lot of people who are just struggling with real-life circumstances. I’ve done a lot of movies recently that were improvised and things like that. So it doesn’t feel super-unfamiliar to me, but there is something about playing a person who has kids, who has a life, who’s very, very settled in her life, but is still sort of looking outside that is interesting. It’s different from TWO AND A HALF MEN.

AX: Is it a challenge to make interesting somebody who’s struggling with trying to be interested in her own life?

LYNSKEY: I don’t know. That’s something that I find very interesting. I find people’s inner worlds fascinating, people struggling with complex and everyday life. We were just talking about that show in New York, SLEEP NO MORE, and there’s all this action that you follow and you go around and all this dramatic stuff is happening, and I just watched this bellhop for an hour, because there’s just an actor who’s behind a counter, just waiting for someone to check into this hotel. This actor was fascinating. I couldn’t stop watching him. My boyfriend saw orgies and murders and all sorts of stuff, and he was like, “You missed out.” And I said, “But I saw this actor just doing this human thing for an hour, and that’s the thing that makes my heart sing.” So I hope it’s interesting for other people to watch. It’s interesting for me to play.

AX: The Duplass brothers said they saw this as a challenge to improve how they write for women, their female characters. How’d they do?

LYNSKEY: Amazing. It’s funny – they’re very self-deprecating about their writing talent. The character was so fully formed. We’re always allowed to bring our own stuff to it. There are some moments where I’m like, “This is what I want to be,” and my boyfriend was like, “Was that improvised or is that in the script?” [laughs] They’re really good at letting us come up with stuff, but it’s all there. It’s not like we’re working to create something.

AX: Do you get into a different mindset for something like TWO AND A HALF MEN than you do for TOGETHERNESS?

LYNSKEY: Well, the thing is, I’ve done like one or two episodes [a year] of TWO AND A HALF MEN for the last nine years or whatever, and most of the rest of my career is smaller movies and stuff that walks that sort of dramatic/funny line, or it’s just dramatic. So for me, the outlet of doing that sitcom thing with an audience, that’s the thing that I have to get into the mindset for. This is more comfortable for me. For me, the thing of going back to the live audience, where everyone knows the character, is such a different thing, it’s so transformative and it’s so weird and out of body. It’s super-exciting, but that for me is the thing where I’m like, “Okay, back on the sitcom.” It’s a heightened performance that I’m not used to doing.

It’s such a weird thing, where I’ve been sort of dipping into it on and off for twelve years. I’ll do a couple of episodes, so it hasn’t been my life like it has been for the other guys, like I haven’t had to show up to work and be living it. It’s just always been this of, like, now and again there. It [will be] really very strange when it’s not there any more.

My best friend, Emily Deschanel, is on BONES. Every day, she shows up on set and works super-hard. I feel like when a show like that comes to an end, people are so exhausted that they just are like, “Oh, my God, now I get my life back” [laughs]. But for me, doing one or two episodes – it’s going to be strange. 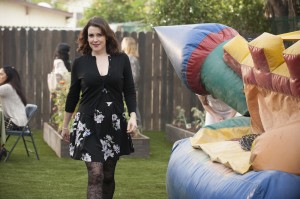 AX: TWO AND A HALF MEN is ending. Are you coming back for any more episodes?

LYNSKEY: Yeah. I think I’m in the finale, but I have no information on that.

AX: Do you have a single episode or scene from your work on that series over the years?

LYNSKEY: Gosh, there are so many. I mean, I had so many lovely times with Charlie, honestly. We had such a great chemistry. We had so much fun together. And there was this one moment that was a joke in the show, where he thinks he’s dying and he goes to propose to me and then the joke is, his doctor calls and says, “Good news, the test results are back and you’re fine!” And he stands up and he doesn’t propose. But the moment where he got on his knee, we were in front of the audience, there was this gasp from the studio audience that was so emotional that we both started crying. We were looking at each other and he had this ring and tears were running down our faces. We just weren’t expecting the investment [from the audience]. And we had to reshoot it, because it wasn’t funny at all. We just sat there afterwards and talked to each other and we were like, “People really care about this relationship.” And I’ve never been a part of [something] where it felt so magical, to hear that gasp. That’s my favorite moment.

LYNSKEY: This [TOGETHERNESS] is a lot easier for me. There’s an honesty to it. TWO AND A HALF MEN – the timing’s so specific, Chuck [Lorre, co-creator/executive producer] is so specific about what he wants the timing to be and it’s like a different set of techniques.

AX: So does TOGETHERNESS feel more collaborative for you?

LYNSKEY: It does. TWO AND A HALF MEN is a lot of fun, but it’s very much like one person’s vision. [The Duplass brothers are] collaborators as it is, and then they really love including people. But this is a real collaboration.

This interview was conducted at HBO’s portion of the Television Critics Association press tour.