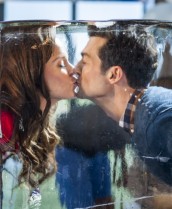 The actor talks his new Hallmark Channel film, plus the word "doppelganger" 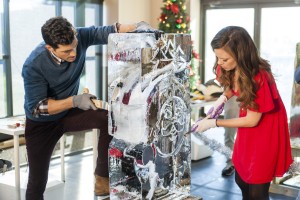 In Hallmark Channel’s new telefilm ICE SCULPTURE CHRISTMAS, which has its next airing Saturday, November 14 at noon, David Alpay stars as David Manning. David finds true love where he least expects it when he comes to the aid of his childhood friend Callie, played by Rachel Boston.

Toronto native Alpay has had series regular roles on SLINGS AND ARROWS, THE BORGIAS and THE LOTTERY. He is also proud of another TV credit.

DAVID ALPAY: I was on Season 4 of THE VAMPIRE DIARIES. I played Professor Shane.

AX: Your character was scheming with Silas, who was the doppelganger of Paul Wesley’s main character Stefan …

ALPAY: Do you remember when “doppelganger” was a word you only used in English Lit? I never used it outside of university until I was on VAMPIRE DIARIES.

AX: What happens with your character in ICE SCULPTURE CHRISTMAS?

ALPAY: I play a debonair playboy who falls in love with this adorable girl who’s a brilliant chef. She’s got an awful job washing dishes at a fancy, hundred-buck [restaurant]. And I, unbeknownst to her, enter her into an ice-sculpting contest, and then I’ve got to help her with the ice sculpting. It’s kind of cute. It’s a romantic comedy.

AX: Did you learn how to make ice sculptures for the movie?

ALPAY: I did! We had this great teacher and he taught us how to carve ice within a day. Our first scene is where we make the ice-sculpting contest scenes.

AX: So do you now offer to make ice sculptures for all your friends?

AX: Your ICE SCULPTURE leading lady Rachel Boston was one of the leads in WITCHES OF EAST END, so you both have genre backgrounds. Have you done any other genre projects since VAMPIRE DIARIES?

ALPAY: No, although I just filmed a phenomenal, very dark – it’s a noir, actually, so it should be dark – film for Peter Lynch called BIRDLAND. It’s a psychosexual drama, so it’s very much not what you would expect to see on Hallmark. And you won’t see it on Hallmark [laughs]. It’s an indie film.

ALPAY: Somebody asked me that recently. I don’t know. Bad guys have a lot of fun, but good guys win, too, sometimes. Good guys do get the girl. Rachel’s awesome.

AX: How is it working with Hallmark?

AX: What would you most like people to know about ICE SCULPTURE CHRISTMAS?

This interview was conducted at Hallmark Channel’s party for the Television Critics Association summer press tour.