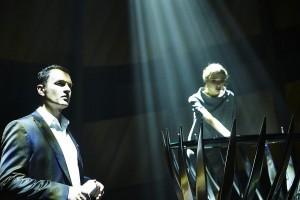 Arthur C. Clarke’s 1953 novel CHILDHOOD’S END has been regarded as a science-fiction classic for six decades now. For about the same amount of time, it has been regarded as unfilmable, even though Stanley Kubrick’s cinematic adaptation of another of Clarke’s novels, 2001: A SPACE ODYSSEY, has received near-universal acclaim and despite the fact that CHILDHOOD’S themes of an alien race arriving on Earth with tangible benefits (an end to war, disease and poverty) but dubious motives have been disseminated throughout countless other books, films and TV series.

Syfy Channel has finally accepted the challenge and produced a three-part miniseries of CHILDHOOD’S END, concluding tonight. The production is directed by Nick Curran and scripted by Matthew Graham, who is also one of CHILDHOOD’S executive producers.

Graham co-created the British science-fiction series LIFE ON MARS and its spinoff ASHES TO ASHES; he’s also written some episodes of the new DOCTOR WHO (as well as a great deal of non-genre fare).

ASSIGNMENT X: Do you think one reason it’s taken so long for CHILDHOOD’S END to reach the screen is because people are afraid of adapting Arthur C. Clarke due to potential comparisons to the film of his 2001?

MATTHEW GRAHAM: Yeah, they’re daunted for two reasons. They’re daunted because 2001 is such a classic, and they’re daunted because 2001 is so potentially alienating to an audience. I mean, it’s anathema – famously, an M-G-M executive had a heart attack watching the first cut of 2001. There was something about it that was like defying you to enjoy it. Of course, I don’t [feel that way about 2001]. I adore it. But that’s not necessarily how execs think when they’re making movies or making shows. With this, we had to embrace the aspects of the story that are uncompromising, we had to not flinch and say, “No, we’re going to do it, we’re going to go to that place.” This is not a cheap-thrills show. It’s a proper literary adaptation.

AX: Was there an issue in adapting dialogue from the book, which was written back in the Fifties?

GRAHAM: There’s a lot of dialogue from the book in the show, but obviously, there’s a lot that’s changed. In actual fact, there isn’t a lot of dialogue in the book. The structure of the book is such that it lends itself more to describing the stages of the journey through the changing of the Earth. So obviously, I’ve had to modernize the dialogue and extrapolate things from it. But I’m absolutely determined to constantly [have] touchstones from the book in the show. You will hear lines – “There’s no need to be afraid” is a Karellen [the aliens’ primary representative on Earth] line that you hear again and again in the show that’s in the book. All the key sequences from the book are in the show.

AX: Karellen is played in the miniseries by Charles Dance. The way Karellen looks is a major plot point in the book. Without spoiling that, was his appearance a major design issue?

GRAHAM: Yes, absolutely. We had a brilliant designer called Philip Ivey, who designed DISTRICT 9 and ELYSIUM, and he is an amazing designer. We embraced what Karellen has to look like and we went for it and I guess we just assumed that it would be so shocking when you saw him that you were going to think he’s incredibly intimidating.

AX: Well, the way he was described in the book, you can see how that could go wrong onscreen …

GRAHAM: Oh, yeah, definitely. But I also think if you try and change it, if you try and apologize for [Karellen’s appearance] – can you imagine the conversations they had about Two-Face in BATMAN? Do you really give him half a face? Isn’t that a bit silly? Do people really walk around with half a face? Well, you know what? If you didn’t do it, people would be short-changed. So we have to give people Karellen in the book. If we didn’t do that, we would be nailed, rightly, to the wall for it.

AX: Were there any discussions about diverging from the book?

GRAHAM: No. I was like, “He’s got to be how he is in the book, because that’s what Clarke wanted and that’s why he’s hidden his face from us, he knows how provocative his appearance is.” We make jokes in the story about it – the characters make jokey references to it as well. But we don’t give him sunglasses. I think there was a piece in the book where he wears sunglasses at one point, and that would have looked very strange.

AX: CHILDHOOD’S END deals largely in ideas. Was there any request from Syfy to make it more action-oriented?

GRAHAM: No, they’re happy to have the philosophy. There are places I think in the story where we’ve put in a little bit more – I wouldn’t call it “action,” but a little bit more tension. I mean, you can’t have four-and-a-half hours just of philosophical debate. As much as it seems appealing, it probably in modern network television would seem a little bit languid. But we do have those moments – we have scenes between Karellen and Ricky where it’s just an alien and a human being talking and discussing.

AX: CHILDHOOD’S END also deals with the large-scale dissolution of religion. Was Syfy concerned about how that might play in various parts of the world?

GRAHAM: I didn’t have any serious conversation with them about that, no. I mean, it’s a part of the story that you have to embrace. I don’t think we’ve been overly provocative and we certainly haven’t said, “God is dead,” we have just said, “If you have a faith, okay, you have a faith.” Karellen himself says, “Faith is beautiful the way poetry is beautiful” – that’s the line I think he has – “Faith is beautiful like poetry is beautiful, but there comes a point where you have to put it aside.” It’s provocative and it’s thought-provoking, but we haven’t deliberately tried to upset anybody.

AX: Well, it’s sort of hard to disprove faith, because if you have faith, the aliens would seem to be just another kind of a trial.

AX: With the miniseries, you essentially wrote three movies, back to back. How long was that process, how long was filming, and where did you shoot?

GRAHAM: Initially, the process was quite quick. I mean, I had a long time to write the first episode, and then when Syfy read it and got excited about it, I had to work on the other two very fast in order to get the machine oiled and get it going. Once we got going, then I could revisit and rewrite and rewrite, and we had a lot of discussion time. Nights 1 and 3 came together very quickly; Night 2, being the one most removed from the book, had more areas to discuss and open to interpretation. The middle act of any story is the toughest part of the story to get right, so I think that was probably the biggest hurdle, months and months.

And into filming we were changing things, because we were discussing it. We were always discussing the issues, the actors were, we were all getting together, and sometimes I would sit with Charles Dance and he’d say, “I found this little passage in the book, Matthew, which we haven’t used. What do you think?” And we’d have a chat about it, and sometimes we’d use it, and sometimes we wouldn’t. So there was always refinement. And we started pre-production in August last year, we started shooting beginning of September, finished end of March in Australia. We were based in Melbourne.

GRAHAM: Well, there were financial reasons, but also, it’s a fantastic place for crews, and we found new locations. We found things that got us away from the tried and tested locations that are used a lot from this town [Hollywood] and we were in different landscapes. We rebuilt Ricky’s farm in Missouri out in the Outback. We built the farm – we grew our own corn, our own maize. We actually had our own cornfields.

AX: To ask a perhaps horribly parochial question, when you’re shooting in Australian farmland, do you have to worry about being bitten by snakes and lizards? Because in Los Angeles, Australia’s sort of famous for its amount of small, poisonous creatures.

GRAHAM: Everything can kill you in Australia. Not least the Australians. We had a snake wrangler. We had a snake and spider wrangler who would go into the fields with a big pair of tongs and carry them away, and then we’d go in and film. When you get to be a writer, it’s much better. But as a writer, you can just sit back behind the monitor and keep out of the way, and the poor actors had to – also, at night, the night shoots, we were eaten alive. We had billions, like a blizzard of mosquitoes and bugs. So poor Mike and Daisy [Betts, who plays Ellie] would be in full bee-keeper outfits. We’d all be in bee-keeper outfits, with the sheets up, and then they’d go, “Okay, cameras rolling,” they’d take off their gear, quickly do the take, put the masks back.

AX: Did you ever have to stop shooting because an actor would get chomped in the face during a take and swell up?

GRAHAM: No. They were pretty hardy. Daisy’s an Aussie girl, so she’s used to it.

AX: What do you think DOCTOR WHO fans will think of CHILDHOOD’S END?

GRAHAM: I don’t know. If they’re true science-fiction aficionados, I’m hoping they’ll be very excited about it. It doesn’t have the pace of WHO, it’s not that kind of show. It’s very, very different. It’s not sort of jolly japes and leaping about the universe. It’s much darker. I hope they’ll like it.

AX: What would you most like people to know about the miniseries CHILDHOOD’S END?

GRAHAM: That we have tried to honor the book and we’re faithful to the book, as much as we can be.