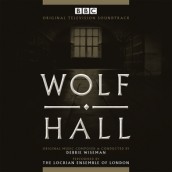 It’s understandable that the BBC (let alone America) can’t get enough of the wildest member of England’s Royal Family and his entourage, who helped the lusty Henry VIII break from the Roman Catholic Church. The chief architect in his court who enabled is wife-laden plans was Thomas Cromwell, not exactly a babe magnet himself, but serpentine in his machinations that changed the fate of Britain. Given this interior, oft-villainized figure who spawned Hilary Mantle’s novels and this six-episode adaptation, it’s understood that a big, robust orchestral score might not be the way to go, or either the kind of contemporiazed take that Trevor Morris gave to Showtime’s THE TUDORS. So it’s a particular pleasure to have Debbie Wiseman arrive in the king’s confidence for the lovely, intimate score that graces WOLF HALL.

A composer who’s proven herself in the historical arena with the robust, sympathetic scores for the likes of Oscar Wilde, and T.S. Elliot as well as such fictional icons as Sherlock Holmes and Dr. Henry Jekyll, Wiseman has always been a composer who’s equated melody with aristocracy, both in terms of creative distinction and English society. Here she’s essentially dealing with a working class schemer who made very, very good, but likely at the cost of his humanity. WOLF HALL is subsequently “unplugged” in its sparseness, yet vast in emotional tone as her mostly string quintet approach (richly performed by the Locrian Ensemble of London) creates a gripping sense of rhythmic intrigue, conveying the constant back-stabbing and ear-whispering that rises one to the top of the political game next to a figure with a fondness for decapitation.

Using a repeating, string theme that gives a Glass-ian touch to WOLF HALL, Wiseman creates a haunted, elegant sense of loneliness for a man who’s survival meant hiding in the moral shadows. Combining a period-specific sounds with the flute, harpsichord and drums, as well as such emotive instruments as the piano and chorus Wiseman creates a rich, lovely thematic tapestry in the almost poignant sound of a loner looking in and yearning for acceptance even as he helps shape the course of a country to its ruler’s whims. When so many bigger entertainments now trying to find good within iconic, seemingly villainous characters as MALEFICENT, Wiseman accomplishes the historical version with a calm, darkly melancholy whisper, much like the life-altering words that Cromwell sent into a King’s ear.

Click on the link to Purchase the WOLF HALL soundtrack