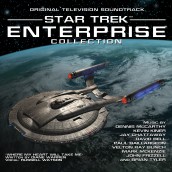 These are the far more interesting new musical voyages

Since the days the U.S.S. Enterprise set space sail on vinyl, the franchise’s TV music universe has beamed from Varese Sarabande to GNP/Crescendo and Film Score Monthly, but perhaps not so exhaustively as in the good hands of La La Land Records, who beyond their releases of STAR TREK: THE NEXT GENERATION, DEEP SAPCE NINE and VOYAGER could lay claim to releasing just about every note of Classic Trek music in an astounding box set, which offered 15 CD’s suffused with the kind of distinctive themes and melody that would essentially be phasered out when the show was reborn in multiple incarnations in the 1980s. Some offshoots would be far more successful than others, especially when it came to the ENTERPRISE prequel that aired on Paramount’s UPN network from 2001 to 2005 – a time when the scoring approach dictated by the shows’ high creative council displayed as much liking for distinctive music as Klingons had love for tribbles. Sure ENTERPRISE might have been a scrappy holodeck precursor to some, but what’s surprising is that it might just have been the spin-off to display some of the most interesting music of the bunch, as can be heard in La La’s four-disc collection of the series’ greatest hits.

ENTERPRISE set itself apart from a fairly musically amorphous pack right out of retro-spacedock by using a Diane Warren song as its main title, as opposed to an instrumental theme (the most memorable of which still belongs to Jerry Goldsmith’s re-use of his ST-TMP theme). Smartly divided by musicians and fan favorites, the first two CD’s belong to longtime TNG composers Dennis McCarthy and Jay Chattaway, the men tasked with finding what would essentially be the non-commital approach to the franchise’s sound. Thankfully, ENTERPRISE gave a bit more leeway to both, allowing them to show off more of their true thematic talents, McCarthy in particular reveals his epic abilities with the villainous Xindi’s attack on Earth for “The Expanse,” taking full advantage of the orchestra at his disposal with proud military action and suspense, Holstian thrills that get to take on Nazis in his full-throttle music for “Storm Front.” Not only does Chattaway get to play alien-ethnic flutes for “Civilization,” but also gets in some of the series’ (and this album’s) most wonderfully movie-score conventional music as he gallops away with space spaghetti western music, combining a wild electric guitar with rocking old-school orchestral stylings for the space range of “North Star.”

CD3 is dedicated to the “Veterans and New Recruits,” which starts off impressively as “First Contact” film orchestrator Mark McKenzie brings that Goldsmith touch to “Horizon,” one of the most robustly cinematic suites in the collection.ALIEN RESURRECTION‘s John Frizzell provides percolating suspense and melodic grace to “Proving Ground,” while QUANTUM LEAP‘s Velton Ray Bunch shows he’s equally adept at sending Scott Bakula into a Starfleet uniform with Federation timpani as he is a coming up with loopy theme for a game of Geskana. CD4 is given over to the “Fan Favorites,” beginning with McCarthy and Kevin Kiner’s visit to a familiarly savage alternate universe with “In A Mirror, Darkly,” which offers thunderously striking, battle-loving music for orchestra and electronics, all with having a novel, sadistic twist on Goldsmith’s peacefully climactic scoring in FIRST CONTACT.

But most impressive on this disc is a score from a certain rising composer named Brian Tyler, who was given the formidable task of taking on The Borg for “Regeneration.” Even at this early stage in a career that would be full of fantastical action scoring, Tyler’s ability play excitement with ever-rising, orchestral rhythms, a la his breakout, Goldsmith-replacement soundtrack to Paramount’s “Timeline,” is played with utter, captivating confidence here. He also captures the eerie, seemingly unstoppable menace of a robotic hive mind – something that will be on full display as he helps the Avengers take on Ultron this summer. It’s “Enterprise’s” willingness to finally let these talented composers to relatively go for it after years of musical vanilla that really makes this set worth it for fans whose alpha and omega is understandably the scoring style of Classic Trek. Tying just about five hours of music are some of the best liner notes that Trek music expert Jeff Bond has done for both movie and show scoring incarnations, his writing made all the more memorable with the surprising honesty at getting the composers to reveal how “Enterprise” was going to be a relatively new, and far more interesting ball game in guiding New Trek to its seemingly final destination, as heard from the beginning of the Federation’s voyages.

Click on the link to Purchase the STAR TREK: ENTERPRISE soundtrack