© 2015 TV One
The cast of WHITE WATER, an original film for Black History Month on TV One channel
Interviews

The seven-year-old twins discuss the TV One original film, water fountains and segregation 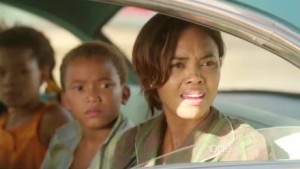 In TV One’s original telefilm WHITE WATER, premiering Saturday, February 7 at 8 PM, we’re in a small, racially segregated Alabama town in 1963. Young Michael, played by seven-year-old twins Amari and Amir O’Neil, develops an obsession with tasting the water from the “whites only” drinking fountain, imagining it must be delicious. Michael’s innocent but determined quest points up the absurdity of racism. The film, based on a true story, is directed by Rusty Cundieff (FEAR OF A BLACK HAT) from a teleplay by Michael C. Brandy and Eric Stein. WHITE WATER also stars Larenz Tate and Sharon Leal as Keith’s parents.

The O’Neil twins are making their acting debut in WHITE WATER. White waiting to participate in a Q&A panel held by TV One for the Television Critics Association, the two children, who are virtually identical and genuinely adorable, sit down for a quick talk about the movie.

AX: Did you know about this whole water fountain segregation thing before you got involved in WHITE WATER?

AMIR O’NEIL: No. We thought that “colored water” shot [out] rainbows and things, and then the white water had white water.

AMARI O’NEIL: We thought it shot [out] white water.

AX: What did you think when you heard about the separate water fountains? Were you horrified, or just thought it was silly?

AMIR: It wasn’t really scary at all.

AX: Well, not “horrified” as in a horror movie, but just like thinking, why were people doing this?

AMIR: It was a silly rule, yes.

AX: Can you talk about your character?

AMARI: Yes. He fights for what he believes in and he’s really adventurous and but he broke the law. He disobeys the law.

AX: You look a lot alike, but you have different teeth. Do they put fake teeth on one of you to make them match?

AMARI: No. They’re going to do this thing called “movie magic.”

AX: Does one of you have scenes you like doing more than the other?

AX: You both liked doing the kissing scene?

AMIR: Yes, ‘cause we had a crush on the girl we had to kiss.

AX: What’s the most important thing you think people should know about WHITE WATER?

AMIR: The most important thing people should know about this movie is, you shouldn’t have segregation.

AMARI: You shouldn’t fight because of race, you should be fighting for what you believe in.