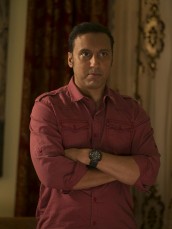 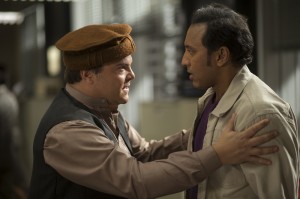 In HBO’s THE BRINK, Sundays at 10:30 PM, Aasif Mandvi plays Rafiq Massoud, driver to Alex Talbot (Jack Black), a singularly unqualified attaché to the U.S. embassy in Pakistan. Through a series of strange events, Jack and Rafiq find themselves in the position of trying to stop World War III.

Mandvi, who originally hails from India, is also a writer and co-producer on THE BRINK. He’s known for his work as a correspondent on THE DAILY SHOW and has acted in a wide variety of films and television, including the series JERICHO, SPIDER-MAN 2, THE PROPOSAL, MARGIN CALL, MILLION DOLLAR ARM and HALAL IN THE FAMILY, which he wrote with Miles Kahn.

AX: In both last year’s MILLION DOLLAR ARM and now THE BRINK, you seem to be taking the role of the voice of sanity, the guy legitimately saying to those around him, “What is wrong with you people and your cultural perceptions?”

AASIF MANDVI: Right. Yes. Well, there is definitely that. I think that [THE BRINK] gets a little zanier as the season goes along, but I think that is where we wanted to start from, was this place of, you have this character who is speaking from the perspective of the people of Pakistan, who is working for the Americans and working at the embassy, but he is a Pakistani man, and I think it was an important voice to have within the construct of this show. I mean, it is a show that looks at the world through the lens of American foreign policy, and I think it’s important to have people who are the recipients of American foreign policy, as it were.

AX: Do you feel that it’s important to have positive portrayals of Pakistani characters on American television right now?

MANDVI: I’m not going to say that it is important or not important – I think it is necessary for a dialogue, to create that dialogue, to have portrayals of people from the Muslim world who are just like you and I. And I think that’s what this does to some degree.

AX: At the risk of sounding absolutely ignorant, can you explain what’s happening at the end of the second episode of THE BRINK, when a man walks into the room where Jack Black’s character Alex Talbot has been tortured and says, “I am”?

MANDVI: No. The guy that comes into the room is Haroon Raja [played by Bernard White], who’s head of the ISI [the Pakistani intelligence agency], the guy that Tim Robbins [as U.S. Secretary of State Walter Larson] is looking for, who is the moderate within the Pakistani government that he can use to overthrow the dictator.  [Larson] is trying to get in touch with Haroon and he keeps sending Kendra off to try to find him, and that’s how we reveal him.

AX: Does your character Rafiq think that he could possibly get involved in this big a mess when he became a State Department driver?

MANDVI: No. I think this is the best job that Rafiq could get, and it’s probably a very well-paying job. So I think he’s probably overly educated for this position, but I don’t think he ever intended to be driving someone like Alex Talbot around. But I think also there’s a sense of, seize the adventure when it happens. He probably does feel a sense of, “Well, this is certainly better than the life I’ve been living.” If he can help bring down a dictator, then that makes good television.

AX: Is there anything else that you’re working on that we should know about?

MANDVI: I just wrote a book that’s out right now, called NO LAND’S MAN, which is in bookstores and online currently, and I’m working on THE DAILY SHOW.

AX: And what would you most like people to know about THE BRINK?

This interview was conducted during HBO’s portion of the Television Critics Association press tour.