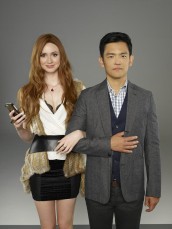 The series creator talks about the new ABC romantic comedy 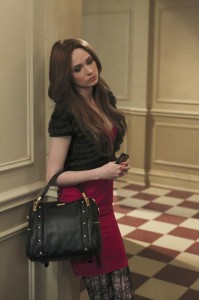 The premise of ABC’s new half-hour comedy SELFIE, premiering Tuesday September 30 at 8 PM, may sound a little familiar to anyone familiar with the musical MY FAIR LADY and/or its play progenitor PYGMALION, though there’s a contemporary twist. Eliza (Karen Gillan, previously of DOCTOR WHO) still has Henry (John Cho) helping her remake her image. However, rather than a Cockney flower seller, this Eliza is addicted to social media, so much so that she lacks skills to interact with actual human beings. Henry tries to help Eliza become someone who can make real friends, and Eliza tries to help Henry see the world more clearly.

SELFIE creator/executive producer Emily Kapnek previously created SUBURGATORY, developed AS TOLD BY GINGER and EMILY’S REASONS WHY NOT for television and worked as a consulting producer on PARKS AND RECREATION and HUNG. Kapnek is on the panel for ABC’s Q&A SELFIE session for the Television Critics Association. She remains afterward for some follow-up conversation.

EMILY KAPNEK: We kind of came into the PYGMALION element of it from behind. We started off talking about relationship shows and potential romantic comedies, what the modern obstacles are and the presence of technology in relationships, the presence of the ever-present phone and laptops and tablets at dinner tables and bedrooms and every sort of occasion. And we realized that, in telling a story where that is an obstacle and someone trying to wean themselves [off of constant personal technology], there was inherently a PYGMALION aspect. So we embraced it and went into it. But it didn’t start off from a place of, “Let’s remake or tell a new version of MY FAIR LADY or PYGMALION.

AX: There are a number of romantic comedies coming on TV this season. Can you talk about how SELFIE is different from some of the others?

KAPNEK: I haven’t really seen everything that’s out there and I don’t know how much of a forefront the romance is [in the others], but for ours, it’s a little bit back-burnered, in that you want to feel it growing, you want to feel the potential there. Our pilot [was] a little bit long and we’re probably going to re-shoot our ending a little bit. I think some people felt that the relationship and the chemistry between them was even accelerating in the pilot, so really the goal is to grow it and that you’re rooting for them. And one of the things – I think in the original material of MY FAIR LADY and PYGMALION [the play that inspired MY FAIR LADY], it wasn’t intended to be a romance, but one of the things that makes it hard to get on board is that Henry hasn’t done any growing [laughs], he hasn’t done any evolving, and so you understand that there is a road for him to walk as well, so I’m hoping that in telling a lot of those stories where John [as Henry] gets to grow and evolve that you really can root for these two in a way that you probably wouldn’t necessarily with the other versions, which are great.

I wanted to see him change a little and even in re-watching it, [at] the end, for sure, he misses her, the absence of her, he’s grown accustomed to her face, but you want to feel that he’s sort as a person and understands what it is that she’s not responding to. I mean, I love stories where men are in their own way, or not even men necessarily – just anyone that’s sort of silently suffering, [as in] THE REMAINS OF THE DAY, you’re unable to articulate your true emotion. Ultimately, to really root for them to be together, I think you need to feel like Henry’s going to progress and understand. And Eliza, too.

AX: How do you feel about the end of SUBURGATORY?

KAPNEK: Honestly, it’s so hard for me – I’m so excited for COMMUNITY and excited for ENLISTED [in their last-moment pick-ups]. Ultimately, it’s a decision that Warner Brothers is in control of, and it has to make sense for them as a business model and it’s tough.

AX: Are there any elements of SUBURGATORY that you were hoping to get to do that you can weave into SELFIE?

KAPNEK: They’re very different shows, so no. I think maybe the biggest hope is that we get to work with some of those fantastic actors again, and I have two of the writers from SUBURGATORY in the writers’ room. We have a great room of new writers for SELFIE. It’s been very exciting, but yeah, SUBURGATORY is still a very sore spot.

AX: There was a bit of a musical element in the first episode of SELFIE. Will we see that again?

KAPNEK: Yeah, it’s really a fun element. Everyone is always really game. We have such a great cast and everyone is always really game for those musical elements. By the way, we did it on SUBURGATORY, too. I love a good song and dance number. So yeah. But not in a way that feels heavy-handed or that we’re trying to trade on the MY FAIR LADY thing. But I think it’s always fun to have that whimsical element available.

KAPNEK: Absolutely. It’s interesting. There was that video circulating about the innovation of loneliness and people essentially feeling the more friends, the more followers you have, the more time you spend, you’re never alone, but you feel more alone than ever. John talked about our first meeting, when we sat down together, we were talking about social media, we were talking about the Internet in general and the exhibitionism and the voyeurism. If you’re not one or the other, or maybe you’re both, where you’re constantly putting yourself out there or you’re constantly digesting what other people are putting out there – “I’m ignoring my kids and constantly looking at pictures of your kids” [laughs].

I was telling him how much I knew about Jennie Garth’s divorce. It was like it was in the pilot and it wound up getting cut out, but I was obsessed, and I was so angry, and I was like, “Stop talking about your divorce,” but I also can’t stop reading about her divorce, and I have so much empathy for her. I was like, “Is it bad or good?” On the one hand, it’s crazy that she’s putting it out there, but also, there are human beings behind these stories and everyone’s looking for that connection, they’re looking to feel whole, and in some ways, I think the balance is taking what’s right from it, not letting it consume you so you’re only dealing with your device, getting out there and meeting the person and the people and having those real-life connections, social. But I think it’s a great tool. It’s not anti-social media, it’s really about finding the balance, and I think there’s a lot of cool, useful stuff Henry will learn from Eliza as well. She’s very smart and she’s very savvy and in some ways she’s a little bit like an idiot savant about this stuff, and she’s got stuff to teach him as well.