The actor talks about playing Mary Queen of Scots' suitor 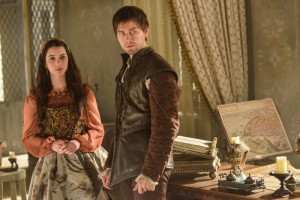 In the CW’s freshman series Reign, Thursdays at 8 PM, we are in sixteenth-century France. Fifteen-year-old Mary (Adelaide Kane), Queen of Scots, is here to wait for her arranged marriage to the French crown Prince, Francis II (Toby Regbo). Francis’ mother Queen Catherine (Megan Follows) is averse to the match, largely because court prophet Nostradamus (Rossif Sutherland) has warned that Mary will be the cause of Francis’ death. There’s also the matter of Mary’s increasing romantic interest in Francis’ half-brother, Sebastian, better known as Bash, played by Torrance Coombs, who was born to the king’s mistress. The difference between Francis and Bash isn’t limited to their mothers; Francis existed in real history, whereas Bash is an invention of REIGN creators Laurie McCarthy and Stephanie Sengupta.

Coombs has played in this historical period before – he was Thomas Culpepper in THE TUDORS. The actor has also been a series regular on jPOD, ENDGAME and HEARTLAND and appeared on SUPERNATURAL and BATTLESTAR GALACTICA; his film credits include AFGHAN LUKE and KILL FOR ME.

At a press event held by the CW for the Television Critics Association, Coombs proves ready and willing to talk about the realities of playing the fictional Bash.

AX: Since Bash is not a historical personage, did you do any research into the history of somebody who might have been in his position at court?

COOMBS: Certainly I did. I did some reading up on just the general shape of things and my girlfriend is huge into history, so she gave me the whole rundown of everything. I definitely wanted to have a sense of it, but I didn’t want to feel too beholden to it, because what can I really do [laughs]?

AX: Was there anything that you found especially helpful in playing the part?

COOMBS: Yeah. What’s so fascinating was [French King] Henry’s [played by Alan Van Spang] relationship with Diane de Poitiers [played by Anna Walton], his mistress, and the way that he would parade her around at court, as though she was the queen. And so imagining then her having a son with him who was very prominent at court and what Queen Catherine would think of that. So it informs everything, this idea that it wasn’t just some mistress, it is the mistress that is my mother. That definitely informed things a lot.

COOMBS: He’s certainly intrigued. I’ll tell you what it is – things are a little bit stuffy, and Bash is somebody who’s been passed over for the monarchy due to the way the system works, so he’s a guy that very much wants to break up that stuffiness and maybe bring the system down a bit. And in Mary he sees sort of a kindred spirit, somebody who’s not really your typical monarch, who’s maybe got a little bit of a fiery streak to her.

AX: We know that the historical Prince Francis died young. Can Bash survive Francis’ death, because he’s not bound by history?

COOMBS: Yes. Or he could die tomorrow. So I just have to show up every day and do a good job so they don’t kill me.

AX: You’re actually from Vancouver, Canada. Was there any difficulty in doing the British accent you use for Bash?

COOMBS: No, no, it’s been really smooth. It’s something I’ve had to do for other jobs before, and for whatever reason, I’ve just kind of had an ear for it, so it’s fun.

AX: REIGN shoots in Ireland. Had you gotten to work there before?

COOMBS: Yes, I did THE TUDORS Season 4, four years ago. And when I went back to shoot the pilot for this, it was a lot of the same crew, same drivers, same production office, and so I got to see a lot of old friends I didn’t know if I’d get to see again.

AX: How would you compare not the realism of the politics, but the way the characters approach court politics, in THE TUDORS versus REIGN?

COOMBS: The French court so far seems a little less ruthless. It’s just as terrifying, in that you always have to watch your back, but there isn’t quite the same larger-than-life character of Henry VIII, who really dominates the whole story of THE TUDORS.

AX: Henry VIII is actually on the throne in England at this point in the story of REIGN, isn’t he?

AX: Can you compare the approach to history in the two series?

COOMBS: Well, I would say that THE TUDORS was making an effort to be more of an historical drama and REIGN is a deliberate departure from the history in a lot of ways.

AX: Do you have any part of the set that’s Bash’s quarters where you’ve been able to feel like it’s your territory?

COOMBS: Not yet, and I think that maybe that’s for the best. I’m more at home in the outdoors, so far, is what we have [established for Bash]. When you see me, usually I can’t stay in the castle too long. I just have to get outside and go riding and do my thing.

AX: How do you like riding horses? I know it’s something you’ve done before – is it something you like, or is it that the producers just keep going, “Put this guy on a horse”?

COOMBS: A little bit of both. It all depends on the horse – when you get a good relationship with a horse, and it likes you, then it’s a great time. But then if you have a cranky one or it’s a little temperamental, I’m a little less skilled with those guys.

Every time [on horseback has been] for a show. As soon as you do the first one, as soon as somebody teaches you, then you can put it on a resume and people go, “He can ride a horse, hire him.” And then you show up and they realize, oh, he can get on and off and ride it around a bit. Thankfully, that’s really all you need to do most of the time. But it’s great. I’ve got this wonderful horse, his name is Sid, we’ve bonded a little bit, we’ve been riding around. He’s lovely. He’s huge and he’s really fast and I can barely contain him. He has this raw energy, but I think it’s kind of perfect.

COOMBS: I just shot an indie film that I’d love people to know about. The working title is EADWEARD. It’s about Eadweard Muybridge, who was sort of the inadvertent inventor of the motion picture, back in the late 1800s, and we shot it up in Vancouver. I just had a supporting role in it, but it’s going to be awesome.

AX: Is there anything else you’d like to say about REIGN right now?

COOMBS: I’m just really excited. I get some of the most fun stuff to do and I just couldn’t be happier to be a part of it and I actually think the show’s going to surprise a lot of people.