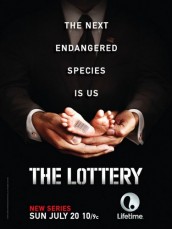 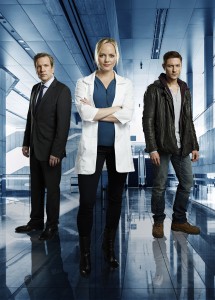 In Lifetime’s new series THE LOTTERY, Sundays at 10 PM, human women have become infertile – the youngest children on Earth are six years old. However, a medical breakthrough has allowed a small number of embryos to be fertilized. The U.S. President, played by Martin Donovan, decides to hold a lottery to determine which women will be allowed to carry the potential new generation.

LOTTERY creator/executive producer Timothy J. Sexton has, in broad terms, dealt with the prospect of human extinction before. He was one of the screenwriters (including the film’s director Alfonso Cuaron) for 2006’s CHILDREN OF MEN, based on the novel by P.D. James, about a time in the future when there’s a human pregnancy for the first time in twenty years. Sexton has also written FOR LOVE OR COUNTRY: THE ARTURO SANDOVAL STORY, BOYCOTT, LIVE FROM BAGHDAD, WALKOUT and THE LIBERATOR, but THE LOTTERY is his first episodic series.

Sexton, who is THE LOTTERY’s show runner with fellow executive producer Rick Eid, is present at a Q&A panel held for the show by Lifetime at Warner Bros. Studios. At a reception afterward, Sexton talks about his new gig.

AX: Is it a plot point as to why the infertility happened, or is it just, this happened and we’re going forward from here?

AX: So we don’t know if it’s ecological, metaphysical …

SEXTON: Or a mixture of all of them.

AX: Although they are very different in plot and tone, there are some basic similarities between THE LOTTERY and CHILDREN OF MEN. What is there about this specific kind of apocalypse that’s of particular interest to you.

SEXTON: I suppose that for me, the metaphor of infertility is essentially hope against the odds. The stakes in an infertile world are extinction, so immediately you have something very heightened. You get to speak about what is essential and human in a way that other devices aren’t quite as loaded as infertility.

AX: What are broadcast standards like on Lifetime? Is that even an issue?

SEXTON: I would say just a few language and nudity issues, but ultimately, we’re writing the same show for Lifetime that we’d be writing for Showtime.

AX: So you’re not adding something new to the process with CGI?

SEXTON: The only thing new we’re adding to the process is music.

AX: THE LOTTERY is shot in Montreal. Why was that city chosen?

SEXTON: The tax credit was certainly one of the factors, but Montreal is a city I feel hasn’t been looked at as many times as Toronto and Vancouver, so a lot of the looks were very dynamic that we were seeing in Montreal, and frankly, the competition for crews was less in Montreal, and there’s a great tradition of filming in Montreal, of art cinema and French cinema. It’s got a real tradition there. One of the things I love about Montreal – we can work until midnight, go out and have a great meal.

AX: Marley Shelton plays Dr. Allison Lennon, the scientist who comes up with the new fertilization procedure. She seems very intent on the outcome. Is her character motivated by wanting to be a mother herself at some point? Did she donate eggs?

AX: Michael Graziadei plays Kyle Walker, the father of one of the few existing six-year-old children. Obviously, Dr. Lennon and Kyle will intersect at some point. Can you give a hint as to how and why?

SEXTON: Let me see if I step on anything here. Let’s just say that the world has set them on a collision course and her big journey is going to intersect with his small journey. How that happens is teased out through seven or eight episodes.

AX: Had you seen Michael Graziadei or Marley Shelton in anything else that made you go, “Oh, they’re really interesting, I’d like to bring them in for this”?

SEXTON: Actually, I’d seen Marley in a TV show a few years ago that my producer showed me. Michael came out of nowhere. I’d never seen Michael before. I thought, “That guy’s a star.” We were up against another show, competing for him. It broke our way. I think he’s going to be a star.

AX: Anybody other name actors in the show? J. August Richards is in a few episodes …

SEXTON: Martin Donovan [as President Darius Hayes]. He’s a fun character to write, because he’s got the most rational argument of anyone in this world, and our show makes him the antagonist.

AX: Is his argument basically, “The kids are too rare to be left in the hands of amateurs”?

SEXTON: That’s his argument. We’re playing politics and trying to win popularity with our most valuable assets. So that tension – it’s fun to write an antagonist with a really smart point of view.

AX: You’ve got a ten-episode first season. Can you say if the end of the season wraps anything up, is it a complete cliffhanger, can there be a second season?

SEXTON: We’re headed to a point, a very interesting crisis, that would absolutely open the door for a second season.

SEXTON: Without saying too much, that could be the exploration of Season 2.

SEXTON: I have a Spanish-language film called THE LIBERATOR, a story about the life of Simon Bolivar, with Edgar Ramirez and Danny Huston.

AX: Is there anything else you’d like to say about THE LOTTERY right now?

SEXTON: I’m excited about the show. It’s my first foray into television, so I feel the bravery of an innocent in the project.