Exclusive Interview: Rachel Boston on A RING BY SPRING and Season 2 of WITCHES OF EAST END

The actress chats about her various projects 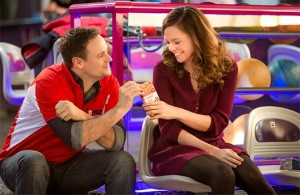 Actress Rachel Boston’s career is going through an enchanted phase right now. Not only does the Tennessee-born actress play hereditary magic user Ingrid Beauchamp in Lifetime’s THE WITCHES OF EAST END – Season 2 is about to begin production – but she also stars in Hallmark’s A RING BY SPRING, which airs on Hallmark Channel.

Boston, whose credits include AMERICAN DREAMS, THE EX LIST, (500) DAYS OF SUMMER and IN PLAIN SIGHT, is present at Hallmark’s banquet for their producers, stars and the Television Critics Association. The actress is seated at a table with her RING cast mate Stefanie Powers.Boston turns her chair sideways to chat about both her TV movie and series gigs.

ASSIGNMENT X: Does A RING BY SPRING have a slight supernatural element to it?

RACHEL BOSTON: Yes, it does!

AX: So do you feel like you’re sort of immersed in the world of precognition and spells at this point?

BOSTON: I guess that magical element I do hope to carry into a lot of my work after my WITCHES experience [laughs], but [in RING] I play a young woman.  A psychic, played by Stefanie Powers, tells me that I’m going receive a ring by spring or I will never marry. And that just lights a little fire under my soul to go out and put myself out there and consider why I haven’t been married, if I do want a partner in life and what life path I want to go down.

AX: How did you fit A RING BY SPRING in with your shooting schedule for WITCHES?

BOSTON: We wrapped THE WITCHES OF EAST END and I’d worked with Ken Johnson, who is the amazing producer of A RING BY SPRING, before on a romantic comedy. He sent me the script while I was filming WITCHES and asked when my hiatus was and we were able to work it out. As soon as we went on hiatus, I filmed A RING BY SPRING.

AX: Do you have a favorite scene or episode from WITCHES’ first season?

BOSTON: I loved the experience of bringing back Adam [Jason George] as a ghost. There was something so mystical about a woman who had fallen so deeply in love and having the ability to bring him back and say goodbye. And I think that’s something we all go through in our experience on Earth – how do you deal with the grieving process? There are so many people in my life, like my grandfather, that I just dream I could bring back for a day so I could say just beautiful words to him. So that was a really special episode for me.

AX: When do you resume production?

BOSTON: I believe sometime in March or April, so hopefully very, very soon we’ll have Season 2 ready for you.

AX: Is there anything you can tease about Season 2 of WITCHES?

BOSTON: Oh, I don’t know anything yet. I know I’m very excited about Asgard and I can’t wait to see who came out of the portal and if I get to go through the portal [laughs].

Whoever came from Asgard looks very strong. I don’t know who he is, but I can’t wait to meet him.

BOSTON: Well, A RING BY SPRING, that’s the next film.

AX: And is there anything else you’d like to say about either A RING BY SPRING or WITCHES OF EAST END?

BOSTON: I think 2014 is going to be a year filled with love and magic, and I can’t wait for all of the adventures we have ahead of us and I’m just so honored and blessed to be here at Hallmark tonight to promote this movie, and I can’t wait to go back to shoot WITCHES. It is such a blessing to work with Lifetime and Hallmark. They have such heart-based programming. And so to work with networks that really are inspired by stories that are about family and faith and spirituality and really do touch the heartstrings, I feel very, very blessed.

Article Source: Assignment X
Article: Exclusive interview with Rachel Boston on A RING BY SPRING and WITCHES OF EAST END