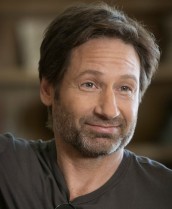 The actor also talks THE X-FILES and Comic-Con 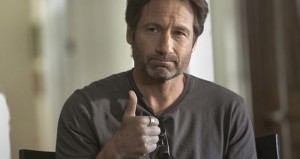 David Duchovny as Hank Moody in Californication on Showtime | © 2014 Showtime

It’s recently been announced that Duchovny is set to star as a police detective in NBC’s thirteen-episode series AQUARIUS, about Charles Manson. Duchovny is at a party thrown by CBS, Showtime and the CW for the Television Critics Association, where he talks a little about Hank’s big sendoff.

AX: Where do we find Hank at the start of Season 7?

DAVID DUCHOVNY: He’s got to get a job this year. He wants to provide for his family and be a family man this year, so he goes to work in the television industry. [joking] Because it’s just that easy.

AX: How closely, if at all, does it resemble your own experience in the television industry?

DUCHOVNY: Oh, it’s a comedy, so it doesn’t resemble it at all. I was in a movie called THE TV SET about five or six years ago that was probably a lot closer – it’s probably the best movie about making television that I’ve seen.

DUCHOVNY: No, Hank’s on an pretty even keel this year. And this is the last year. It’s all over.

DUCHOVNY: Probably a little bit of everything. Shows on cable generally don’t go seven years. We went seven and they rarely go [longer], so I think we ran our course.

DUCHOVNY: It’s hard to say. Every season, we’ve had a whole new guest cast come in and I’ve just had fun with all of them, so I can’t really say. But I feel really lucky that I’ve worked with a lot of great [actors] – aside from our regular cast, I love our guest cast.

AX: The inevitable X-FILES question – are you aware of THE X-FILES comic books?

DUCHOVNY: Yeah. I saw a couple – I was at Comic-Con. I haven’t read one, but it’s the story of Season 10. Because we did nine seasons, it’s going on with Season 10.