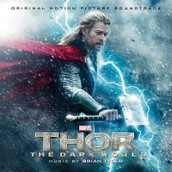 Back in the comic book day, The House of Ideas teamed The Thing with a guest superhero star of the month for Marvel-Two-in-One. That series’ consistent match-up of four-color brawn has now been musically equaled in the space of one year by Brian Tyler, who follows up his entry into Marvel’s cinematic universe for IRON MAN 3 with even more powerfully potent results in THOR: THE DARK WORLD. But while it might not necessarily be an even match comparing a playboy in a souped-up suit of armor with an alien-Norse demigod, the evil elf-sponsored end of the universe versus an ersatz Mandarin’s power play definitely necessitates Tyler beefing up the symphonic-choral muscle to roid’ rage heights, delivering a breathless powerhouse of a superhero score that merits as one of the most gloriously in-your-face soundtracks in a time of increasing timidity when it comes to letting film music be music.

Perhaps no other composer in Tyler’s big-budget popcorn league has created a sound that’s at once traditional old school scoring and rock concert stadium ready for such beyond energetic films as EAGLE EYE, BATTLE LOS ANGELES and THE EXPENDABLES. But even when he’s not overtly employing rock-rhythmic, Tyler’s symphonic approach goes for the stuff of the golden age gods who reveled in themes. And the motif doesn’t get more massive than with Thor’s mighty hammer. Carrying the weight of the Nine Worlds, Tyler blasts out of the gate with a terrific main Thor melody, then continues on with enough leitmotifs, choruses, throttling samples and cliffhanging action to slake the thirst of any fan of the days when Goldsmith trod the earth, while also tapping into the life force of John Williams and James Horner – as channeled through Tyler’s zest for ever-escalating action ramps. But if there’s one big reason that THOR: THE DARK WORLD is so rippingly great, then it’s because Tyler’s music reaches right back to those Marvel Two-in-One years when superheroes weren’t lethal Freudian head cases two shades removed from the villains they fought. Here, the word is valiance and nobility. It’s exactly that sense of soaring nobility that links Tony Star; to The God of Thunder, and likely the many more Marvel stars that are likely to come Tyler’s way after this one-two punch of great superhero scoring – a confidence no doubt given by Marvel having Tyler score a memorable, mighty Studio Fanfare that caps off this album.

Some fans might go all Loki that the music of THOR: THE DARK WORLD isn’t presented in “show order” as it were. But the peaks and valleys this sequencing presents makes for an even greater thrill ride, especially when heard in hard copy format via Intrada Records.

Clink on the link to Purchase the THOR: THE DARK WORLD soundtrack