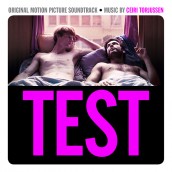 A gay dancer in early 1985 San Francisco deals with relationships and the beginning of the AIDS pandemic in this well-reviewed drama that not only throws back to an era that marked the end of sexual innocence, but also a musical time that marked the highpoint of a specific movie scoring synth sound best embodied by the likes of Tangerine Dream. And for many fans of that progressive German group, the decade also marked a high point with the propulsive sheen of scores that embodied the stylish LA gloss of HEARTBREAKERS and MIRACLE MILE. Welsh composer Ceiri Torjussen (BIG-ASS SPIDER) might be a one-man band, but you’d swear by just how well he replicates the Dream’s rocking computerized sound that you’re in the primo TD line-up of Edgar Froese, Paul Haslinger and company.

TEST is a high mark for a spot-on soundtrack replication that not only entices Dream admirers, but also builds on their trademarked vibe for a bleeping, haunted sound, at once enticing while also getting across a subtle, haunted resonance of carefree days about to end in a big way. Torjussen varies the score’s soothing quality with a strong percussive attitude that also works as then-modern dance music. It’s a notable soundtrack debut for a composer who’s been steadily racking up stylistically impressive scores, a cool blast from the synth-glo past when robotic-rock electronic attitude was all the rage – a time that TEST will make any admirer of the era miss with new appreciation.