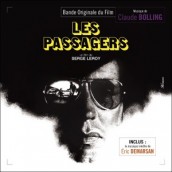 What Americans among us would have known that the first adaptation of popular thriller novelist Dean R. Koontz (written as SHATTERED under the pseudonym of K.R. Dwyer) was done for a French movie? But then, who’d have realized that its composer Claude Bolling wasn’t the first musician in the driver’s seat for a movie that ultimately appeared on our shores as THE INTRUDERS in 1977. But thanks to this intriguing Music Box Records release, both musical takes are out there to savor for as the road got paved for far better known Koontz movies as HIDEAWAY and WATCHERS. But there’s nothing like the first time, as a father and son are pursued through dangerously winding Italian byways by his mom’s psychotic ex, which gives modus operandi to Bolling’s bonkers approach. With such English language scores to his credit as SILVER BEARS, CALIFORNIA SUITE and the chilling mummy revenge music of THE AWAKENING you’d be hard pressed to think of this music representing a white-knuckled steering wheel. Instead, Bolling’s PASENGERS are breezily accompanied by a sweet theme (which even gets a piano bar variation) and gamboling Baroque music.

Slightly more typical is a sultry film noir sax and lush mystery befitting an eccentric take on Bernard Herrmann – which turns out to be Bolling’s ironic way of capturing a man who envisions that his love is still along for the ride. This just might be the least menacing psycho killer score of all time, which is part of the deceptively jaunty charm that the filmmakers wanted when they tossed the first score by Eric Demarsan to the curb. But like the boyfriend who won’t take no for an answer, his music is here as well for the ride. Having remained in France with such well-regarded scores as THE ARMY OF SHADOWS and LE CERCLE ROUGE, Demarsan’s score actually comes across as the saner of the two. One can definitely hear a mind turned to murder with low horns and the child-like bell percussion that makes for a truly sinister lullaby theme that spells out a Euro thriller, with pursuit given with pop piano and guitar in a manner reminiscent of Ennio Morricone. It’s a low key, effectively eerie approach that also has jazz to spare, but in a way that also chimingly spells out its villain’s intentions, With the movie unavailable in America, it’s up to listeners reading Giles Loison’s informative liner notes to figure out which of these two composing drivers in fact suited THE PASSENGERS best in one of the more interesting after-and-before score releases to hit since Film Score Monthly put out multiple variations on THE APPOINTMENT. Here, Bolling and Demarsan handle Koontz’s mystery vehicle with an equally impactful ear for a dangerous road with more than a few cool jazzy detours.

Click on the link to Purchase the LES PASSAGERS soundtrack