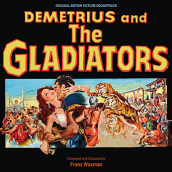 Franz Waxman is definitely entertained in the Roman arena

Franz Waxman took over from Alfred Newman for this more action-oriented sequel to the smash Cinemascope hit THE ROBE,  music that lavished in the widescreen opportunities for sex, slaying and that good old time Hollywood religion. Making an on-screen point that he was taking a very big spiritual cue from Newman’s original work in addition to themes from its holy melodic clothing, Waxman’s score is a colorful blend of sword-and-sandal spectacle and messianic message so particular to this genre, music that’s exciting and moving in equal measure. While not trying to ethnically capture the sounds of a Roman Empire under the mad collapse of Emperor Caligula, Waxman’s uses the full, studio system force of the orchestra to give DEMITRIUS a feel that’s both sainted, and stately, movingly conveying its hero’s spiritual transformation (complete with a finale of “Gloria”) to make this score both a tribute to Steiner’s lionization of Newman’s work, as well as one that works terrifically on its biblical epic own.