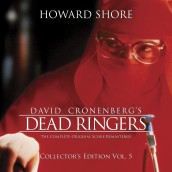 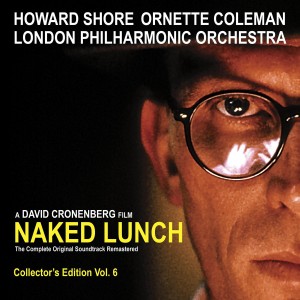 Howard Shore made his musical bones on the body horror of director David Cronenberg, a match particularly made in visceral-intellectual heaven with DEAD RINGERS, NAKED LUNCH and CRASH, three scores that show the chilling diversity in what’s arguably the most rewardingly unhinged (and ongoing) collaboration between two creepily-minded auteurs of this dark side of Bernard Herrmann and Alfred Hitchcock. Now Shore gives this twisted trio a collector’s edition re-mastering, made complete with additional music that truly brings out his music’s mesmerizing power.

1988s DEAD RINGERS marked Shore’s fourth collaboration with Cronenberg for the most realistically disturbing movie the director had made so far, especially as it was based on the true, awful fates of twin gynecologists. But beyond its instruments for operating on mutant women, what made DEAD RINGERS emotionally unnerving was the soft, poignant sadness that Shore gave to its score. Gifted with what’s still the most deceptively beautiful theme he’s written for Cronenberg, DEAD RINGERS‘ theme plays like a waltz for two men inextricably bonded together. Shore’s silken strings and flute lead his thoroughly accessible, and tenderly melodic approach – at least for a short while before Shore contrasts one brother’s luxurious calm with the other’s drug-addled unraveling. A sinuously lush orchestra leads into piercing strings, the score’s delicate themes gradually unraveling with its feeling of inescapable, almost soaring tragedy that makes for one of Shore’s more Herrmann-esque scores. It’s a power that comes from his deft psychological probing as opposed to shock effects, creating “horror” scoring at its most silken in its mix of pathos and ghastliness.

1991s NAKED LUNCH threw reality out in the wastebasket of Interzone, the alternate drug reality inhabited by junkie novelist William Burroughs’ barely disguised stand-in of “Bill Lee.” Taking an equal seat to dine on this drug-addled score is jazz legend Ornette Coleman, a beat-jazz musician who truly could understand the 50s dope friend groove. His wild, untamed sax playing over Shore’s brooding score captures that elusive sound of “pure” jazz. The score reaches its terrifying apex with a pistol-shooting game of “Robin Hood” gone wrong, capturing the kind of life-changing agony that usually gets turned into a novel if the offender is literary-minded. 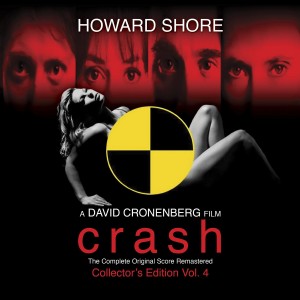 Shore had started out for Cronenberg with the eerie synth-filled scores to SCANNERS and VIDEODROME, an approach he’d mutate into the hypnotic, electric rock groove of 1996s CRASH (and continue on with for COSMOPOLIS and their most recent effort MAP TO THE STARS). Here, the sound of guitar-shredding metal is brilliantly appropriate for characters that can only get off in the aftermath of automobile wrecks. Shore twists about the music with their enthused, unholy fetishism, scraping, banging and clawing at all manner of iron and piano gut detritus to create a true “metal” score, but done in a completely unique way that’s anything but longhaired rock and roll. As topped with flutes, CRASH has an Oriental Zen quality to it as well that makes the score even more hypnotically unsettling, going for voice-like tonal clusters that recall the pioneering moog work of Walter Carlos. The orchestra also plays its part here a la NAKED LUNCH in capturing increasingly shivering realization of just how bizarre this behavior is, giving CRASH the impression of a modernistic tone poem as Shore gets into these characters’ metal-embedded skins to unsettling, and often beautiful effect. It’s one factor that makes the re-polished DEAD RINGERS, NAKED LUNCH and CRASH stand out more than ever as disturbed evolutions into the outer realms of movie scoring, as practiced with surgical, intellectual precision by two men who really know who to mess up human beings.

Click on the link to Purchase the NAKED LUNCH soundtrack

Click on the link to Purchase the DEAD RINGERS soundtrack

Click on the link to Purchase the CRASH soundtrack