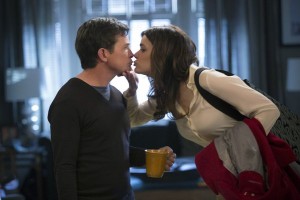 First, viewers should note that THE MICHAEL J. FOX show premieres in a one-hour block at 9 PM with two episodes, “Pilot” (reviewed here) and “Neighbors,” before settling into its regular Thursdays at 9:30 slot next week.

Everybody knows what a biographical drama is, but this season, network TV is having a mini-boom in biographical comedy. There’s THE GOLDBERGS, about the childhood and family of series creator Adam Goldberg, there’s TROPHY WIFE, about the marriage and family of series co-creator Emily Halpern and, by far the best of the bunch, there’s THE MICHAEL J. FOX SHOW, created by Will Gluck & Sam Laybourne for their fellow executive producer and leading man.

For those who are very unfamiliar with TV history yet have somehow found their way to this review – first of all, thanks for reading. Second, Fox was a movie (BACK TO THE FUTURE) and TV comedy (FAMILY TIES, SPIN CITY) who was diagnosed with Parkinson’s disease. He has remained in the public eye, writing books and doing acclaimed guest star turns, and he and his wife and kids all finally decided it was time he returned to full-time work.

In THE MICHAEL J. FOX SHOW, Fox plays Mike Henry, a former Manhattan news anchor who has Parkinson’s but doesn’t let it beat him down. Like Fox, Mike’s wife Annie (Betsy Brandt) and kids (Juliette Goglia, Jack Gore, Conor Romero) all would love him to stop scrutinizing their lives and go back to work. When Mike’s old pal, news director Harris Green (Wendell Pierce), comes calling, Mike decides to return to his old job.

There are obviously some differences between being a news reporter and being a TV star, which are made to work in SHOW’s favor, since the news can encompass just about anything and bring in any storyline the creative staff want to play with, rather than being soundstage-bound. This will never be THE NEWSROOM, but the format gives the show enormous potential range, which is explored pleasingly in the pilot with Mike’s first story on his return to work.

Fox plays Mike as sweet, a little blind to when he’s overstepping with his loved ones but otherwise sharp and philosophical where another man might turn snarky. He is charming and likable, with the ability to make us feel like we’re watching something of import at all times, even when the incidents are minor, because it affects Mike and we come to care about him fairly quickly.

There’s great chemistry between Fox and Brandt, who shows off strong comedy chops, and both actors work well with the performers playing their children. Pierce is another strong player, giving us a boss who is nine-tenths in control and one-tenth anxiety.

THE MICHAEL J. FOX SHOW starts out as intelligent and enjoyable, and all signs point to it continuing in this manner.