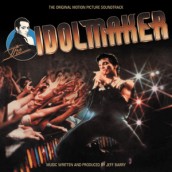 Taylor Hackford’s 1980 feature debut THE IDOLMAKER was an auspicious start for this musically inclined filmmaker and producer, whose love for old fashioned r & b rock shone through WHITE NIGHTS, LA BAMBA, RAY and CHUCK BERRY HAIL! HAIL! ROCK ‘N ROLL. Based on the starmaking life of Bob Marcucci that saw the discovery of Frankie Avalon and Fabian, THE IDOLMAKER attempted the difficult task of creating “new” versions of classic jukebox tunes that would be just as rocking to then-contemporary youth tastes.

It says something about how well Hackford succeeded in that we’re now seeing Varese do a rare “song” album release that spiffs up the soundtrack vinyl for THE IDOLMAKER‘s first release on CD. While Hackford couldn’t get Phil Spector, legendary album producer Jeff Barry (“Be My Baby,” “Do Wah Diddy”) insured that just about every IDOLMAKER number was a spot-on recreation that you could imagine as a top-charter back in the bobbysoxer era, covering all the bases of those halcyon, music-making days from the mid-50s to the early 60s.

Spector muse Darlene Love’s “Oo-Wee Baby” has the doo wop rhythm to spare of any proto Supremes, while the mild country sound of Colleen Fitzpatrick’s “I Can’t Tell” evokes the more soulful development of female singers to come. Rocking doo wop for guys and gals hit their strut with “A Boy and A Girl,” while “Sweet Little Lover” is swinging bubble gum stuff, For instrumentals, “Come and Get It” and “I Know Where You’re Goin’” have a sexy horn strut to spare that’s perfect for a backseat rumble at the drive in. Timeless power pop like Jesse Frederick’s “Here Is My Love” is just as topical as Rick Springfield’s “Jesse’s Girl.” And when “However Dark the Night” builds with the gusto of Neil Diamond (as performed by actor Peter Gallagher), you can positively see the sweat dripping from the singer as teen girls clammor about him, ready to rip those sequins off. But the most passion comes from the stirring solo piano and rising orchestra that mirrors the gut-ripping affirmation of “I Believe It Can Be Done” (sung by tragic star Ray Sharkey), which is also heard as a soulful, jazzy score piece on a bonus track.

Still one of the great “rock” soundtracks from the retro film era that produced the likes of THE BUDDY HOLLY STORY and AMERICAN HOT WAX, THE IDOLMAKER is spot-on musical nostalgia that still shines. Now here’s hoping that Varese continues releasing these great American movie songbooks on CD.

Clink on the link to Purchase THE IDOLMAKER soundtrack