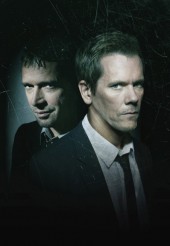 News: How THE FOLLOWING is different from THE VAMPIRE DIARIES – TCA 2013

The new Fox thriller THE FOLLOWING debuts January 21 and stars Kevin Bacon as former FBI agent Ryan Hardy who is called back into service when serial killer Joe Carroll (James Purefoy) escapes from prison (who captured him many years before).

At today’s Fox Winter 2013 TCA session, executive producer and creator Kevin Williamson spoke about THE FOLLOWING and how different it is from his other cult hit THE VAMPIRE DIARIES.

“When you’re doing one thing, the next thing you do, you don’t want to do the same thing,” admits Williamson. “So you’re always looking for the differences and what separates it from just the last two years of your life versus what could be the next two years of your life. And this is a project that has been percolating in my head for many, many years in some form or another. With VAMPIRE DIARIES, there’s a supernatural element to it. It’s Gothic romanticism hinged in sort of a vampire/werewolf landscape with switches and stuff. And it’s more DARK SHADOWS. [THE FOLLOWING] takes place today in the Eastern seaboard. And also the characters are older and I’ve got several generations of characters that I get to play with. I get my young characters, but I also get to write adults. I’m not a child anymore.”

For Purefoy, who plays the sinister British killer who Williamson admits owes a bit to Hannibal Lecter from the Tom Harris series of books and movies, he feels his fellow British serial killer certainly didn’t shoot for the sky as much as Carroll does.

“I’ve been thinking a lot about this and about SILENCE OF THE LAMBS and that as we shoot the show more and more, I’m more and more convinced of how little Hannibal Lecter’s vision and how unimpressive it is,” Purefoy says with a laugh. “Like, I mean, really, he could only see up to the next meal.”

Article Source: Assignment X
Article: How THE FOLLOWING is different from THE VAMPIRE DIARIES