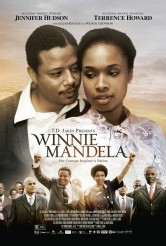 An uneven but still engaging biopic

The life of Nomzamo Wilfreda Zanyiwe Madikizela-Mandela, better known as Winnie Mandela, is so eventful and complex that trying to condense it into one hour and forty-seven minutes of screen time is an immense challenge. Director Darrell Roodt and fellow screenwriter Andre Pieterse, working from the biography WINNIE MANDELA: A LIFE by Anne Marie Du Prez Bezdrob, don’t always meet the challenge successfully – there’s plenty of “Wait, who’s that person?” and “What just happened?” here – but there are enough incidents to keep things interesting. More, with Jennifer Hudson as Winnie and Terrence Howard as Nelson Mandela, the film has two highly potent, watchable leads.

We meet Winnie at the time of her birth, with her schoolteacher father lamenting a sixth daughter rather than a first son. In childhood, Winnie is a good student and a good combatant, able to beat boys at stick-fighting (though her father disapproves). By the time Winnie (now played by Hudson) is old enough to go to college, her dad expresses pride in her accomplishments. Then Winnie meets Nelson Mandela through mutual friends. He is already a popular (and much spied-upon) civil rights activist. They flirt, court, fall in love, marry and have children – all under the scrutiny of South Africa’s security forces.

Nelson Mandela’s fight against apartheid as part of the African National Congress eventually leads to his arrest for treason. He is sentenced to life imprisonment. Winnie is devastated, but vows to continue the fight, and becomes a heroic figure. Then she’s arrested and kept in solitary confinement for four hundred days. When she is finally released, she remains defiant, but now more than ever, she is in favor of violent confrontation with the South African authorities – and she doesn’t like her own authority being challenged. Understandably paranoid, she acquires the “Mandela United Football Club,” a squad of young bodyguards who see traitors everywhere.

Trying to cram as many important incidents into the narrative as possible, the filmmakers sometimes miss big pivotal moments. When did the determined young woman who’s a hospital social worker at the beginning start to approve of “necklacing” (the practice of burning people alive with car tires around their necks) and how culpable is she for the actions of her bodyguards? The filmmakers seem skittish about providing definitive answers, with the results that seem more indecisive than enigmatic. There are also influential figures who come and go – in some cases, we’re not told who they are or where they came from, so we don’t know enough to understand why they hold such sway with Winnie and/or Nelson Mandela.

The good news is that there’s enough here to create genuine curiosity – at the film’s end, many viewers may be inspired to read much more on the subject. Certainly Hudson gives a performance that makes us see why Winnie is so personally beloved by many she knows and so magnetic to much of the public. Howard has gravitas and warmth as Mandela, and the two actors have powerful chemistry together.

WINNIE MANDELA cuts, pastes and sometimes blurs history. However, what it shows is still worth seeing.