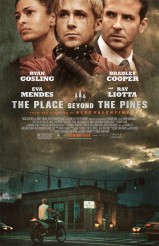 ©2013 Focus Features
THE PLACE BEYOND THE PINES
Reviews

Movie Review: THE PLACE BEYOND THE PINES

A movie with ambitions which exceed its grasp

There is no lack of ambition in THE PLACE BEYOND THE PINES, a film that aims for a novelistic sense of scope, drama and resonance. The structure is certainly brave and director Derek Cianfrance, who wrote the screenplay with Ben Coccio and Darius Marder, has a gift for naturalism. Naturalism, however, isn’t the same thing as realism, and the more the filmmakers insist on their theme, the harder it is to buy into it.

Given that how the story unfolds carries with it some big surprises, it’s probably best to just provide the set-up. Luke (Ryan Gosling) does motorcycle stunts with a traveling carnival, constantly on the move. However, when he returns toSchenectady(which, according to the production notes, is Iroquois for “the place beyond the pines”),New York, he is visited by last year’s flame, Romina (Eva Mendes). Romina accepts a ride home on Luke’s motorcycle, but says she’s living with a man, Kofi (Mahershala Ali) and can’t go out with Luke again. However, Luke stops by the house again and this time encounters Romina’s mother and infant son, who bears a great resemblance to his daddy, Luke. Luke falls head over heels for fatherhood and comes to believe that if he can just provide enough money for Romina and their little Jason, they can live together as a family. This is despite Romina refusing to move out of the house she shares with Kofi, who is stable, kind and evidently tolerant of Romina’s continued interest in Luke. Wanting to provide for his child and win Romina back, Luke feels he needs money. At the suggestion of newish friend Robin (Ben Mendelsohn), a former robber who has never been caught, Luke turns his motorcycle-riding skills to the lucrative trade of holding up banks.

Then Avery Cross (Bradley Cooper) enters the tale. Avery is the son of a judge who has set his legal training to one side to become a police officer. He also has an infant son, though he takes fatherhood much more for granted than Luke does.

There is another crucial factor/plot arc here as well, but it’s impossible to discuss without giving away a lot of the story.

What’s good about THE PLACE BEYOND THE PINES? It has some quite impressive stunts, with Gosling and Cooper in the credits as performing some themselves. As many cinematic vehicle chases as we’ve seen, Cianfrance manages to do something new here, giving it a you-are-there quality that is for once realistically more terrifying than thrilling. There are also some motorcycle stunts at the carnival that induce goose-bumps. The details of Avery trying to cope with his brother cops have an intriguingly offhand quality, inviting our empathy with the beleaguered character.

As for the performances, Gosling is particularly strong as the tormented, determined Luke, Cooper is up to handling both the sincere and the glib sides of Avery and Mendelsohn is wholly convincing as the laid-back Robin.

What’s wrong with the film? First, by the finale, we understand the story is trying to move us by asserting something that so utterly goes against what a lot of people (including this reviewer) believe that it’s hard to credit we’re being asked to take this seriously, let alone be affected by it. A full verbal synopsis given to an associate (who wasn’t afraid of spoilers) had the person blurting, “That’s terrible!”

Leading up to this are a number of elements that may reflect some actual human behavior but feel dramatically arbitrary. Mendes’ Romina seems intended to be a tragic figure, caught between primal attraction and social safety, but the character instead comes off as inconsiderate, wishy-washy and dangerously passive-aggressive. If she doesn’t want Luke to know about his son, why does she go to see him? If she does want Luke to know, why doesn’t she ever offer up the faintest suggestion of how she thinks things ought to go? Why, even after Luke does something particularly heinous right in front of Romina, does she express the sentiment that Luke should be in their son’s life? Perhaps we’re meant to view Romina and her behavior as prismatic, open to interpretation, but given the totality of the situation, it feels more like the writers didn’t try to empathize with her and imagine what she might say and do.

Cooper is allowed more dimension and internal coherence as Avery, though the movie seems to judge him harshly for actions that are readily understandable. The kicker, though, is the final sequence. No doubt, a percentage of viewers who on some level buy into the viewpoint of THE PLACE BEYOND THE PINES will find the film quite potent. Others will just be deeply exasperated, if not actively insulted.