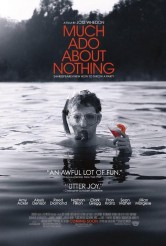 (c) 2013 Lionsgate
MUCH ADO ABOUT NOTHING
Reviews

If you want to introduce a phobic newcomer – say, a nervous teenager – to the works of William Shakespeare, director/scenarist Joss Whedon’s film adaptation of MUCH ADO ABOUT NOTHING is a great place to start. Set in modern moneyed suburbia, where houses have video security systems and the cops carry guns, the text is as ever ‘twas (with cuts to bring the film in under two hours), but the dialogue is delivered as though everyone is speaking colloquial English. Reed Diamond as Don Pedro especially excels at this – he is so fluent and relaxed with the language that he makes us forget people don’t talk like this all the time nowadays.

MUCH ADO, which takes place on a long weekend at Leonato’s (Clark Gregg) estate, revolves around two sets of conspiracies. One is the friendly, comic determination of friends and family to bring together the clearly meant-for-each-other but antagonistic Beatrice (Amy Acker), Leonato’s niece, and war hero Benedick (Alexis Denisof). The two bicker with each other and profess animosity, so everybody decides to let Beatrice and Benedick “overhear” their friends talking of how each is secretly yearning for the other.

A much darker plot is hatched by Don Pedro’s brother Don John (Sean Maher), recently defeated in battle, to convince Pedro’s young friend Claudio (Fran Kranz) that Claudio’s betrothed Hero (Jillian Morgese), Leonato’s daughter, has been unfaithful, on the night before the wedding, no less.

The comedy and the drama co-exist comfortably in the same universe, so that Hero’s horror at being humiliated by her beloved Claudio at their wedding ceremony is full of honest wounded feeling, but it doesn’t contradict the wonderful absurdity of police officers Dogberry (Nathan Fillion) and Verges (Tom Lenk) trying at all costs not to offend the local higher-ups.

The film isn’t averse to slapstick, either, with Beatrice and Benedick having extreme reactions to listening in on conversations about how their supposed enemy is in fact sick with love. Acker does something physical that’s especially brave and startling in one scene, so that we don’t know whether to laugh or yelp in alarm.

Acker also has a becoming toughness under Beatrice’s quippy exterior, so that when she snaps, “Dead, I think!” in a moment of crisis, we understand then and there that this character will not let the matter rest, as indeed she does not. Denisof gives Benedick a wariness so that we can easily imagine that his philosophy of dealing with the opposite sex is not an abstraction that Beatrice will cure, but rather something he’s developed specifically as a reaction to dealing with what he sees as rejection by Beatrice.

There’s a very playful quality to much of the film – this is a house party we’d like to join, what with its witty, attractive guests and handsome surroundings. The black and white cinematography by Jay Hunter adds to the timeless quality inherent in the production. We can see cell phones and cars and handguns while we’re hearing Shakespeare’s words, and it all looks just a little like the black-and-white European films of the Sixties, so that we’re in a wonderful somewhere where groups of friends really do move Heaven and Earth to make sure their nearest and dearest get what’s best for them. The love stories aren’t just between Benedick and Beatrice and Hero and Claudio, they’re between the male buddies and female confidantes who join forces to get the couples together.

Kranz is deft at going back and forth between playing Claudio as amusingly naïve in romance and friendship and icily agonized when wounded. Morgese is eloquent and elegant as Hero, who here is a participant in her own rescue rather than the bystander of some productions. Maher seems suitably jaded as the implacably mean Don John and Riki Lindhome is fiercely rebellious as his pal/bedmate Conrade (the role is gender-switched from the original). Gregg exudes warmth and decency as Leonato.

There’s an intriguing note of class consciousness in the scenes with Fillion’s Dogberry, who rather than being the foot of many productions is in a state of perpetual panic that he or his officers may somehow offend the folks who pay his salary. Fillion is delightfully wound up, while Lenk plays a suburban cop who aspires to urban world-weariness. Teaming up the two actors in these roles is one of the most inspired aspects of the production.

Whedon is often praised for his creation of original characters. Here he brings original interpretation and a lot of love to a familiar text. People who’ve never seen Shakespeare before can easily grasp the whos, whys and wherefore art thous of the story, and everyone, whether they know MUCH ADO ABOUT NOTHING backwards and forwards or are encountering it for the first time, should have a thoroughly enjoyable, immersive experience.