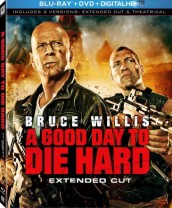 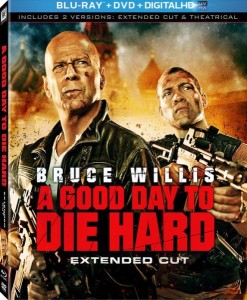 A GOOD DAY TO DIE HARD – Obviously going into this film you have to realize it is another DIE HARD movie with a protagonist that is quite the indestructible force. After four films of John McClane (Bruce Willis) battling the odds and bad guys and with numerous wounds along the way, seeing him do it again and in extreme fashion is obviously the next step. Set in Russia, McClane travels there to find his son who he believes has gotten himself into to trouble. When McClane finds him, the trouble only begins as a whole horde of bad guys guns for the duo and once again he must fight for his life and that of his son, who happens to be adept at firing a gun as well.

While the plotline is certainly not as complex as some of the previous installments, like I said, at this point we aren’t expecting to see another first DIE HARD where a complex plot to steal a bunch of money is happening and McClane battles a group to stop it. This has bigger explosions, bigger chases, more bullets while sacrificing the plot. Which means not a lot of purists will be happy but the action aficionados will be cooing. On Blu-ray it is that much more bold and beautiful and really the best way to see this. Rent it if you are hesitant, buy it if you love out and out action with the familiar character you have grown to enjoy. 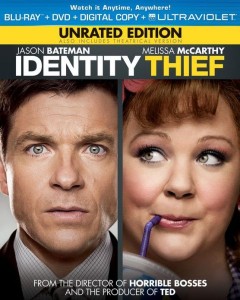 IDENTITY THIEF – Jason Bateman may be riding high with the new season of ARRESTED DEVELOPMENT on Netflix so this is a great time for his comedy to come out on video this week where he gets to show off his chops alongside Melissa McCarthy in this pretty good film about a serious subject that is only getting worse by the year. Obviously to make a movie like IDENTITY THIEF you have to make it over-the-top crazy in order to make it work since most of the time a normal person just needs to prove themselves to be the victim in order for it to be made right. However, in this case, extreme measures have to be taken in order for Bateman’s character to make amends not only to his credit score but to his new bosses and the police. With suspension of disbelief in place, this is a pretty funny comedy with some genuine laugh-out-loud moments from McCarthy and Bateman helms the film in hilarious fashion. Definitely worth checking out. 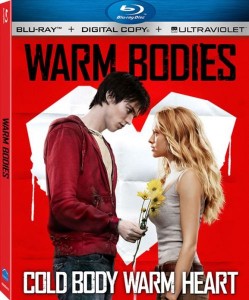 WARM BODIES – Speaking of leaving your brain at the door, WARM BODIES is a must in order to believe that a flesh-eating zombie would be able to come back and find romance in a human female. Luckily, this isn’t a film that takes itself too seriously nor should it. Some of the best moments come before the romance even begins where we learn about the boring life of an undead walker as he meanders from place to place and sometimes tries to feed on humans when he gets hungry. These moments are most certainly the most fun and funny to be found in a zombie comedy/romance. When the zombie in question eats the brain of the boyfriend of the main girl, he becomes attached to her (because in this zombie world they experience the feelings of the person they eat). Romeo and Juliet references abound here and surprisingly it isn’t as dumb as it sounds and it works in a strange way to have a romance blossom under the circumstances of the apocalypse. Interesting stuff and worth renting when you have a chance. 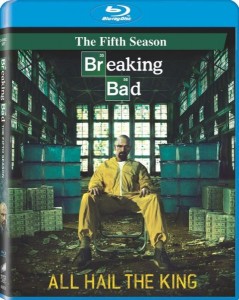 BREAKING BAD: THE COMPLETE FIFTH SEASON – All the things you hear about BREAKING BAD are correct. It truly is one of the best shows on TV. Walter White (Bryan Cranston) at the end of Season 4 made the decision that he needed to take out Gus Fring in order to protect himself and his family but maybe more importantly to White to secure his place as the drug kingpin that he had become. He did so with a great plan and it worked. Now, completely in charge of his fate, White doesn’t stop with his plan to secure his spot in recruiting former Fring muscleman Mike (Jonathan Banks) and his long partner Jesse (Aaron Paul). The transformation of White – from innocent school teacher looking to make money for his family before he dies of cancer to drug kingpin – has been a glorious thing to watch in the past seasons and it all comes together in Season 5 as White is ruthless and cold. He cares not for how much money he has but the power he has and is willing to do anything to keep it. That becomes even more problematic when his brother-in-law in the DEA takes one step closer to discovering he is the evil Eisenberg. Excellent stuff and a must own if you haven’t seen this season. 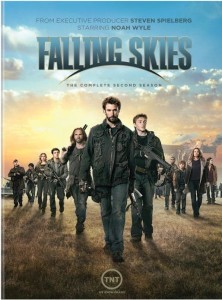 FALLING SKIES: THE COMPLETE SECOND SEASON – FALLING SKIES is one of those shows that seems to fly under the radar when people discuss good science fiction TV. But with the third season coming up it begs the question as to why it isn’t thought of or more popular. It may be that it is on a station that is not known for being a heavy when it comes to science fiction in TNT. But it is a show that should be checked out if you are a fan of big, bad aliens coming to Earth to kill everyone on the planet and small band of rebels doing everything they can to stop that from happening. Things get even more interesting in Season 2 when the small band of rebels learn that a bigger group of survivors are hunkered down fighting the aliens. But not all is wonderful in this revelation. Despite not having the best acting or the best special effects, the family ties, the friendships and good plotline make this a show science fiction fans should check out before it returns for Season 3. 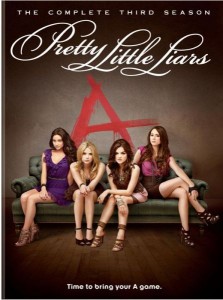 PRETTY LITTLE LIARS: THE COMPLETE THIRD SEASON – ABC Family’s unique show about four close friends that may or may not have been involved in a murder of one of their other friends continues this summer with another season. So in the meantime, here is your chance to catch up on what you missed in the last season to prep for the upcoming one. A usual there are plenty of secrets being tossed around and untimely deaths as well as new schools and new players that make life anything but normal. Of course, romance is always in the air on this show, so it isn’t all doom and gloom. All 24 episodes of the third season are included here along with a new featurette, deleted scenes, gag reel and webisodes.