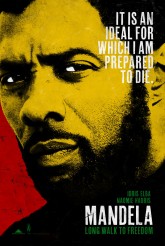 Idris Elba delivers a powerful performance, but the subject matter is too expansive for the running time

Nelson Mandela, who spent twenty-seven years in prison and emerged to become the first president of post-apartheid South Africa, is a man who has earned not only respect but study. His story is epic, complex, full of turns and an illustration of what can be accomplished with the right combination of will, wit, charisma, conviction and patience.

What Mandela’s story is not, however, is something easily condensed into a two-and-a-half-hour running time. This is a problem that MANDELA: LONG WALK TO FREEDOM never really solves. With Idris Elba (of TV’s LUTHER) as the adult Mandela, we certainly get the power and presence of the man, but the script by William Nicholson – based on Mandela’s 1994 autobiography – tries to fold in so many significant events that we don’t get a clear picture of what’s happening around him.

The film begins briefly with Mandela’s childhood in rural South Africa, then brings us forward to when he’s a lawyer in Johannesburg. He courts and marries his first wife Evelyn (Terry Pheto), but the marriage falls apart due to Nelson’s extramarital affairs and Evelyn’s aversion to her husband’s political work. Nelson then becomes involved with social worker Winnie (Naomie Harris) and soon the two marry. Meanwhile, South Africa’s white-run apartheid government is oppressing black (and other non-white) citizens with brute force, resulting in massacres at protests. Mandela and the African National Congress fight against this. Mandela and his companions are put on trial for treason. They expect the death penalty and do not plan to appeal, but the judge, not wanting to create martyrs, sentences them to life in prison instead.

Mandela serves twenty-seven years. Winnie is separately arrested and serves four hundred days in solitary confinement. She emerges radicalized and committed to violence, including violence against those in the black community whom she deems “traitors.” With South African threatening to collapse into civil war and the weight of world opinion (reinforced by boycotts) against apartheid, the government reaches out to Mandela.

In the film, Mandela is shown as being a pragmatist first, and a peacemaker after that. He sees violence as an acceptable tactic when talk will not work in the face of continuing brutal injustice. He is also depicted as a man who will stand his ground no matter what, getting the Afrikaner government to make concessions through calm intractability.

This may all indeed be the way things happened, but because so much is going on, we get very little of the causes, only the results – we not only don’t know how Mandela rose to leadership of his fellow activists, we barely know who the other people are. Do they have any influence on him or each other? Are there turning points for Mandela, or is he the same man simply surviving crushing circumstances to eventually triumph? Elba vividly expresses the weight of cumulative experience pressing down on Mandela, but more assistance from the narrative and a little more breathing room would be welcome.

MANDELA does make time for the relationship between Nelson and Winnie, with his heartbreak at the irrevocable changes he sees in her and her hardening into someone who seems beyond partnership. Harris is excellent at depicting the changes in Winnie, from warm young woman in love to steely solo leader.

Screenwriter Nicholson and director Justin Chadwick both punch up the pace and illustrate what Mandela is up against by showing the poverty in the townships and the horrors of police and army aggression against the populace, including the notorious Sharpeville massacre. The film moves along at a brisk pace, so that something is always happening, it’s just many scenes could use more context.

For anyone unfamiliar with Nelson Mandela, MANDELA: LONG WALK TO FREEDOM is a good introductory crash course. However, reading about the South African leader will provide deeper understanding; to do audio/video dramatic justice to Mandela and his story, a miniseries is probably in order.