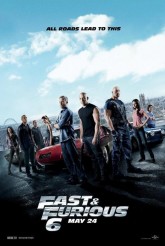 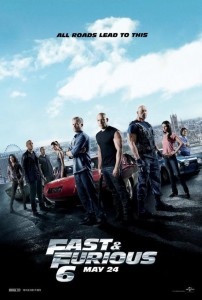 THE FAST AND THE FURIOUS film franchise has always been about outlaws. In FAST & FURIOUS 6, more than ever before, our heroes break not only the laws of property and speed, but also gravity, physics and frequently plausibility. And hey, why not? When the characters start talking about the differences between one motor and another, it’s very possible that the technical details are real. Otherwise, as one of the gang observes, this adventure is very James Bond, though 007 never made a midair catch quite like the one we see here.

FAST & FURIOUS 6 bring back Michelle Rodriguez as Letty Ortiz. Fans of the FAST films will recall that Letty apparently was killed back in the fourth film. Director Justin Lin (who’s been with the series since FAST # 3) and screenwriter Chris Morgan (working from Gary Scott Thompson’s characters) don’t simply plonk Letty into the action and hope nobody notices she was missing. Quite the opposite: much of FAST 6 involves the search for Letty, and we get a full explanation of how she survived, what happened to her and why she hasn’t sought out soul mate and fellow racer/car thief Dom Toretto (Vin Diesel) in the interim.

At the beginning of the movie, there is an almighty mess in the streets of London. This prompts international law enforcement official Luke Hobbs (Dwayne Johnson) to seek out Dom and his gang – all of whom have retired. Dom is on a peaceful island off the coast of Spain, along with his sister Mia (Jordana Brewster) and Mia’s love/Dom’s best bud Brian O’Conner (Paul Walker). Dom and Brian squabble over who is going to be a bigger influence in the life of Brian and Mia’s little son and everyone seems happy, if slightly restless. Then Hobbs turns up and shows Dom a recent photo of Letty. It seems that the only way to find Letty is for Dom and Brian to get the old gang back together and help Hobbs take down a crafty bunch of rogues headed up by Shaw (Luke Evans). Shaw is trying to get acquire the last bit of tech that will allow him to build a tech-stopping device and sell it to the highest bidder, which could result in global catastrophe. Can Dom, Brian and their friends save the world? Do their cars go fast and make really loud noises when they smash into things?

The racing, both in pursuit and regular competition, is as fast and furious as it’s always been in these movies. The whole espionage angle neither suits nor clashes dreadfully with the core elements. It’s there to provide a reason for the many vehicular and several foot chases, which is fine. When the filmmakers try to use the spy angle for culture-clash comedy, things tend to falter – there are jokes in here somewhere, but the script doesn’t seem to play up the right ones. There’s also the “You’re doing this again? Really?” factor of having the only two black characters (Tyrese Gibson and Chris “Ludacris” Bridges, both reprising their earlier FAST roles) also be the only two class clowns.

The stunt work is impressive. Special mention should be made of a couple of hand-to-hand clashes between Rodriguez as Letty and mixed martial arts fighter turned movie star Gina Carano (HAYWIRE), who plays Hobbs’ partner. Both actresses (as opposed to their stunt doubles) clearly do a lot of their own moves and display a becoming level of ferocious proficiency. For that matter, Rodriguez’s mixture of danger and vulnerability gives FAST 6 a little jolt of emotional adrenaline – we can understand why Dom is so keen to get her back.

On the other hand, some of the big stunts are a little oversized for the reality level here.  One heroic moment in particular elicits more giggles than applause. Still, Lin and Company generally know what they’re doing, particularly exploiting the fun of having Diesel and Johnson appear together and play off each other, as Dom and Hobbs try to out-tough one another. And of course, there are the car scenes, which are, as before, the real point of the film and which, as before, look fantastic.