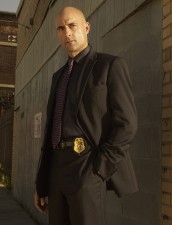 The actor talks about reprising his role in the American adaptation of the U.K. series 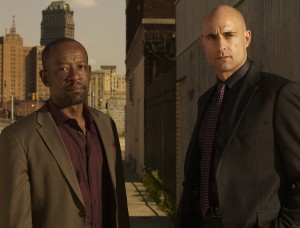 American television frequently remakes series that originated on British television: ALL IN THE FAMILY and THE OFFICE are two of the more successful examples. The crime drama LOW WINTER SUN, set and shot in Detroit, is a remake of the 2006 series of the same name that was set in Edinburgh, Scotland.

What makes LOW WINTER SUN unusual is that Mark Strong, who starred in the first version, is recreating his role as Frank Agnew for AMC’s edition, which is airing its first ten-episode season Sunday nights at 10 PM. Frank a police detective who is coerced by a colleague, played by Lennie James in the U.S. production, into murdering a third detective – and then winds up assigned to investigate the case.

London native Strong is a prolific actor who has been in a host of high-profile feature films; recent projects include ZERO DARK THIRTY, TINKER TAILOR SOLDIER SPY and JOHN CARTER.

During and immediately after a question and answer session hosted by AMC for the Television Critics Association press tour, Strong talks about why he’s stepping into the same river twice.

ASSIGNMENT X: Was part of the appeal of doing the American remake of LOW WINTER SUN to star in an American series?

MARK STRONG: Not really, because as I’ve said, there had been other offers of various things over the years, and I’ve always kind of resisted, because of the location thing, but it’s my part. I created Frank, and it’s so hard as an actor to turn down the opportunity to revisit him, and I can’t imagine what it must have been like if I’d been sitting at home, watching this show on TV, thinking, “Oh, hold on a second.”

AX: What made you decide to play what is essentially the same character twice? What are the differences between the two incarnations?

STRONG: I think I chose to play him twice because you don’t get that opportunity as an actor, ever. Normally, you play a part, you put it to bed, it’s done. The idea that you can resurrect a character seven or eight years later, move him from Edinburgh to Detroit, was too fascinating a creative opportunity, I think, to let go by.

And the difference is an interesting question, because essentially he’s me, but of course, the culture of a cop in Scotland, in Edinburgh, is very different from one in Detroit. I think what’s been fascinating has been to take a three-hour original and make it ten hours. We’ve cherry-picked the best moments of the original, but kind of let it fly. Now we’ve got an extra element to the story that we can run with and Frank now belongs to Detroit.

AX: Was part of the appeal of doing the American remake of LOW WINTER SUN to star in an American series?

STRONG: Not really, because there had been other offers of various things over the years, and I’ve always kind of resisted, because the relocation factor is such a big part of the decision. My family’s in London. I pretty much moved to Detroit. But it’s my part. I created Frank, and it’s so hard as an actor to turn down the opportunity to revisit him, and I can’t imagine what it must have been like if I’d been sitting at home, watching this show on TV, thinking, “Oh, hold on a second.”

AX: Have you ever played a role and then had somebody else play it later?

STRONG: No. Never. I mean, roles I’ve turned down have gone on to be played by someone else, but that’s okay, because you make the decision at the time you make it, and decide that it’s not for you, so I have no problem with that, but the idea that you have the opportunity to play something that you pass on – I can’t speak for all actors, but personally, I really wanted to have another crack at him and move him somewhere else.

AX: What are you getting to do with Frank this time that you didn’t get to do the first time?

STRONG: Well, the emotional depth, for example. In the original, he commits a murder for the sake of the love of a woman who he believes is his saving grace, the thing that’s going to give him a second chance at life. And in the U.S. series, it goes further. I don’t want to make any spoilers or anything, but that idea and that thought is taken much further. For example, you get to meet his ex-wife. In the original, I didn’t even know I had an ex-wife.

AX: Given that the original LOW WINTER SUN was made in 2006, does the change in decade make any difference?

STRONG: It’s kind of a timeless story, so I don’t think there are any time-relevant differences between the original and this one. A whole half of this story is new. I mean, the bit that I have with Lennie [James, as Frank’s fellow detective Joe Geddes] that Joe and Frank play together, the murder of a colleague and the fallout from that, is all cherry-picked from the original. But there’s a whole group of people, the characters of Damon [James Ransone] and Maya [Sprague Grayden] and their story, that is brand-new and invented by [U.S. series adapter/show runner] Chris [Mundy] and the writers, so there’s a kind of joining, certainly in the first three episodes, I would say, of the two worlds.

AX: Are there differences in the tone of the endings between the two versions?

STRONG: It’s very similar, actually. Because at the end of the original, there was a very dark final note that was struck. This is kind of less brutal, but it does make you suddenly realize that the whole journey that you’ve been on is a crazy one.

AX: Do you have any feature films coming up?

STRONG: I’m going to squeeze a couple in before Christmas and there’s already one lurking after January, so if we come back for a second season, I’d like to keep that well ticking over, too.

AX: What’s exciting to you about television right now?

STRONG: At the moment, I’m loving the fact that the Scandinavian TV is becoming so popular. There are a lot of American remakes of Scandinavian shows, but I watched the original KILLING and the original BRIDGE in the original languages with subtitles, and it’s interesting how the spotlight has moved to these. They’ve been making programs like that for years in Scandinavia, but it’s just that people’s taste is changing. So you have shows like DEXTER, you have shows like THE FOLLOWING with Kevin Bacon and James Purefoy, which is a network show. Ten years ago, you would never have a network show doing stuff as dark as that. HANNIBAL is another case in point. It’s as if taste has somehow shifted, so what I’m really enjoying is that people are becoming very discerning about what they watch. They’re not letting it wash over them.

AX: In the original version of LOW WINTER SUN set in Edinburgh, were you playing Frank as Scottish?

AX: And here you’re playing him with an American accent, so you still haven’t played him with the way you actually talk?

STRONG: No, I never have. Frank has always been from somewhere other than where I’m from.

AX: Does that help you with playing him somehow?

STRONG: Yes, because the thing I like about acting, because I come from the theatre, is the disconnect from me, whether it’s costume, accent, character, whatever it is. The disconnect means that it feels like acting. To be honest with you, I don’t know how I’d play myself.