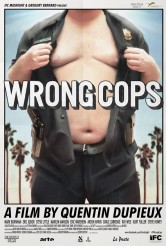 If Salvador Dali had gone indie film, you might expect the end result to resemble the satirically brilliant work of Quentin Dupieux. As set in an alternate universe called Los Angeles, Dupieux’s movies are an anything-goes collection of bad behavior, obnoxious truth-seeking and the serene acceptance of the insane, whether he used a psychic killer tire to deconstruct the movie going experience itself in RUBBER, had a dweeb’s hunt for a dog take down self-help cultism in WRONG, or now uses police corruption as an acerbic commentary on the music biz in WRONG COPS – just one of the many hilarious malfeasances in an increasingly WTF oeuvre.

A French transplant to LA whose taken to Edge City’s absurdities like a fish to mineral water, Dupieux’s work has a skewed, surrealist vision, especially when accompanied by his retro-Casio synth soundtracks that themselves are part of some ironic joke. Almost daring audiences to go with the kind of weirdly inventive flow that might have employ the POV of dog poop or a head-exploding tire rolling down the desert highway to the conjecture of a poisoned audience, Dupieux’s WRONG COPS  just might be the most “accessible” film yet for the cult director. He’s collected such oddballs as Eric Wareheim (of THE TIM AND ERIC SHOW) as an officer whose sexual harassment knows no bounds, THE F-LIST’s Mark Burnham as a nerd cop whose dime bags come with tails, and fellow Frenchman Eric Judor (WRONG) as a mutant headed policeman with an incessantly-played song that only he thinks is killer. Among those they bust are Goth rocker Marilyn Manson as a particularly creepy teenager, and Daniel Quinn (SCANNER COP) as an accidentally shot neighbor who just won’t die.

Moving from one appalling incident to the next like an episode of ADAM 12 as shot in Bizarro World, Dupieux’s WRONG COPSisn’t so much a collection of sketches as it is some inspired fever dream of low-key insanity, packing a dryly sardonic and distinctive wit that make his movies unlike any other laugh-by-committee comedy out there. 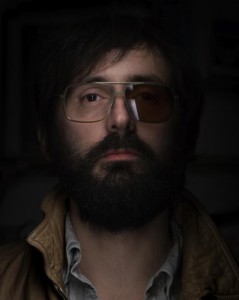 ASSIGNMENT X: Your movies have a very funny, ironic and detached surreal quality about them that remind me of movies like REPO MAN. Where did your influences come from?

QUENTIN DUPIEUX: Well, I’ve never seen REPO MAN. But I do have a lot of influences. The first is that I’m not interested in filming real life. I don’t even want to talk about an era, or a date. To me, my movies are set “somewhere else.” To me, the fun part of making a movie is to think differently.

DUPIEUX: Well, when I was fifteen years old, I was obsessed with John Carpenter movies like HALLOWEEN, THE THING and CHRISTINE. I was also obsessed with Tobe Hooper’s THE TEXAS CHAINSAW MASSACRE. I still love those movies. They gave me the inspiration to shoot shorts with my video camera. My main influence right now is a French writer-director named Bertrand Blier, whose most popular film here I think is BUFFET FROID. His films really feel that they don’t take place in this world.

AX: I’d say your movies are far funnier than horrific, a la Carpenter. What are your comedic influences?

DUPIEUX: I was really into Monty Python, which is my main influence when it comes to funny things that are abstract and surreal. I also love the Spanish director Luis Bunuel, who made some amazing French films in the 70s like THE PHANTOM OF LIBERTY and THE DISCREET CHARM OF THE BOURGEOISIE. They’re smart and funny at the same time. 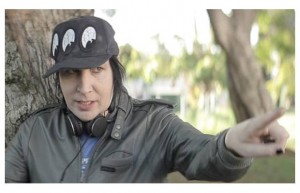 AX: What’s particularly funny about WRONG COPS is that a lot of their outrageous excesses have actually occurred in one form or another when it comes to corrupt policemen, even if it might not involve stuffing marijuana into live rats. Did you base their antics on any real cases?

DUPIEUX: No, I did not! (laughs). But on the last day of shooting the movie, I read news about drug dealers who were hiding a huge amount of their stuff in dead animals. And I thought, ‘Wow! I thought this was just some sort of crazy joke!” Crazy stuff like this happens all the time in this city, and everywhere on the earth. I’m sure right I can connect a lot of things in my movie to real life, but that’s not what I’m trying to do. I’m trying to get away from it. 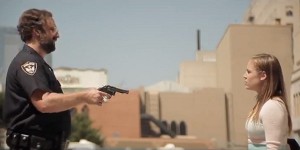 AX: There seems to be a lot of improvisation going on in your movies.

DUPIEUX: I’m totally against improvisation, because the dialogue is really important to me. When an actor says something that is not written, I usually shut down the camera, because when you get out of the script, suddenly you’re not making a movie anymore. The dialogue has to be perfect. But some actors in WRONG COPS like Eric Wareheim and Marilyn Manson have a good grasp of improvisation. For instance, when you see Eric humping a woman’s car, I just asked him to be bad to her car. But then he came up with humping. It was so funny that I kept it. But that’s different, because it’s body language, which is based around my visual idea. I’m fine with that, especially if it’s funny, fresh and works with the movie. I enjoy it when actors bring stuff like that. What I don’t like is when they change the dialogue.

AX: Like John Carpenter, you compose your movies’ scores. And your “songs” plays a particularly big part in WRONG COPS. How did you musical appreciation start?

DUPIEUX: I think the music comes from the same side of my brain that makes the movies. I’m trying to reach the same thing. When you create stuff, you don’t know exactly why you’re doing it in a certain way. So I don’t see myself as a director. I just see myself as an artist doing “stuff.” In that regard, I’m not a musician. I’m just recording things. I don’t know what they are, and I don’t care. I just want to have fun. I’ve been making music for 15 years. So for WRONG COPS, I just picked some pieces from my discography. There’s nothing original in it in terms of the songs.

AX: Even though all of your movies take place in America, do you think there’s a “French” sensibility to them?

DUPIEUX: I have no idea. I know there’s something French about them, because that’s where I come from. But honestly, I have no fucking clue.

AX: How do you see America, and Los Angeles in particular, as all of your movies take place in or around there?

DUPIEUX: It’s weird. I know LA well now after having been here for three years. That’s the vision I have. I know it’s vibe, and how the world works here. And I love it, even if it’s a little scary sometimes. It’s easy to feel alone in a super-big country like America. France isn’t a big country, so it’s hard to get lost there. But I truly love LA. I love to work, and be creative here. It’s the only thing I know about the USA.

AX: There are many different genres of comedy. How would you describe the niche where your films lie, and what do you think makes them so distinctive?

DUPIEUX: Maybe the point is that I’m not trying to make movies. I’m just following my instinct, and that’s not what you’re supposed to do when you make movies. You’re not supposed to be an artist because you’re spending someone else’s money. You have to think about that responsibility all the time. Because I see myself as an artist instead of a director, that may be why my movies are like this. I’m not trying to be successful in the industry. If tomorrow Sony Pictures called me to direct a 50 million dollar movie I haven’t written, I’m not sure I could do it, or that I’d want to do it.

WRONG COPS premieres in theaters and on VOD now!