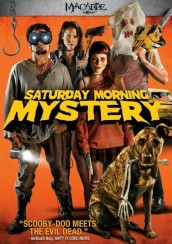 On what would Dario Argento do, giving viewers the swerve and mourning Daphne 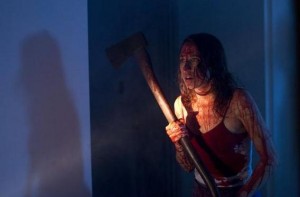 SATURDAY MORNING MYSTERY is a pretty fun and different horror flick that takes what would be a real-life ghost hunting foursome and their faithful canine companion and throws them into a ghastly mystery that proves there aren’t really ghosts but people on the other hand are much worse.

The Scooby Doo live action films have been done many times – including multiple movies with the actual licensed name – but none of them has the sheer brutality or clever payoff as SATURDAY MORNING MYSTERY.

Director Spencer Parsons sat down to talk about his film and how it went about getting made and the idea of combining different horror tropes to create a unique film.

ASSIGNMENTX: SATURDAY MORNING MYSTERY is actually very dark, were you going for the anti-SCOOBY DOO thing purposely or did it just happen out that way?

SPENCER PARSONS: My condition of doing SATURDAY MORNING MYSTERY was I wanted to do TEXAS CHAINSAW MASSACRE but the producers wanted to do SCOOBY DOO. I love the SCOOBY DOO part now but when I was presented with the original I thought “God damnit this is stupid.” I thought a much better idea was one where we do SCOOBY DOO with tits or what if there was a SCOOBY DOO type crew but with real ghosts. What we ended up doing was much more interesting and the combination of the two is fun.

AX: Do you feel that’s kind of what’s wrong with horror these days? Too many unoriginal and remade films being churned out?

PARSONS: I get bored with the horror genre. It is a genre where churn them out and make them because it is easy to make money or think it is easy money. So many rely on clichés which end up pissing off the audience. The best horror movies are the ones that surprise the f*** out of me.

AX: There are a lot of swerves in this film. You don’t see the payoff coming because you build up the whole fake or real ghost angle so much. You don’t see what really is going on it hits the audience in the face.

PARSONS: That’s another thing that comes from SCOOBY DOO and what I originally thought was a bad idea from the beginning but turned out to be a real advantage. The endings of SCOOBY DOO are always the ultimate narrative FUBAR. If you don’t recognize it, then you are actually not delivering what the fans want. We took the plotting as an opportunity to build in the crazy stuff that happens and the surprises are rational enough that you don’t seem them coming. The ultimate of the SCOOBY DOO endings are like what Dario Argento did with his early works and his endings were always delivered with such punch and violence. A lot of the time making this we were thinking “What would Dario Argento do?” So we worked into the story so that it would be going entirely one way and then we pulled the rug out from people. Not surprise for the sake of surprise but to help it make it more frightening.

AX: That said, you don’t shy away from pulling out the brutality, especially for what would be the Daphne character.

PARSONS: Yeah, Daphne gets it the worst. It bugs me a bit for a girl to get it the worst but I hope we did it in the right dramatic genre spirit.

AX: How did you go about getting the mansion where the film takes place?

PARSONS: It is an interesting story. The producers bought this mansion and before they renovated it they thought maybe they should make a horror movie first. They thought of what it would be like to do a story in this mansion and all the ideas were of a ghost mansion. All the commonalities seemed like a SCOOBY DOO or Saturday morning ghost chaser. And I thought we could go one step further into the TEXAS CHAINSAW angle and they were up for it. The one hitch was that it had to be done in six weeks. So we had three weeks to write a scenario for the film, during which time we would be pre-producing the cast and the crew. That left us with 10 days to do the shoot. The great upside for a 10 day shoot was we were able to call in favors without the crew having to risk working too long without getting paid upfront. We were able to get more seasoned and enthusiastic crew than we would otherwise. From there we came up with the plot and set pieces and structure to bring this Scooby like gang into a haunted house and it turns out to be really nasty. Because we had the cartoon characters to lean on and a good cast we were able to improvise the behavior and most of the canon.

AX: Was there any concern about using characters basically from the cartoon?

PARSONS: You always worry a little bit about that but because the characters are different and don’t have the same names it isn’t a direct infringement. We openly talked about the idea that someone would chase their childhood dreams in an extreme fashion. That would be their job, a ghost chaser and debunk these spiritual hauntings. That exists in a lot of horror movies but we loved the fact that we could kill off a bunch of these characters.

AX: What’s next for you?

PARSONS: I’m doing a short film based on a true crime and it’s a very noir-ish called BITE RADIUS. I have another short coming up as part of an anthology film called YOU SCREAM, I SCREAM. It has shorts by Huck Botko, who wrote THE LAST EXORCISM, Jack Perez, Danny Rhodes and others. I’m batting clean-up and doing the last story, which is very horror in the vein of MANIAC.

SATURDAY MORNING MYSTERY is available now on VOD from iTunes and through Xlrator Media streaming.