©2013 CBS
Robin Williams in THE CRAZY ONES
News 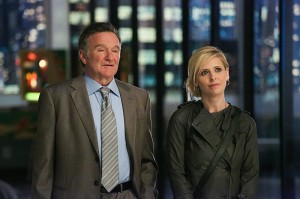 In the new CBS comedy THE CRAZY ONES, Robin Williams returns to his first network TV series since MORK & MINDY playing an unorthodox ad agency genius. He’s paired with his daughter Sydney (Sarah Michelle Gellar) who keeps him in check when he goes off the rails.

The series debuts September 26, but at the CBS Summer TCA’s, Williams spoke about his return and the similarities between his first TV gig and his latest.

“It was weird, because on MORK & MINDY [it was] an open field,” says Williams. “They would literally put in the script ‘Mork does his thing here,’ which was like ‘Riff, riff little white boy, here we go.’ So, in a weird way that’s kind of the same thing here, but the idea now is that there’s a lot more to talk about just in terms of products, the world and technology.”

Williams also admits how important it is to establish the character so people can buy into it.

“Initially with MORK & MINDY, I think they bought into the innocence of the character,” says Williams. “And [here] I think they have to buy into not just my character, but the relationship with everybody else and see someone who really has good ideas and bad ones. There’s a line, I step over it and [Sydney is] there to kind of say, ‘Come back, Dad.’ And the idea of creating and at the same time failing, that’s what makes it interesting.”

For Gellar, the chance to do a comedy series as opposed to her more dramatic work on BUFFY and RINGER was exciting.

“I think that the one thing about BUFFY that was so wonderful, was we hit all of those different [levels],” says Gellar. “It was funny. It was dramatic. It was scary. So I had a chance with that and because comedy was something I was always interested in, I sort of kept my feet in there, whether it was hosting SATURDAY NIGHT LIVE or hosting the MTV MOVIE AWARDS. Ultimately, this is what I wanted to do. I think it’s more challenging. I always say ‘if you cry on camera, then people feel for you. They feel it. It’s much harder to get someone to laugh.”