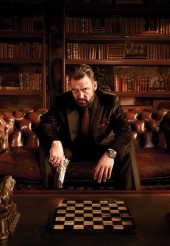 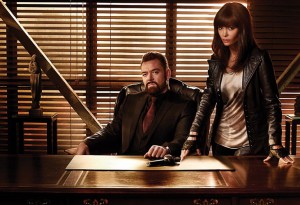 DirecTV’s thriller series ROGUE, which concludes its first season Wednesday May 29, stars Thandie Newton as former Oakland police detective Grace Travis. Grace returns to her secret identity, minus her badge to investigate the death of her son. Marton Csokas plays Jimmy Laszlo, Grace’s lover and possible nemesis, who runs a shipping business that has a shady side.

Csokas was born in New Zealand, holds a Hungarian passport and currently resides in the United States. Worldwide audiences know him as the elf Celeborn in the LORD OF THE RINGS trilogy. Other recent credits include ABRAHAM LINCOLN: VAMPIRE HUNTER, DREAM HOUSE, THE DEBT and ALICE IN WONDERLAND. According to IMDB, he’ll soon be seen as Damien Lord in SIN CITY: A DAME TO KILL FOR and as Dr. Kafka in THE AMAZING SPIDER-MAN 2.

In person, Csokas proves soft-spoken and reflective as he talks about playing his highly conflicted father and businessman character on ROGUE.

AX: How did you become involved in ROGUE?

MARTON CSOKAS: Well, it’s good to have a job, it’s good to earn a living, and that’s an important factor in life, isn’t it, no matter what one’s profession. But I did like the charms of the piece, and I liked the idea of the qualities that it has in terms of Greek tragedy, I liked its neo-noir aspect, and I loved the opportunity to paint a psychological portrait of a man who to me was emblematic of the American Dream gone sour – within his family, within his own aspirations.

AX: Jimmy Laszlo is not your first gang boss …

CSOKAS: No, it’s not. I played a Russian – I played Yorgi in XXX: STATE OF THE UNION. Although [Jimmy’s] not a gang boss, really, not in that manner. To me, he runs a shipping business, importer/exporter, and his father ran a hardware store. That’s where he learned how to run a business – he comes from the Old World, his father was born there, and he’s first-generation American. So you do what you need to do. And he’s learned his trade, he goes off into the big wide world, you pay people to do this, to do that, nothing bad, no one would call it immoral or unethical, there’s no life and death involved. But once you put your foot in the pool, then you’re going to suffer the consequences and you’re going to need to look after yourself and those around you and it becomes a deep, dark forest that has mortal implications. And so we find Jimmy Laszlo at a time when he’s tired of it. He wants to get out. He’s got two sons, his wife, who he loved very much, is dead, he brought up his two boys to the best of his abilities, and he wants to get out. And we have arrived in the first part of this piece where his dream is [indicates close distance] that far away. It’s in his fingertips. And it falls through. Someone’s betrayed him. He doesn’t know who, and then people are killed because of it. And on we go into basically a spiral of tragedy. And I like that aspect of the piece.

Thandie’s character, this undercover cop, is investigating him for criminal activity. And then they discover that they can help each other out. But it’s laying on a bed of trust and mistrust, which is an interesting dynamic, and a love affair, and basically, he goes from bad to worse and into a dark night of the soul, so to speak, but at the same time, he’s a wonderful human being. I wanted to make him such as he plunged his fist into the torso of existence and pulled it out. Broken as he ends up being, he’s got the heart of things, and he makes the best of it, and that’s what I like about the character.

AX: When you say his family is from the old country and the last name is Laszlo, where are they from?

CSOKAS: Supposedly, to me, it’s more symbolic [in terms of the character’s mindset]. He could well be Greek, he could beCzech. He happens to be Hungarian, but honestly, unless the embroidery in the house on the tablecloth was Hungarian, forget it. And we didn’t go down that road. So symbolically, he’s of theOld World. That’s what’s important. He becomes an archetype, a child of an immigrant.

AX: Did you always want to be an actor, or did you start out wanting to be something else, like a fireman?

AX: And did you do any research for anything in playing Jimmy, either into the shipping industry or parenting or anything else?

CSOKAS: There wasn’t enough time. There never is enough time. Somebody like Daniel Day-Lewis has a year to rehearse for LINCOLN, and what a wonderful job he did, but mostly, us mere mortals on a ten-part series, I just go over [the material] a thousand times and the imagination, as several people have said, is an attribute or a resource to plunge into. That’s where I land. And I did look at things – the best resource was Misha Glenny’s McMAFIA for the way of the world, that’s a great book about the contemporary crime world of all the different countries, but this is very different from that. I focused on the psychological, and from Shakespeare, MACBETH, KING LEAR, Greek tragedy generally and noir films, and the imagination, as I say, in terms of interpersonal relationships. One way or another, we’ve all been born into a family, and you have to make your way out of it as well. [Jimmy does] psychological projection onto the two sons, Alec, played by Joshua Sasse and Max, played by Matthew Beard. To be simplistic, Max was sort of the projection of what [Jimmy] would have liked to have been, and Alec is what he was at some point and didn’t want Alec to become, and well, we all know what it’s like to try and rein something in, try to promote something.

MACBETH, KING LEAR, Greek tragedy. Although the Russians – Dostoyevsky’s CRIME AND PUNISHMENT, if you’re going to quote the Russians, that’s a good place to start, because whomever you kill, then you have to live with that, and that’s what I [like], because I’m sick to death of seeing things where people die and it’s not interesting drama. If you can kill someone, if death doesn’t mean anything, then life doesn’t mean anything. To me, what was vital – in death, love, grief – everything had to mean something. And talk about the text, that was my thing – “Will this person kill me? Are they my friend, are they my enemy?” – in that sense, it’s great. And in that sense, the character becomes quite isolated and alone, and so the prospect of love and communication is greatly attractive and necessary.

CSOKAS: He finds out very early on. At first, no, and then he finds out, and the romantic leanings, shall we say, that were there are thwarted, and then on they go in this crazy tango in figuring out whether or not, from his point of view, what she says is true or not. It’s not enough for somebody to say, “I’m telling you the truth,” obviously, so that’s where the noir aspect of the story comes in for me. So he finds her really odd, so they constantly have this thing of, “Should I stay, should I go, should I trust, should I not?” But they need each other.

AX: You haven’t done a lot of television recently prior to ROGUE. Is ROGUE similar to your previous experiences working in television, or is it different?

CSOKAS: No, everything’s different. It’s all different – it depends on the combination of people. The cinematographer on this, Kieran McGuigan, was an excellent cinematographer who understood the psychology of the piece, and my fellow cast members were a different bunch of people with a different dynamic and the script is different, the story is different, the location is different. So [television productions] all have their challenges, they all have their joys. [They are] all very different. Although I have to say sometimes you have to fight for what you want. That sounds noble, but it’s a pain in the ass. And that’s important. Otherwise, you’re caught up in the machine, and that’s not pleasant. It’s not pleasant to fight it, either, but it’s worthwhile, because most of the time, they’re really happy with what you’re doing, because you can tell them why you’re doing it. They don’t always believe you at the time. Not to say that I’m always right, obviously, but if you can come up with a reason, a logic why [you’re doing what you’re doing], then best stick to your guns.

CSOKAS: NOAH. I just finished a small role in NOAH [with] Ray Winstone, Russell Crowe. DEAD EUROPE, which is an art-house film I did, that’ll be a slow burn, and what else? Getting on with my life.