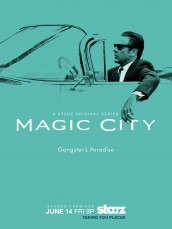 The show runner talks about the new season and beyond 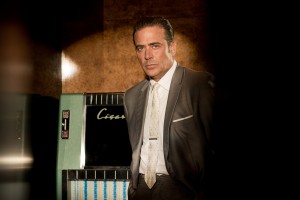 In MAGIC CITY, now in its second season on Starz Friday nights at 10 PM, things are more tense than ever for 1959-eraMiami hotel manager Ike Evans (Jeffrey Dean Morgan). He’s been to jail, he’s at odds with his not-so-silent partner Ben “the Butcher” Diamond (Danny Huston, who earned a Golden Globe nomination for his performance in first season), Ben’s boss Sy Berman (James Caan) has arrived on the scene, Ike’s wife (Olga Kurylenko) and sister-in-law (Kelly Lynch) are at odds and his sons are creating problems of their own. Additionally, the area is filling up with anti-Castro Cubans who have their own agendas. Clearly, Ike is one busy guy.

MAGIC CITY creator and show runner Mitch Glazer is likewise busy, but he has a lot of empathy for interviewers – he relates that he used to be one himself, recalling a moment when his recording equipment failed him. “I interviewed George Harrison in ’77 and literally, halfway through the interview, I went, ‘Oh, my God. Can we do this again?’ Fortunately, he was sweet.”

Glazer is similarly accommodating during a short break in his schedule at the Television Critics Association press tour.

ASSIGNMENT X: Did you have MAGIC CITY’s second season pretty mapped out when you started first season, or did you start doing it in earnest once you knew you had a pickup?

MITCH GLAZER: Both. I read Matt [Weiner] had a five-year plan for MAD MEN from the beginning. I just want to strangle him, I’m so jealous. But I did have a second year kind of outlined, but obviously, once you sit down, and we have a writers room this year – in the beginning, things get moved around and more focused, but I knew where I wanted to start the story and where I wanted it to end. Both things worked out.

AX: Do you know where the show may be going beyond second season?

GLAZER: I do have an end of the run – I have where I’m writing towards, where I want to go, and for third season, there’s so much emotion that I’ve actually set the table for myself, so I really do have a sense of third season. Beyond that, it gets a little murky, but also, for me, part of the joy is the spontaneity of where the story takes you, so if it was too complete and too seamless, then some of the fun of writing it would be gone for me. I like to let the story kind of dictate it sometimes.

GLAZER: I think the religion part of it wasn’t really in the forefront as much as that the Miami anti-Castro Cubans, to this day, have a real burning desire to get home. And so that became the engine for them – I mean, I grew up with the first wave of Cubans coming when I was in elementary school, and I was a Jewish kid in Miami Beach, and we loved it. It was so exciting and glamorous and exotic and the girls were cute, and the whole thing was amazing to us. I never sensed any kind of resentment or conflict. The Jewish community understood being dispossessed, so they were kind of welcoming, I think. But as far as the Mob, Sy Berman and Ben Diamond are Jewish mobsters.

AX: So there isn’t any more animosity toward them than there would be toward anyone who wasn’t part of whatever other mob they’re dealing with?

GLAZER: Exactly. “If they’re not my family …” I think that’s where it lands, really.

AX: What would you most like people to get out of Season 2 of MAGIC CITY?

GLAZER: The same as with the first, really, which is to be connected to this family and excited by the ride that they’re on and see similarities and differences. One of the joys of writing [a series set] in 1959 is that you get to kind of tell the story of our time through the lens of that period, and I’d love people to get lost in the world that we’ve created. For me, never having done this [run a series] before last season, when someone comes up to me and says, “I’m addicted,” or “I’m hooked,” or “You got me,” those kinds of things, I want to weep. It’s just the dream of any show runner or writer, to put these stories in motion, invent these characters and have people embrace them. So I think this season is more exciting, bigger and yet at the same time more intimate. I’m really thrilled. I hope you like it. It’s going to be good one.