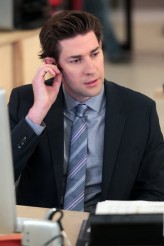 Exclusive Interview: John Krasinski on the end of THE OFFICE 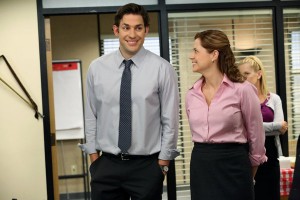 For nine seasons, NBC’s American version of THE OFFICE, a half-hour comedy developed by Greg Daniels from the British series created by Ricky Gervais & Stephen Merchant, has brought audiences into a seemingly mundane workplace that turned out to be a setting for hilarity, heartbreak and romance and for all nine seasons, John Krasinski has played the exceptionally decent Jim Halpert. Jim’s romance with coworker Pam Beesly (Jenna Fischer) has been one of the key plot threads throughout the series.

Massachusetts native Krasinski had a relatively short acting resume when THE OFFICE began on NBC in 2005. Since then, he’s starred in feature films, including LEATHERHEADS opposite George Clooney, written and directed the theatrical release BRIEF INTERVIEWS WITH HIDEOUS MEN, and collaborated with Matt Damon on the screenplay for last year’s PROMISED LAND, with both men starring in the movie under Gus Van Sant’s direction.

It was announced when THE OFFICE was picked up for a ninth season that it would be the show’s final year, giving the creative team time to wrap things up in a fitting manner. As the press is visiting the studio where THE OFFICE is shot, Krasinski stands in the doorway of the show’s warehouse set and gives his thoughts about his own journey with the series in this exclusive interview.

ASSIGNMENT X: Now, are you feeling a little sad that THE OFFICE is ending, like maybe there are things that you wanted to do that you didn’t get to do, or are you feeling like, “It’s time”?

JOHN KRASINSKI: There’s got to be a feeling of both. With a show that has been absolutely everything to me, I don’t know how you could ever feel like you’ve done everything there is to do. The show is too special [to feel] like it’ll ever be wrapped up by having done everything, but rather that it’s being wrapped up because this is a perfect time to do it in a lot of ways. I don’t think any of us are excited for it to wrap up – I think it’s more a feeling of it’s a tremendous honor to be asked to have a last season, rather than just sort of being kicked off and everybody wondering if we’re still on the air [laughs].

AX: Jim has been the heart of THE OFFICE in some ways. Have you pondered what that’s meant?

KRASINSKI: [laughs] No, I hadn’t pondered that until you asked it that way. Look, that’s an incredible thing, to be considered the heart of the show. I think the best part about our show is that there’s so much heart in each and every one of these characters. As funny and even as ridiculous as some of the situations can get, it’s all coming from a place of real character with different sides to every single character and no character is one-note. At some point, over the last nine years, we’ve experienced an emotional connection with these people, whether it’s love lost or aspirations dashed or whatever it is. That’s what I’ve always really been so proud of about the show. 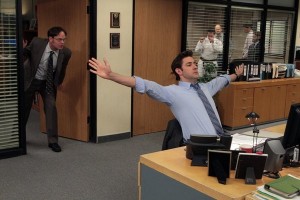 AX: You’ve had some amazing scenes with Rainn Wilson as Dwight Schrute …

KRASINSKI: From the moment I tested for this show, we did a couple improv scenes to see how we’d work together and it was incredible. I remember exactly what Rainn did and I remember how much fun I had and how hard I laughed and it’s never stopped for nine years, which is a real gift. And we have a lot of fun doing it.

AX: You’ve become a writer and a director and a movie star since THE OFFICE has been on the air. Did you have aspirations to write and direct before you got involved in this or did this fuel those? 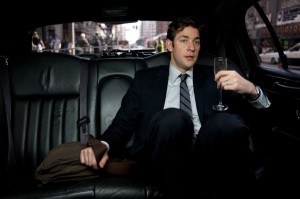 AX: Does acting encompass anything you liked about English teaching?

AX: When you started on THE OFFICE, especially knowing that the original British show ran only twelve episodes over two seasons, plus two specials, could you ever have fathomed that we would be standing here talking nine seasons later?

KRASINSKI: I can’t fathom it now. It’s totally – “surreal” is the most lackluster term I could use, and yet it’s the only one that’s coming to my head. It’s the most awesome thing I’ve been a part of. I was a waiter before I got the show, so for me, this is winning the lottery, being shot out of a cannon and everything all put into one. This is the most special thing I think I’ll be a part of, no matter what I do from here on out, there’s something about this show that will always partially define me, and I’m so proud of that.

Article Source: Assignment X
Article: Exclusive Interview with John Krasinski on the end of THE OFFICE