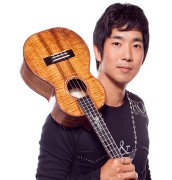 The ukulele-playing subject of a documentary talks about his music 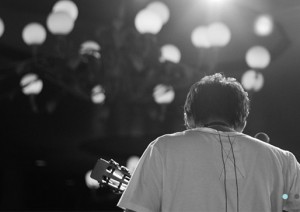 Jake Shimabukuro is a Hawaii-born ukulele virtuoso who shot to worldwide fame when a video of him playing George Harrison’s “While My Guitar Gently Weeps” in Central Park hit YouTube and went viral. Filmmaker Tadashi Nakamura has made a documentary about Shimabukuro, his success and his music in the documentary JAKE SHIMABUKURO: LIFE ON FOUR STRINGS, which airs tonight, Friday May 10, on PBS (check listings for local airtimes).

After giving a rousing mini-concert and doing a question-and-answer panel with Nakamura, Shimabukuro makes himself available for a follow-up discussion about his passion for the ukulele, which he pronounces the Hawaiian way, “Ooh-ku-le-le.” Surprisingly enough, BUFFY THE VAMPIRE SLAYER comes up in the conversation.

JAKE SHIMABUKURO: Well, you see my mom speaking in the film. She gave me really good advice, I think, when I was a kid. She said she doesn’t care what I do in life as long as I try to be the best at it and I enjoy it. And so when I decided to do music, I was in college, I had this band in Hawaii and I told her I want to try this and see what happens – I wanted to put school aside for a little bit. And she said, “Well, if you sincerely want to do this, if it makes you happy and if you’re going to practice and really give it your all, then I’ll support you one hundred percent.” And I guess that’s what led to all of this. Because once I started to do that, committed my life to music, my mom trusted that this was something I wanted to do and she supported me. And as you’ll see in the film, I think Tad [Nakamura] and I both share that whole Asian-American thing where you never want to dishonor your family, you never want to bring shame to the family name. And so my family has been the driving force behind everything I do. I mean, every time I’m playing, I play for them. Of course, I play for myself, too, because I love it, but it’s always because they believed in my and it’s become such a special instrument to me because it was passed on to me from my mom.

AX: Do you have people who you consider to be your peers in terms of playing the ukulele?

SHIMABUKURO: One of my favorite ukulele players was Eddie Kumai. In the Fifties, he had a group called the Sons of Hawaii, and they actually redefined the whole tradition of Hawaiian music. When we think of Hawaiian music now, it’s really what they created, because they brought in a lot of swing rhythms and all of that into the traditional music. Actually, they were even before Don Ho. Eddie Kumai was one of my favorites. Some of my favorite ukulele players today are people like Iz – he passed away already, but he had that beautiful arrangement of “Over the Rainbow,” and people like Eddie Vedder and of course James Hill is another wonderful player – so many young players now, it’s just fantastic.

AX: Are there other ukulele players that you jam with?

SHIMABUKURO: Oh, definitely. I mean, even my younger brother plays, so we have jam sessions at the house all the time. And of course, I have a lot of friends that play – a lot of people back home in Hawaii play this instrument. Even if they’re not professional players, everyone has one in their closet. They’ll take it out and play it at parties.

AX: Do you have a favorite musical genre to play?

SHIMABUKURO: Probably traditional Hawaiian music, because that’s what I started out playing, but I love it all. I really do. I don’t think so much about the genres, but they’re more songs. It doesn’t matter if it’s a jazz piece or a classical piece or what. Sometimes I’ll hear a tune and I just love it. Because I love jazz music, but there’s some music I don’t like. I don’t like it just because it’s jazz. There are usually specific songs.

AX: Do you have a favorite song to play?

SHIMABUKURO: Well, “While My Guitar Gently Weeps” is probably one of my favorites. George Harrison was one of my heroes, of course, and it’s really what started it all for me. But on my latest record, I just did an arrangement of Queen’s “Bohemian Rhapsody.”

AX: What’s your criterion for deciding if you want to play a particular piece?

SHIMABUKURO: Whenever I arrange a piece, especially if it’s a classic tune like that, I would never perform it if I felt like I couldn’t capture some of at least the essence of the song, and that was the hardest thing. Because anyone can play the right chords and the right melody, but to capture the spirit of the song, that’s always the thing.

AX: Does your ukulele have a name?

SHIMABUKURO: Well, it’s funny, because when I first got a tenor-sized ukulele, I named my ukulele Buffy. It was after the vampire slayer. So now, every time they make me a new ukulele, they call it Buffy Two, Buffy Three.

AX: Is it tricked out at all?

SHIMABUKURO: It has my initials in it. I know nothing about making ukuleles, so whenever they make custom ukes for me, I just tell them, “Whatever you think would be best.” And they experiment with some of the bracings, because I travel a lot, so it doesn’t roll around so much.

AX: At what point in the life of the YouTube video of you playing “While My Guitar Gently Weeps” did your life go from, working ukulele player to superstar?

SHIMABUKURO: I don’t know about “superstar” [laughs], but definitely when that video hit, I started getting a lot of calls from people. A lot of bands wanted me to tour with them or record with them or perform with them, so since that YouTube video, I’ve been able to play with Bela Fleck and the Flecktones, I opened for John Hiatt for a couple of shows, the whole Jimmy Buffett thing, Cyndi Lauper – it was really amazing. When I started to tour and I started coming over here [to the mainland U.S.] and playing and doing shows. It was amazing. When I first started coming over to the mainland, I was playing places like Indiana – I was like, “Who’s going to know me there?” [laughs], but I would show up there and I’d play “While My Guitar Gently Weeps” and everyone was just like “Yeah!” and screaming like it was a rock concert, and I just couldn’t believe it.

AX: Is there anyone you would especially like to perform with?

SHIMABUKURO: Oh, gosh. I would love to do something with Paul McCartney, just because it’s Paul McCartney. George Harrison would have been my first choice – but you know, Olivia Harrison did come to one of my shows. That was really special.