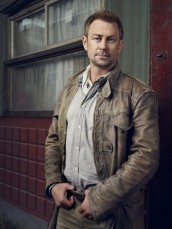 Exclusive Interview: Grant Bowler on his act of DEFIANCE – Part 1

The actor chats about working on Syfy's groundbreaking new series 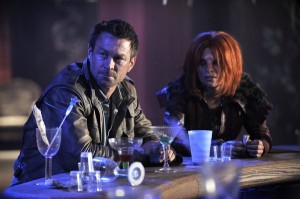 There are plenty of videogames that have been adapted from films and TV series, and plenty of films that have been adapted from videogames, but Syfy’s and Trion Worlds’ DEFIANCE is the first project to debut simultaneously as a narrative television show and a multi-platform video game. Both debut Monday, April 15, with the TV series having a two-hour premiere at 9 PM (its regular Monday timeslot thereafter).

In DEFIANCE, a space-going fleet carrying seven different alien races, collectively known as the Votan, arrived on Earth, resulting in huge changes in the landscape, flora and fauna. It’s been nine years since humans and aliens have declared peace, a movement that began in the city now known asDefiance, previously St. Louis,MO.

In a phone interview, Bowler talks about working in DEFIANCE’s brave new world.

ASSIGNMENT X: Are you originally from Australia or New Zealand?

GRANT BOWLER: Well, I’m a hybrid – my mum’s a Kiwi, my dad’s an Aussie. So I’m about as split down the middle as you can get. we call it Aussiewis. I was born inNew Zealand and I was raised in Australia. I went to Australia when I was six months old.

AX: Did you always want to an actor?

BOWLER: [laughs] I had no idea what I was going to be. I went to school in Australia, and there comes a time when you have to fill out your university preferences, and what courses you’d like to do. I actually got the guys who were a year below me at school to get their heads together and figure out the three things that I should put on my college application. No idea. Didn’t know. I wasn’t in a hurry to find out, either. So no, I didn’t always want to be an actor. It wasn’t on my radar, it wasn’t something that I thought I could do. I came from a part of Australia – my dad was a tradesman and my mum was self-employed. I didn’t really grow up anywhere near the arts or creative professions. So I thought I’d do something other people did, and I became a copywriter. I wrote advertising. And then one day, I was a junior copywriter, and I’d written this television commercial, a low-budget thing that they’d trust me with, and the senior copywriter had to take me out and supervise shooting the advertisement. And long story short, the guy that was meant to be in it never showed up. That was my first clue of what actors were like [laughs] and my lead copywriter, Harry, said to me, “Well, you do it.” I said, “What are you talking about? I can’t do that – all my buddies will beat me up if they see me on television.” He said, “Well, we’ll pay you the fee that we would have paid the bloke.” And I said, “Okay.” So I jumped up and I did the commercial and I caught the bug. I thought, “This is very cool.” Girls paid me attention because I was on TV, I got paid a good lump of money, my buddies beat me up, but it didn’t hurt enough to match the instant little tiny bit of credibility I got or the new shoes I bought, so I thought, “I’ll do this for a living.”

AX: So if you were going to write the ad copy for DEFIANCE, what would you say about it?

BOWLER: [laughs] I left [advertising] behind a long time ago. You think acting’s a nasty industry? Well, I like [executive producer/show runner] Kevin Murphy’s take on [DEFIANCE] ; I agree with it. DEFIANCE is actually essentially an immigrant story. It’s set against what are the ruins of our planet after a terrible conflict between the seven alien races and humanity, where everybody – all eight races – are trying to rebuild together.

AX: Are humans in this landscape also immigrants, or are they sort of like the Native Americans?

BOWLER: Both, actually. They’re the original inhabitants and the survivors, but also, the world has changed. It’s one of the story elements of DEFIANCE that I like the most. These kinds of stories always – and I mean always – have “somebody owns the land,” or somebody’s the original person, and then there’s the invader. DEFIANCE is lovely because the alien races didn’t come to invade – they came to emigrate. Because of fear and misunderstanding and prejudice, the wars kicked off, the result of which was that the world was physically transformed into a landscape that’s part Earth, but also part where [the Votan] come from. So what it does is, it puts everybody in the lifeboat, if you like. It puts everybody in the immigrant status.

AX: You’ve played a lot of people who are either in the business of enforcing the law or actively breaking it …

BOWLER: Yeah, I think I’m on one side or the other.

AX: Were you glad to be in another one of these roles, or did you think, “Now, how do I differentiate Jeb from the guys I’ve played before?”

BOWLER: Well, what I love about him is that he’s both [sheriff and outlaw]. even when he becomes Lawkeeper. This guy’s an ex-soldier and I particularly like that paradigm – putting an ex-soldier in the Lawkeeper’s position, and somebody who’s been on the other side of the law, who’s been a scavenger and a bounty hunter, and he’s done all of these things, so he understands – it’s almost like somebody who’s done time in prison becoming the sheriff. He gets the other side, he gets how they work, he gets how they operate. He’s far more of a pragmatist than he is an idealist. He’s an interesting one, and I haven’t played that before – I haven’t played that guy who really is far more concerned with justice than he is with the law.

AX: Have you played the father of a teenager before?

AX: How different is a female teenager like Irisa?

BOWLER: Female teenager – very, very different story. I just have to say, Stephanie Leonidas does the world’s most brilliant job of playing the most difficult teenager ever born.

AX: Do you have a daughter in real life? Are you afraid this is a preview of something?

BOWLER: I do have a daughter. She’s nine and whenever I go to work, I dread when she hits about fifteen. At the moment, she still writes me Valentine’s cards and sews me little love hearts to hang on the rear vision mirror of my car. So I’m safe for right now. We’re going to live together in a castle when she grows up. But I think in a few years’ time, we’re going to go through some other things.

AX: You appeared on FARSCAPE. Did you have to perform in alien makeup?

BOWLER: I had a seven-hour makeup on FARSCAPE. I remember getting there at three in the morning to shoot at ten. I did one episode and they shaved the sides of my head – I had a big Mohawk, they airbrushed me purple all over, they put gold leaf on my fingernails. Everything had to be done by hand, I couldn’t sit down, I couldn’t touch anything with my hands, I couldn’t eat, I couldn’t do anything. And I swore to myself two things when I finished that. I swore that I would never do the big prosthetic makeup thing again, and I’ve held to that. Some people are really good at it – they relax in the chair and they like the time that they get. It’s almost meditative, that time it takes. I’m the opposite of that. If I’m in the chair more than fifteen minutes, I start squirming – no good at sitting still. And the other thing I promised myself was I’d never do sci-fi again. We see how that has worked out.

AX: Now, does having had to do the makeup, albeit once and many years ago, give you sympathy for your costars who play aliens?

BOWLER: Yeah, I have enormous pity for them. I don’t know how they do it. It really is an exercise in patience. I mean, the results are wonderful and they’re very otherworldly and it’s wonderful as an actor to truly become something or someone else. And they look amazing when they’re done. But they can have that. I have the same wardrobe every day, I know what it is, and I think I maybe trim my beard and they put something in my hair and then I’m off to work. I’m happy with that. But yeah, I do feel pity for my cohorts who are the aliens. There are a few of them who have it pretty tough, actually. There are different things. Tony Curran [Datak Tarr] and Jaime Murray [Stahma Tarr], their makeup is very, very subtle, so they have to spend a lot of time in there getting it right. Stephanie has a big prosthetic on her head every day, and the wig, and the makeup. But then we’ve got Doc Yewll [Trenna Keating], who’s in another head [laughs] all day and can’t get out of it. So they suffer. Especially in summer. It’s really hard if you’ve got the big prosthetics in summer. It gets very hot in there.

AX: Was your casting in DEFIANCE because Rockne O’Bannon, one of DEFIANCE’s executive producers and developers, who had created FARSCAPE, remembered you from that, or is that a coincidence?

BOWLER: No, Rockne had just left, actually, when I came on. Kevin Murphy had just come on, and Rockne had gone off to do his pilot [for CULT]. Kevin knew me off a show that I did in New Zealand, funnily enough, called OUTRAGEOUS FORTUNE.

AX: When you went in to discuss the role, was there anything they told you about Jeb that was helpful in nailing him down?

BOWLER: Yeah, a lot. They’ve always got an idea of who the character is and it’s an exploration of fit – does that actor fit that character? And also, what else are you bringing to the party? Hopefully, there’s a bit of a dance there in terms of, you can tick all the boxes, but you can also bring other stuff that wasn’t there as well? So for me, this part of it is, they know what they want and they’re looking for something that will give them the dynamics they need to make a great show, and then, for my part, it’s what else is in there, what else can I mine out of that character, what can I bring, what do I want to have a conversation with an audience about, and what can I put on the table that makes it even better?

AX: Have you learned anything new about Jeb through playing him since you made the pilot?

BOWLER: Yes, he’s evolved. [Characters] do change. They go through things. It’s one of the nice things about doing television as opposed to film is, you go along with the character over a much bigger story arc and the character will grown and evolve and change and learn or fail or regress. They start to have their own lives. Their lifespan is so much bigger and their opportunity for experience, if you like, is so much greater. And Nolan has changed a lot. He’s definitely got a little better in social situations, that’s for sure.

AX: You as Jeb and Stephanie Leonidas as Irisa, sing the Johnny Cash song “Jackson” in the pilot. Did you know the song before you shot that scene?

BOWLER: Yeah, I did. I love that song. And Johnny Cash is one of my favorite recording artists of all time, so getting to sing “Jackson” was a) frightening and b) a huge buzz. I loved it.