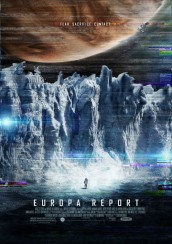 The filmmaker talks about his giant step for mankind, and found footage filmmaking 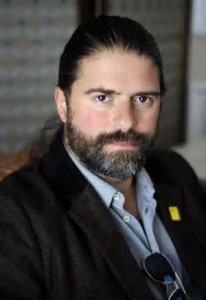 One thing you can be sure of when watching a video, VHS or Hi-8 that someone has salvaged is that those people we’re watching on any given media have met a dark end. This has increasingly become the same old “found footage” story that masks an excuse for shoddy filmmaking and amateurish acting, with everyone from teens to astronauts getting into the usually (and unfortunately) profitable act. That makes the findings of EUROPA REPORT the genre equivalent of discovering extra-terrestrial life.

Rarely has a format’s tired bones been jolted with a bravura display of technical savvy, excellent performances (including DISTRICT 9‘s Sharito Copley) and completely gripping suspense that transports the viewer into the confines of a spaceship bound for Jupiter’s moon – a place where science (not to mention 2010) has told us that some sort of existence might lie in the waters below an ice crust. It’s a voyage of exuberance that soon will turn to terror – even as its brave voyagers hold together their optimism that this doomed voyage has somehow all been worth it.

Conjuring the never-say-die spirit of THE RIGHT STUFF as much as it does the dread of ALIEN, EUROPA REPORT represents the supremely confident sci-fi level up of Ecuadorian filmmaker Sebastian Cordero. Having trained at USC, Cordero moved back to his native country, which he practically put on the cinematic map with the international festival hit RATAS, RATONES, RATEROS. Following up with that gritty crime thriller with the serial killer suspense of CRONICAS, the dangerously erotic RAGE and the drugs of PESCADOR, Cordero’s new, and biggest venture translates his talent for suspense to a realm where no one can hear you scream – at least during one especially awful mishap outside the Europa-bound mission.

Contrasting the happy talk of the mission controllers with a voyage that’s rapidly entering the twilight zone, Cordero’s absolutely believable EUROPA REPORT  gets high marks for how one filmmaker has blasted a cliché-bound genre to the heights of grippingly believable sci-fi effectiveness.

ASSIGNMENT X: There are so many “found footage” movies, and most of them are done sloppily, which makes the suspense and technical skill that EUROPA REPORT displays all the more astonishing. Did you watch these lesser genre entries to make sure your film wouldn’t make the same mistakes?

SEBASTIAN CORDERO: I think as filmmakers, sometimes we learn more from failures than stuff that does work. Because when you pinpoint what didn’t work about a movie, you can apply those lessons to your own movies. My approach when I got stared on this project was to be respectful to the audience. So many of these “found footage” pictures start out with an established set of rules, and then conveniently dismiss them. That really frustrates me as an audience member, and I dismiss the movie as well because of that.

So from the beginning of Europa Report, we had several things we had to abide with. I told our director of photography Enrique Chediak that we shouldn’t think of EUROPA REPORT from an aesthetic perspective. It’s about the logic of what we’re doing. This movie is shot with the monitoring cameras inside of the ship and spacesuits, and we weren’t going to break from that. In a strange way, we lost the ability to go for the usual filmmaking tools because of that. You couldn’t move in for a close up on a character’s big revelation. He needed to approach the camera in a way that would make the action happen organically. And if something breaks down, like the focusing system on our “hero” camera, then it had to stay out of focus the rest of the film. In a “normal” movie that would be unacceptable. But because of the “found footage” conceit, that kind of “mistake” adds a tremendous amount of tension. A character can deal with another crucial moment, and be slightly off screen to keep the suspense up. Found footage lets you work with a different set of “rules” in that way. And if you add them to the responsibility ot the realism, and science of the story, then you already have a lot to play with. Those challenges really paid off for us. 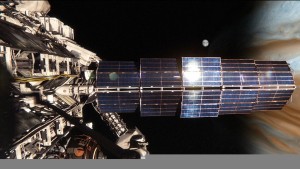 AX: You really believe that you’re out in space with the character. How did you achieve that kind of special effects realism without the budget of MAN OF STEEL?

CORDERO: We made EUROPA REPORT for around the vicinity of 8 million, which is still pretty tight for a science fiction movie that’s this ambitious. We had to choose which battles we were going to fight, and what our money shots were going to be. The movie doesn’t feel like that, but there were definitely limited resources along the way. But I think the decisions we made early on paid off. The interior of the spaceship was built on a soundstage, while everything outside is CGI. Honestly, up until the last week of post-production, I didn’t know if the movie was going to fall apart or not. Because one of the tricky things about all of this technology is that you don’t get to see the fully realized special effects until they’re there. And if they don’t work, you’re kind of screwed. So to make sure they do, you have to plan ahead, and be very involved in that process.

AX: Were you inspired at all by 1984s 2010, which had the cinema’s last exploration to Europa?

CORDERO: I saw it only once. I was a kid when 2010 first came out. I was a teenager at the time. I’d seen 2001 before as a kid. I loved the movie, but I didn’t understand any of it. Yet I thought it was an amazing experience. My memory is that 2010 didn’t quite work all together, but that there were some really interesting things about it. The film that gave me the biggest inspiration when prepping EUROPA REPORT was the documentary FOR ALL MANKIND, which was about the Apollo missions. It’s an amazing piece of filmmaking, and deals with how far mankind can go into space, and what’s implicit in that. We tried to permeate EUROPA REPORT with a lot of that feeling.

AX: How important was scientific accuracy to you?

CORDERO: Very important. I liked Philip Gelatt’s script because it approached space travel from a realistic viewpoint. We talked to scientists from the Jet Propulsion Laboratory and NASA to ensure EUROPA REPORT would be as accurate as possible. We did take some liberties with things we didn’t know about, especially when it came to what a mission might discover on Europa. We don’t know if they’ll find a microcellular organism, or something bigger. But there are a lot of realities that we know about space travel, and Europa, that we could incorporate into our story with the help of these great scientific minds. We visited SpaceX and consulted with marine biologists. There was a lot of work involved in EUROPA REPORT.  One scientist from JPL told me how frustrating it was to be consulted on films, where they tell them how easy it would be to fix certain things that the movies get wrong. And the filmmakers don’t listen to them for many reasons. But you don’t have to lose tension in a film just because you’re being scientifically accurate.  And at some points, you wonder if it’s all worth it. But all of that research really paid off. Ultimately, I feel in a movie like this it is. If you want people to believe that this mission could happen in the near future, then you need to convince them of that reality.

AX: One of the more terrifyingly convincing scenes is when a spacewalk goes wrong. 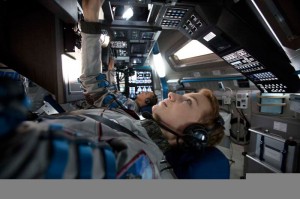 CORDERO: Even at the script stage, it was a scene that I thought could be really strong and effective, because it deals with one of our deepest fears – that we could survive for a long period of time being aware that we aren’t getting out of a situation alive. You’re contemplating that in an environment that’s reflecting what you’re going though, a void where you feel as insignificant as it can get. Though most of us might not be in danger of being put into that kind of situation, you completely connect with it in the film because that kind of fear is so primal.

AX: The alternately frightening and enthusiastic score by BATTLESTAR GALACTICA’s Bear McCreary is another huge factor in the movie’s emotional effectiveness.

CORDERO: Bear is a genius. EUROPA REPORT wouldn’t hold together the same way without his music. Before shooting the movie, I didn’t know what type of score we should have. I was even toying with he idea of playing more with sound design to see how we could achieve tension that way. Bear this very soaring, and inspiring effect that really humanizes the story, and helps us connect with the characters’ sense of awe and discovery. It’s one of the key elements that holds the movie together.

AX: There’s a lot of irony in EUROPA REPORT, especially when you contrast the happiness that the mission director in telling us how it was all “worth it” as you contrast her enthusiasm with the astronauts’ grisly fates. Yet with that being said, do you think EUROPA REPORT is inspirational in the end?

CORDERO: I think it probably could be. It does feel like there is a real inspirational side to the film. I think that the adventure that space travel holds, and discovering the unknown on new worlds is intrinsic to mankind’s desire. The sense of exploration is part of who we are. We want to discover the world we live in, and the worlds around us. The sacrifice that comes along with it is what makes this interesting. That’s something EUROPA REPORT exploits in a good way. Ultimately, the story is very tragic, and has a lot of irony. It constantly makes you think about those extreme situations. It’s almost like a textbook moral quiz. Who do you sacrifice if you’re faced with a certain situation? And where does the scientific mind stop and the human one begin?

AX: Do you foresee more found footage missions to EUROPA?

CORDERO: Who knows? That’s a hard one to answer. The movie definitely leaves you on a note where there could be another mission afterwards. That’s what would happen organically. But I don’t know what a sequel would do that isn’t already in this film.

AX: Do you think EUROPA REPORT ultimately shows much ambition you can actually have in a “found footage” movie?

CORDERO: I think the genre exists because there’s something fascinating about what it proposes. But that “footage” has to be there for a reason, and be intrinsically related to the story you’re telling. It shouldn’t be forced upon a film. During the process of making EUROPA REPORT, we found that our movie had its own visual language. It didn’t feel like a “found footage” movie along the way. We even thought that people would forget they were watching a “found footage” picture, so we put in a lot of graphics identifying each camera on the space ship to remind audience of what given perspective they’re watching the story from. It works really well. In the end, the happiest thing about EUROPA REPORT is that it doesn’t feel like a found footage, or science fiction film that’s been shot traditionally. That’s something I feel very proud about. I don’t think we’ve seen a high tech film depicted in this kind of way before.

Watch EUROPA REPORT on VOD, with its theatrical opening on August 2. Bear McCreary’s score will be available on the composer’s Sparks & Shadows record label