Home » would you rather review 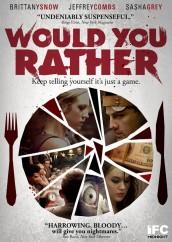 ©2013 IFC Midnight
WOULD YOU RATHER
Reviews

DVD/Blu-ray Review: WOULD YOU RATHER

In the game Truth or Dare, there are unspoken third and fourth options – a player can lie or opt out. No such possibilities exist in WOULD YOU RATHER, where a “game” of choices quickly escalates into mutilation and murder.

The set-up: Iris (Brittany Snow), hard-working but broke, is desperate to save her depressed brother, who will die if he doesn’t get very expensive medical treatment. In sweeps the Lambrick Foundation, headed by Shepard Lambrick (Jeffrey Combs). Every year, Lambrick chooses a deserving individual to receive a life-changing sum of money, plus a variety of benefits. He makes his decision on the recipient at a dinner party, and Iris is invited. When Iris accepts, she finds a mixed group – some friendly, some not – all more or less in her straits around a dinner table. Lambrick is there with his son and a few employees. People can leave before dinner and the game start, but once it commences, everyone must stay, and play, until the game is over – attempts to exit are met with summary execution.

And what is this game? It’s called “Would You Rather,” and starting tests include whether the player would prefer to stab the person next to him or her in the leg or perform a different act of similar violence upon someone else. It escalates from there.

Although a lot of graphic injuries occur just out of the frame line (this could be an aesthetic choice, a budgetary necessity, or both), everything that happens is designed to make us feel nearly as desperate as the characters, as the film invites us to ask ourselves the title question. What would we do given such unthinkable choices?

The film takes place almost entirely inside one house, which increases the claustrophobia and desperation, but what really sells it is that writer Steffen Schlachtenhaufen and director David Guy Levy have a strong sense of calibration – there are moments of black comedy, but there’s a sense of reality among the players that makes us buy into, and react to, what’s happening.

Snow shows a toughness and thoughtfulness here, while Combs finds an internal logic for the sadistic, tradition-minded Lambrick. Enver Gjokaj is a standout as a decent young man caught up in the proceedings and Sasha Grey is downright scary as a woman whose choices are unorthodox.

WOULD YOU RATHER is a horror film in the truest sense, opening up frightening doors in our minds and making us look at parts of ourselves. It’s not easy, but it is well-done and extremely compelling.

Article Source: Assignment X
Article: DVD/Blu-ray Review: WOULD YOU RATHER