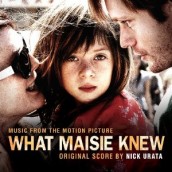 As a composer with a sensibility as rhythmic as it is eccentrically loopy, Devotchka’s Nick Urata has captured the ups and downs of adult relationships with such charming scores as CRAZY, STUPID, LOVE, RUBY SPARKS and ARTHUR NEWMAN. What makes WHAT MAISIE KNEW particularly striking is how gentle Urata is in his approach, but no less ironic as he evokes a children’s sensibility to depict a little girl who’s caught in a tug of war between her divorced parents and their new amours.

It’s an “Alice in Wonderland” approach where a fantasia of bells, gentle pianos, halting strings and a lulling female voice, make for an island of lullabye innocence where no mean adult sensibility dare intrude. In that respect, MAISE’s blissfulness that couldn’t be more knowing. And as a listen, it’s hard to imagine a lyrical soundtrack that’s better to put on to get a kid to sleep at bedtime, which is no small complement to Urata’s accordion-topped charms. While Lucy Schwartz contributes the soothing “Feeling of Being,” the only indication that this G-rated album is for an R-film is when Urata yields to star Jullianne Moore, who accompanies The Kills for “Hook and Line” and “Night Train.”

Playing a rock and roll mom, Moore shows herself a punk at the ready as she angrily powers in Joan Jett fashion through these numbers that give WHAT MAISIE KNEW an unexpected punk kick.

Clink on the link to Purchase WHAT MAISIE KNEW soundtrack