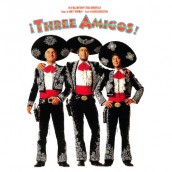 Credit longtime Elmer Bernstein fan (and family friend) John Landis as the guy who thought the composer’s important orchestral style could be applied to hilarious ends by being played straight in ANIMAL HOUSE. It was a film that made Bernstein an inadvertent king of comedy by unwinkingly using his old-school sound for the likes of AIRPLANE! STRIPES and GHOSTBUSTERS. So it was natural that Landis would call on Bernstein to inadvertently spoof the Oscar-nominated western sound of TRUE GRIT and THE MAGNIFICENT SEVEN for three not-so magnificent silent movie stars fooled into becoming real heroes in 1986’s THREE AMIGOS!

Bernstein’s Latin-accented guitar and swooning romantic string rhythms are the perfect music-only accompaniment for Tom Mix riding the Mexican Mariachi range. Except in this talkie, it does its best to make the haplessly swaggering team of Lucky Day, Dusty Bottoms and Ned Nederlander seem remotely capable of taking on the villainous El Guapo. Brazenly thematic in a way that almost seems ancient now, it’s no laughing matter that Bernstein’s rousingly heroic score stands not only as one of his best western works, but a soundtrack that won over a whole new generation of fans with this, eminently watchable, and quotable movie. Going from scenic canter to furious percussive gallop to rally against south-of-the-Hollywood border villainy, THREE AMIGOS! also manages to capture the sweet, ultimately noble heart of these bumbling actors that’s no small measure to this film’s cult appeal. As a simultaneous spoof and valentine to westerns’ golden era,

THREE AMIGOS! is smart to incorporate numerous song salutes to the genre of “singing cowboys,” created by none other than Randy Newman. While that legendary songwriter might be hilariously garbled as the singing bush, stars Steve Martin, Chevy Chase and Martin Short acquit themselves more than honorably with the ballads “My Little Buttercup” and the truly beautiful guitar serenade of “Blue Shadows On the Trail,” even when accompanied by a “bum-bum-bum-bum” horse chorus.

THREE AMIGOS! was just about a perfectly sequenced album between songs, score and choice dialogue cuts when it first came out on Warner Bros. LP. But it’s never sounded better than on Perseverance’s remastered CD that gives these buddies even more salutary oomph.

Clink on the link to buy the THREE AMIGOS! soundtrack