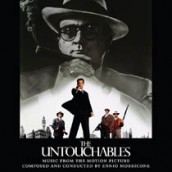 Ennio Morricone has never been better then when composing for Sergio Leone’s epics of American gangster-ism, whether it was committed in dust busters for ONCE UPON A TIME IN THE WEST, or in the flashy 30s hood attire of ONCE UPON A TIME IN AMERICA. So it seemed only natural when the Italian maestro finally pulled a job for crime-obsessed director Brian De Palma, whose 1987 take on THE UNTOUCHABLES remains not only one of the best TV-to-film translations ever, but a picture where De Palma’s stylistic swagger was a perfect fit for Morricone’s, propelling him to made man status in Hollywood with a box office hit and an Oscar nomination for Best Score.

1930s Chicago seems like it could just as well be the Old West in how Morricone plays these “modern” day outlaws and sheriffs going to war, villainy presented by a squint-eyed harmonica and dark, calculating rhythms that go in for the kill, all while nobility takes on trumpeting heroism with music that’s absolutely convinced in its sense of soaring justice.

The amount of memorable themes that Morricone goes for in THE UNTOUCHABLES are almost dizzying, let alone when music box bells bringing on the BATTLESHIP POTEMKIN train station shoot-out for “Machine Gun Lullaby.” Morricone is in slow motion synch with De Palma’s Hitchockian-Eisensteinian staging as the delicate sound of innocence is gradually overwhelmed by the composer’s trademarked used of near-dissonant string counterpoint. But if there’s one melody that truly rips your heart out, then it’s the “Death theme,” the score hauntingly showing the terrible, human cost of Elliot Ness’ fight as the toll among his gangster squad rises, it’s power no more gut-wrenching then when accompanying the death of Sean Connery’s old school cop.

As it captures every bit of his blood-choking sacrifice in Ness’ arms, Morricone goes beyond even this on screen anguish to capture the emotion of watching one of the screen’s great, invincibly heroic icons finally meeting his end in a scene ranks as one of the composer’s most emotionally devastating moments.

Spread over two CD’s (which include the original A&M soundtrack presentation), this complete presentation THE UNTOUCHABLES really brings home the score’s Prohibition sound for the Chicago Way, especially as it contrasts the carousing jazz of Al Capone’s den of sin with the fatalistic, noir-sax sound of Ness. A bunch of alternates also kill off the Celeste and sax from the station shoot-out and rooftop chase, the album ending with the premiere of “Love Theme Form ‘The Untouchables.” “Come See the Paradise’s” Randy Edelman was charged with putting words to Morricone’s Death Theme for a song that inevitability, if valiantly, offers far more sadness than romance.

Click on Link: To Purchase the THE UNTOUCHABLES soundtrack