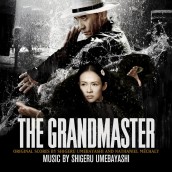 If anything, Wong Kar-Wai’s movies are about the lack of movement, an overrated auteur reputation built on languid pacing and dreamily unreadable characters. All of this makes his choice to make a high-kicking Ip Man picture all the more surprising, and for once interesting. As expected, THE GRANDMASTER comes across as the artsiest Hong Kong chopsocky movie ever made, a stunning visual poetry that often beats down the always-spectacular action choreography by MATRIX master Yuen Woo-Ping. That leaves two musical martial artists named Shigeru Umebayashi and Nathaniel Mechaly to really do the heavy lifting when it comes to conveying physical motion, and inner emotion.

While his music has sensuously glided along with Wei’s tone poems during IN THE MOOD FOR LOVE and 2046, Japan’s Umebayashi has also given more physical grace to such HK costume kickers as HOUSE OF FLYING DAGGERS and FEARLESS, while France’s Mechaly has shown a special set of viscerally rhythmic skills in two TAKEN movies. It’s an international meeting of muscular melody that heralds gorgeous results in GRANDMASTER. While drawing on Asian percussion and the sinuous winds of the Erhu (musical ethnicity that immediately conveys costumed action), the pain here is most effectively heard from the heart in a beautiful, unrequited “Love theme” expressed on the piano and Erhu, or told with a delicate orchestral touch. But even if they express grace in a “Manchurian Bolero,” that doesn’t mean the duo don’t deliver the requisite footwork that conveys the stuff of Bruce Lee-training legend, from the imposing orchestral-percussion of “The Gold Pavilion” and “Manchuria Express” to the beat-down drumming of the self-evidently titled “Action 150.” As it delivers the percussive music the genre demands, THE GRANDMASTER also conveys the intellectual acrobatic that unites the different schools of combat these characters constantly test themselves on.

Perhaps THE GRANDMASTER‘s deftest move is bringing a some unexpected tunes into the soundtrack that only elevate its elegance, not only offering “Casta Diva” from the opera “Norman,” but also “La Donna Romantica” and “Deborah’s Theme” by the true film scoring grandmaster Ennio Morricone. Hearing the composer’s telltale, beautifully aching gift for tragedy (not to mention his immediately recognizable music from ONCE UPON A TIME IN AMERICA) gives this movie a true emotional gut punch that almost comes out of nowhere, conveying the ultimately price paid for being number one with fist, foot and sword.