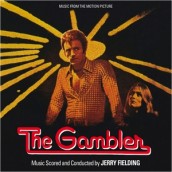 CD Review: THE GAMBLER and BEYOND THE POSEIDON ADVENTURE soundtracks

Jerry Fielding tackles the disaster of addiction and an upturned ship 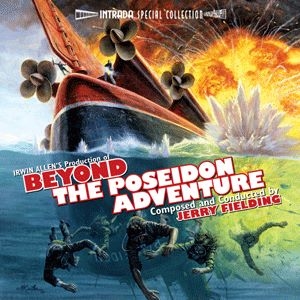 Jerry Fielding was a composer who set a new high bar for tough guy expressionism in film music, taking an uncompromising, and often primally dissonant approach for such seething orchestral blood rites as THE WILD BUNCH, THE OUTFIT and LAWMAN. Now the new releases of THE GAMBLER and BEYOND THE POSEIDON ADVENTURE offer a rich contrast in Fielding intensity, subduing his voice for a modern classicist, and then pouring on the danger for the Master of Disaster.

If Gustav Mahler had become a film composer, it’s arguable that his often brooding, string-heavy style might have sounded something like Jerry Fielding’s – which makes the latter all the more ideal to adapt Mahler’s for 1974s  THE GAMBLER. Twisting about “Symphony No. 1” to use as the film’s score was but one of the many audacious choices that Karel Reisz made to embody screenwriter James Toback’s autobiographical anti-hero, a literature professor with a self-destructive taste for betting. It’s music full of tumultuous romance and sometimes snarling attitude, a perfect fit for an academic who’s chosen to surround himself with criminal types. Fielding is right at home with both the character, and the far more erudite Mahler, giving a passionate rendition of this towering work. Fielding’s own, far lighter jazz chops can be heard with the easily listening twang and urban funk of the prof’s lowlife associates in a source section that also offers a pleasant, extended bit of Fielding tickling the ivories. Quartet’s impressive release of THE GAMBLER shows off Fielding’s hand as a master of adaptation for this daring, and wholly successful exercise in adapting a classical piece to the boundaries of film scoring, capturing a character’s romance with his dark side, while allowing a composer also in love with it to seamlessly slip his own trick cards into the mix – a collaboration incisively revealed in John Takis’ liner notes.

A sequel that’s not as bad as you’d think, but still not in the same league as the iconic original is 1979s BEYOND THE POSEIDON ADVENTURE, which had Irwin Allen (now in the director’s chair) returning us to hell upside down, with Michael Caine’s self-centered privateer getting far more stray passengers than booty on his salvage mission. But perhaps the biggest challenge lay in wait for Jerry Fielding, who had to face the ghost of John Williams’ Oscar-nominated score. While retaining its spirit of combining doom and gloom with never-say-die, ever-surging bravery, Fielding took his own route down to the topside. For his last major studio film score, Fielding would also be tasked with writing way more music this time out, especially given that “Beyond” was far more of an straight-up action film given its gun battles with a nefarious Telly Savalas. For all of its winding passageways and compartments, Fielding’s score is straight up in its orchestral approach, brass, eerie strings and bubbling percussion providing a sense of waterlogged claustrophobia, with strings and a mournful horn signaling empathy. While the brooding, oppressive spirit that signaled Fielding’s breakthrough work is very much present, it’s nice to know that his studio run would end here with an overall sense of swirling bravery amidst the gloom, with one theme even sounding a bit like “The Morning After.” While Jeff Bond does a yeoman job of chronicling Intrada’s complete release of the score, BEYOND THE POSEIDON ADVENTURE  is worth getting for Nick Redman’s liner notes as much as the score itself. A gripping journalistic presence on what seems to be just about every Fielding album, Redman wraps up the composer’s too-short career with a loving, hard-broiled touch that makes you feel like he was the composer’s drinking buddy. Redman’s work stands as the most personable liner note depiction of a man’s man whose all-consuming dedication ultimately did him in – though not before leaving behind a worthy legacy represented on these two under-the-radar releases.
Clink on the link to purchase THE GAMBLER soundtrack

Article Source: Assignment X
Article: CD Review of THE GAMBLER and BEYOND THE POSEIDON ADVENTURE soundtracks