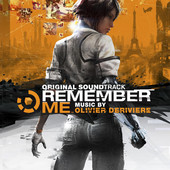 Olivier Derivière’s name first dealt with amnesia in his videogame soundtrack for 2008s ALONE IN THE DARK, where a memory-wiped tough guy battled demons in an apocalyptic NYC. Now he’s back in who-am-I style for Nilin, an acrobatic ass-kicker from 2084 Neo-Paris that really levels up for this French musician with his new game score for REMEMBER ME. As Nilin seeks to reclaim her past while re-arranging the memories of others, Derivière comes up with a striking approach that might be best described as a trip-hop spin on Don Davis’ scores for THE MATRIX series. Here it’s given a brighter symphonic sound for a more pleasant dystopia, a swirling sense of wonder that also brings to mind Eric Serra’s gleeful orchestra approach in playing future Manhattan for the French-made FIFTH ELEMENT.

With an orchestra as full of depth as this colorful cityscape, Derivière gives his action an uncommon sense of bold, melodic construction. But just when you’ve got a grip on the kind of music that neo-punk heroes do their best moves to, Derivière brings in reversed-synth effects to stop the music dead in its track, warping and modeling it in much the same fashion as Nilin to bend musical time and space. Rock and electronics seamlessly combine with the strings, with weird theremin-like samples that might make some listeners think that a 70s-era Tardis is about to appear. But while past sci-fi state of the art scores are apparent, memorable REMEMBER ME is mostly about Derivière picking up his own mental clues to create an exhilarating start-and-stop action score, warping about with a constant sense of invention and excitement that rivals just about any big screen genre score this year.

Clink on the link to Purchase the REMEMBER ME soundtrack