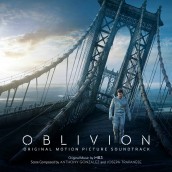 Architect-turned-director Joseph Kosinski is promising to become the multiplex answer to Stanley Kubrick after the almost shocking, mind-blowing intelligence he’s brought to TRON LEGACY and his latest, terrific trip into sci-fi dystopia OBLIVION. If there’s a style of music that complements his icily beautiful visual sensibility, then it’s a fusion of strings and electronics, all the better to convey high technology dining on ashes. Kosinki’s cutting edge made him seek out the French band Daft Punk to capture the neon-black groove of TRON. Now he’s brought in that country’s similarly evolutionary (and temporarily one-man band) M83 for OBLIVION to play a future that’s musically based more on flesh and blood for all of the super-cool circuitry at work. The result is a warmer, more orchestral sound credited to Anthony Gonzales, with a more than assist by Joseph Trapanese. The latter’s the musician who helped Punk keep their alt. street cred while helping to make their pulse work relatively sound like film music. Thankfully, Trapanese is no longer the sideman here, with even more telling results.

The spirit of TRON LEGACY is very much a part of OBLIVION, from its spotlessly designed hardware to a luxurious techno-organic score. However, the music’s more evolved, perhaps a bit less conscious about being artily accessible. Lush, hyper-melodic washes of strings and synth pulses grace the post-apocalyptic landscape, adding to the “wow” factor of one spectacularly ruined vision after the next. The effect of this drifting, always melodic score is one of wondrous contemplation, giving the sense of an earth waiting to be rediscovered, and reborn, an pseudo-acid trip tone that has much in common with the headtrip movies of the 70s that Kosinksi’s modeling OBLIVION after, along with every other great genre-mash movie from THE MATRIX to THE TERMINATOR. But that’s not to say that OBLIVION doesn’t lack for solid suspense as the pieces of its truly surprising (if already done-that) mystery falls into place. But the neatest cue here is spun from more tradition popcorn action, as the beats for a “Canyon Battle” chase between glider and a killer drone armada builds into a raging exercise in electro-orchestral ramp ups, reaching such a dazzling level of hyper beat excitement that the listener’s pulse rate can’t help but go into overdrive. But having the best action piece in any score so far this year (and certainly the coolest since Zimmer’s INCEPTION) doesn’t negate the sense of human-played instrumental emotion that makes the constantly mesmerizing, and very thematic OBLIVION anything but a musically empty trip to 2077.

OBLIVION cannily comes in two versions, its “Deluxe Edition” e-album, fully packed with M83’s instrumentals, while the hard copy contains OBLIVION, a vocal version of its theme passionately rendered by Norwegian singer Susanne Sundfer. It’s an Oscar-nom worthy power ballad that socks over the film’s well-deserved sense of importance, and humanity for a score, and film that’s about the ghost in a machine, as opposed to letting the latter coldly take over.

Clink on the link to to purchase the OBLIVION soundtrack

Clink on the link to buy OBLIVION SPECIAL EDITION soundtrack